Vinales qualified fourth in Barcelona, and harbours high hopes for the race, having been among the fastest riders on worn tyres throughout practice.

But the Spaniard has lost ground on the opening lap in all but one of this year's six races so far - and was particularly hampered in Mugello, where he started on the front row but dropped to as low as 11th.

Ahead of the Barcelona weekend, Vinales believed his slump at the beginning of the Italian Grand Prix was down to a lack of temperature in his tyres.

Asked how he and Yamaha would look to avoid a similar situation in Barcelona, Vinales said: "We understand why, and that's the important [thing].

"So for sure I will approach the sighting lap and the warm-up lap differently, pushing a little bit more and warming up the tyres much more.

"I think it was important to know that and for sure let's see if with that we can solve the problem of the first lap."

Vinales spent much of the weekend working on race pace, having dedicated most of Friday's track action to running with "a full tank", according to team director Massimo Meregalli.

"I expect a good result, honestly," Vinales said after qualifying. "Because I always work [to improve] race set-up, always, every exit. So I think we can do it well.

"Rear grip is really good actually on the bike, we just have to hope to have a good front tyre and push from the beginning.

"There is many riders that are really strong, but for sure, fighting [up] there, I am convinced that we can do it." 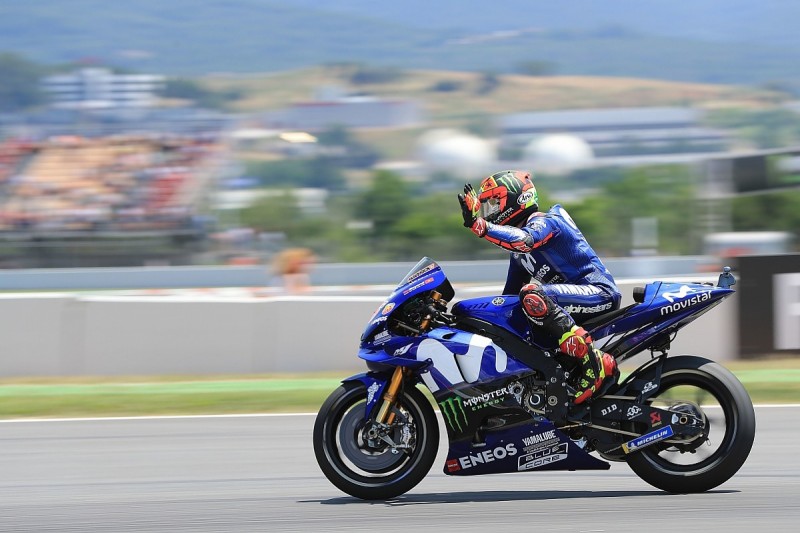 The Spaniard had topped the Barcelona in-season test day back in May, but came up 0.465s short of Jorge Lorenzo's pole time in qualifying.

"Actually the test was [with] better grip, through all the track and [it was] not so hot as today," Vinales recalled.

"But anyway I'm happy because in the test I didn't do the rhythm that I did in FP4. So I think [that] was good, I'm quite confident."

While Yamaha has long seemed to struggle in hotter conditions, the Spaniard was encouraged by how his YZR-M1 has coped with warmer weather this weekend.

"I'm happy because the bike didn't change so much this weekend, luckily. I can push the same all the practices," he said.