A storm on Friday morning meant parts of the Barcelona circuit - which now has a reconfigured final chicane - remained damp when running started, with riders venturing out on wets.

The circuit was essentially too dry for wet tyres so the majority stayed in their garages, with only six riders recording times in the first 15 minutes.

Jorge Lorenzo became the seventh, moving to the top with a 1m55.452s for Ducati to displace Tech3 Yamaha's Jonas Folger before improving to a 1m54.940s nearing the halfway mark.

Folger's Tech3 team-mate Johann Zarco became the first rider to try slicks with 20 minutes remaining, making a pair of mistakes on his maiden flying lap and running nearly 1.7 seconds up on his next before pitting.

Instead it was Marc VDS Honda's Jack Miller logging the opening time on slicks, a 1m53.498s with a mistake to use the 2016-spec Formula 1 chicane to go fastest.

Folger and Miller then made significant inroads, the German getting down to a 1m50.277s, but Miller's times were wiped for his ongoing use of the wrong chicane.

Miller continued to circulate quickly - despite Marc VDS trying to get him to pit - and the Australian was eventually blackflagged, before realising his error. 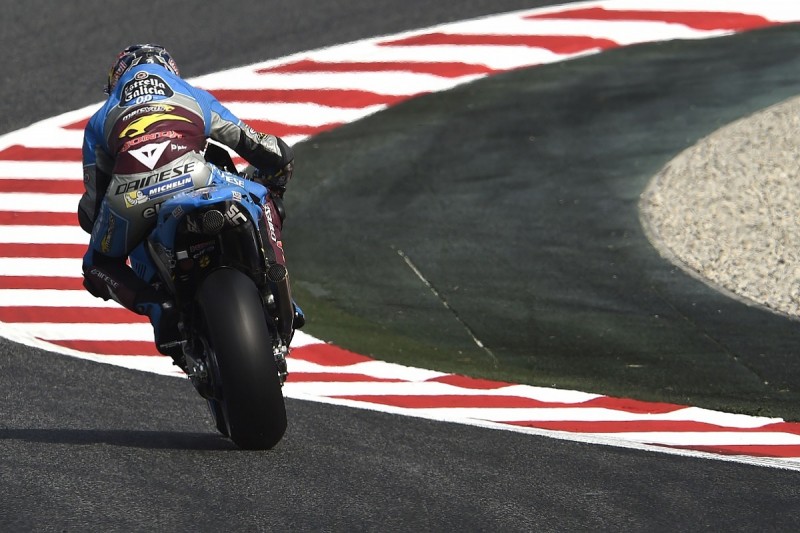 Folger, Pramac Ducati's Scott Redding and Zarco traded fastest laps as times dropped below the 1m48s barrier with four minutes remaining, and then 1m47s with Crutchlow and Marquez shortly afterwards.

Marquez then turned a 1m45.875s entering the final 60 seconds, a lap that was not bettered as the reigning world champion started his home grand prix weekend fastest.

Crutchlow finished second, the LCR Honda rider 0.326s slower than Marquez, while Mugello winner Andrea Dovizioso led a host of riders who improved after the chequered flag to finish third on his Ducati.

Marquez's team-mate Dani Pedrosa was fourth, ahead of Folger, with championship leader Maverick Vinales finishing sixth and within one second of the pace.

Yamaha was the only leading team not to test at Barcelona and sample the new layout following the French Grand Prix last month, and Vinales' team-mate Valentino Rossi wound up 17th.

Miller rejoined the session and set a time good enough for 12th, just ahead of Lorenzo, 2.236s off the pace set by Marquez.

Cal Crutchlow has 'good options' beyond LCR for 2018 MotoGP season