While the morning session was hampered by a drying Barcelona circuit, the riders faced no such hurdles in the afternoon.

Marquez led the way in first practice and displaced Ducati's Andrea Dovizioso at the top with a 1m45.159s to lead the way for the bulk of the 45 minutes by 0.026 seconds.

Alvaro Bautista was the first rider to crash in the session - at the new Turn 14 chicane with 15 minutes to go - falling again as he tried to get his Aspar Ducati going.

Bautista regrouped on his second bike and became the first rider to make a big move on a soft rear tyre, jumping from 13th to third with seven minutes remaining.

The next time around, he pipped Marquez with a 1m45.116s lap, as Dani Pedrosa jumped up to second in a lead quartet covered by just 0.069s.

Pedrosa also went faster on his subsequent flying lap, setting the new fastest time of the day - a 1m45.098s - with three minutes to go. 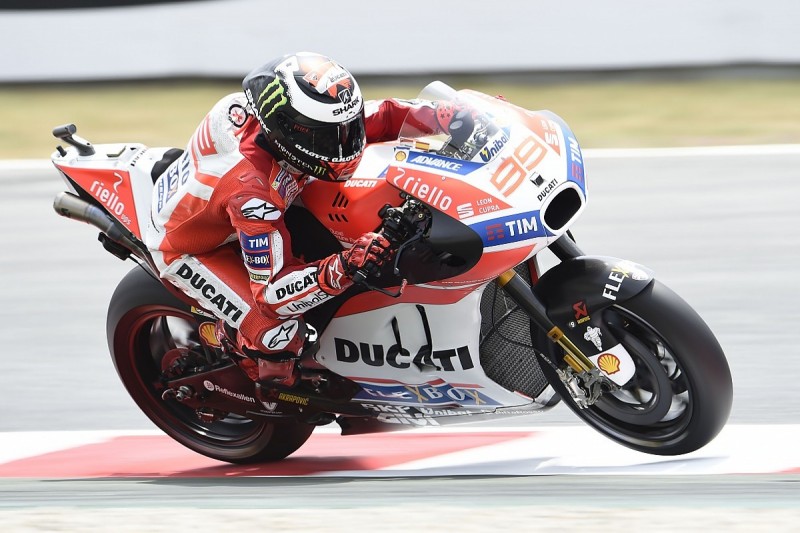 Lorenzo then leapt to the top, and by nearly four tenths, with a 1m44.700s, before Marquez reasserted his authority.

Bautista eventually finished ninth, not improving with his last laps, just ahead of Valentino Rossi.

It was a tough afternoon for Yamaha, the only leading team to miss last month's pre-event test at the reconfigured Barcelona layout, with Vinales finishing 16th, 1.515s off the pace.

Avintia Ducati pair Hector Barbera and Loris Baz both had falls in the final third of the session, Barbera finishing 11th and Baz 15th.

Cal Crutchlow was the other rider who crashed - at Turn 5 starting his final run - and the LCR Honda rider wound up 19th, but within 1.672s of the top in a tight session.