Aprilia is talking to other riders about replacing the contracted Sam Lowes in 2018, if the MotoGP rookie cannot "quickly show some improvement", racing manager Romano Albesiano admits

Lowes graduated to MotoGP in 2017 after three seasons in Moto2, having won a pair of races in the class with Gresini - which runs Aprilia's programme - last year.

Contracted through until the end of 2018, Lowes is 24th in the points after seven races with a best finish of 14th at Le Mans, and a best qualifying position of 20th at Austin.

The Briton is confident that he is making progress, and spoke out about feeling a lack of respect in the team during the Catalunya Grand Prix weekend, after reports Aprilia could replace him emerged.

Albesiano said Aprilia was keeping its options open, but its priority was to see more from Lowes.

"It's very clear, we made a big investment with Sam," he said.

"As his first supporter, we really hope that he can quickly show some improvement.

"But at the same time we have to prepare next season in case this will not happen.

"So we are talking with some other riders because of this."

Asked what was expected from Lowes, Albesiano replied: "To show improvement. To show to ride at the right point quite soon."

He added that there was no "clear deadline" on making a decision, with Andrea Iannone linked to a move just seven races into his two-year deal with Suzuki.

Iannone joined the Suzuki from Ducati to replace Maverick Vinales, but is 15th in the championship having scored in only three of the seven races.

"For us what really matters is the performance of the riders," Albesiano said.

"So if he's Italian it's OK but if he's from Singapore it's good as well." 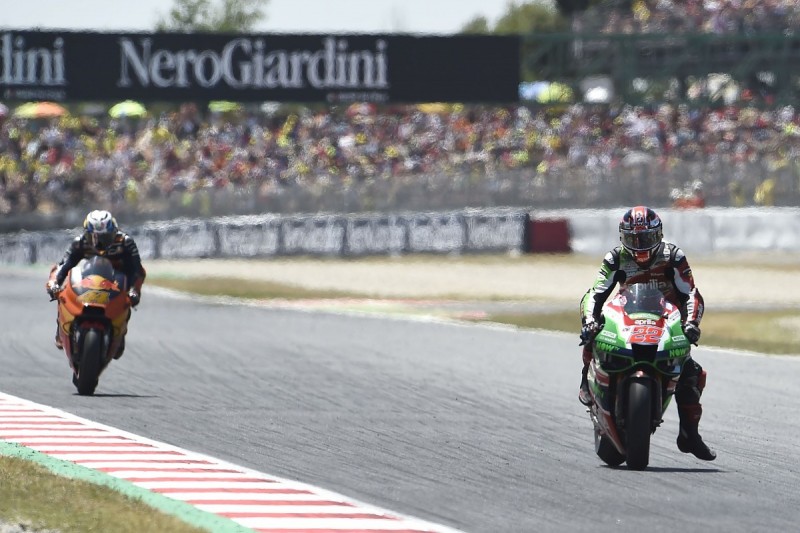 Aleix Espargaro was signed by Aprilia from Suzuki to lead its programme in 2017, but his pace has been tempered by errors and mechanical problems.

Having spoken publicly in support of his rookie team-mate previously, Espargaro said he is unhappy with speculation about Lowes's future, so early into the season.

"I read something about my team-mate for next year, I was very angry," he said.

"It's race five or race six and I think we need to have more respect for a rider that last season won races [in Moto2].

"We cannot forget these things in just fucking three months.

"We need to have more respect, we need to give more time to Sam - he's a talented rider.

"If we arrive in Valencia and his results are still not competitive, you can think about something, but not in June."