The Petronas SRT rider was due to ride current-spec machinery in 2020, but ahead of pre-season testing Yamaha decided to keep him on what it dubbed the 'A-spec' bike - which was effectively the 2019 version.

Despite this, Morbidelli went on to score three victories in 2020 (equal with team-mate Fabio Quartararo) and ended up as top Yamaha rider in runner-up spot in the championship.

PLUS: How Yamaha's MotoGP engine woes haunted it in Portugal

Morbidelli praised Yamaha for the "good package" he was supplied with, as the 'A-spec' bike proved to be more consistent than the 2020 version, but admits its decision to give him the older machine in the first place made him feel devalued.

"Huge congratulations to the team, huge thanks to Yamaha as well who supplied me with a good package, even though I can't hide that I was feeling maybe the fourth strongest this year," he said after finishing third in Portugal last month.

"In the beginning of the year we were able to exploit the maximum from what we had and actually it came out very good, very well. 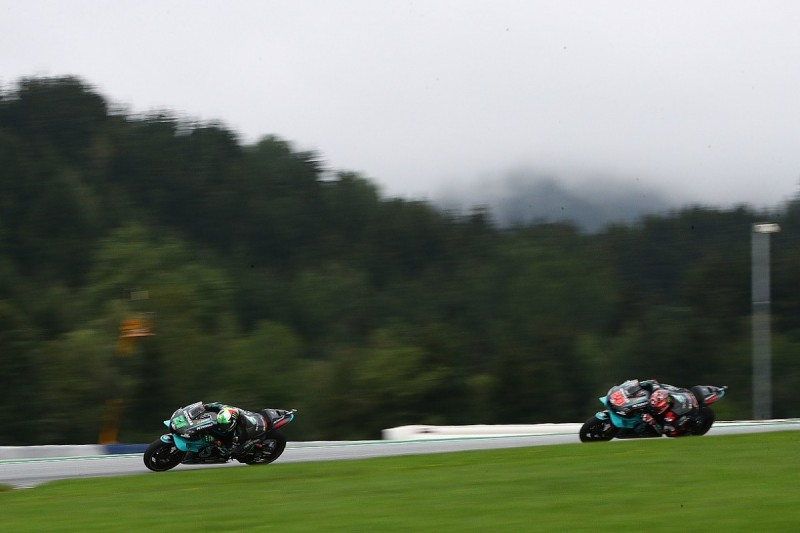 When asked by Autosport if he felt Yamaha underestimated his abilities, Morbidelli didn't believe this was the case - just that he was rated lowest by the marque out of Fabio Quartararo, Maverick Vinales and Valentino Rossi.

"Yeah, I don't feel underestimated," he said. "I just know that in Yamaha there are three strong riders and the choice of who to give what is very difficult, because all the riders in Yamaha are very, very strong, so I didn't feel like I'm underestimated.

"I just had the lowest, maybe, rating inside Yamaha's understanding, let's say.

"I hope that this championship will make my rating and level grow inside Yamaha's judgement. That's what I hope.

"But I didn't feel underestimated. No, it's just that in Yamaha there is a great rivalry and a great level between the riders.

"All riders in Yamaha are super, super strong. Valentino has a huge experience and he's super good in riding and setting up the bike.

"Fabio is super-fast and Maverick as well is super-fast. So, it's a great battle between the riders because these riders are very strong.

"I didn't feel underestimated, I just felt maybe the last one [within the marque] but that's OK."

Morbidelli will remain as the only Yamaha rider without current factory machinery in 2021 despite being its top rider this year.