Ahead of the first race in the final triple-header of the 2020 season, 32 points covers the top six in the championship, with Joan Mir on the Suzuki leading Petronas SRT's Quartararo by 14 points.

The Pramac rider was soon deposed by Ducati stablemate and Le Mans winner in wet conditions Danilo Petrucci, who set a brace of session-best efforts culminating in a 1m43.235s.

However, Miller ensured Petrucci's stint at the top lasted just a few seconds when he fired in a 1m42.555s 10 minutes into FP1.

Miller continued to find time on his following tour with a 1m42.263s, which stood as the benchmark for the next 15 minutes or so before the Australian bettered his own leading effort with a 1m42.063s.

This time would come under no threat through to the chequered flag, leaving Miller to end the session 0.467 seconds clear of the field. 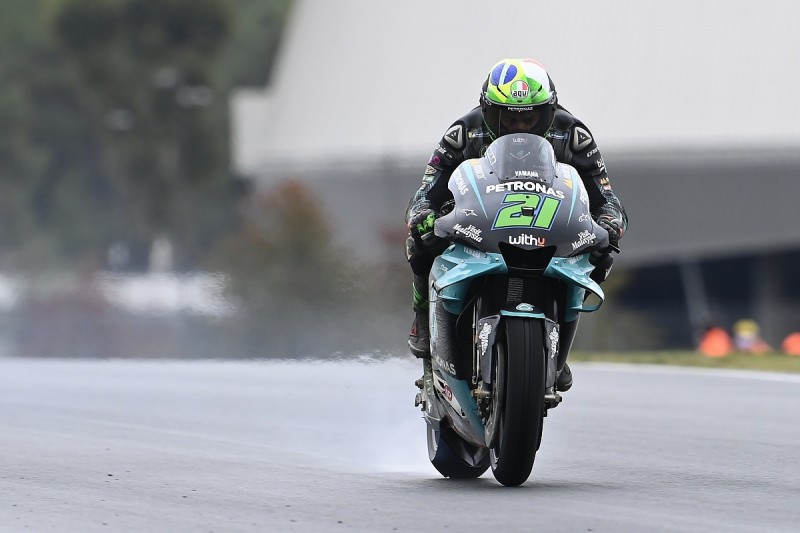 Franco Morbidelli was the leading title protagonist in second on the SRT M1, with the Teruel GP winner leading Honda's Stefan Bradl, who is once again filling in for the injured Marc Marquez as a 2020 comeback for the world champion appears unlikely now.

Johann Zarco was the second-fastest Ducati in fourth on his Avintia GP19, with Alex Marquez rounding out the top five on the sister factory Honda despite a crash at the Nieto corner in the final 10 minutes.

Despite admitting on Thursday he would have to limit his mileage due to concerns over engine life in his remaining units, Vinales still completed 19 laps - two less than the highest tally of 21 a handful of riders completed.

Alex Rins was a steady 13th on the sister Suzuki ahead of Francesco Bagnaia (Pramac), who was the first faller of the weekend at the Doohan corner at Turn 2.

World Superbike rider Gerloff's first experience of MotoGP machinery ended with him 1.5s off the pace in 16th, heading the likes of Mir, Cal Crutchlow and Quartararo.

Gerloff, the first American to start an official MotoGP session since Nicky Hayden at Phillip Island in 2016, will remain on the factory Yamaha for FP2 while Valentino Rossi awaits the results of a COVID-19 test.

Championship leader Mir and nearest rival Quartararo both struggled in MotoGP's last wet weekend at Le Mans, with the Suzuki only 17th while a visibly frustrated Quartararo ended up 2.7s off the pace in last.

Aprilia debutant Lorenzo Savadori was two tenths clear of Quartararo in 20th as he takes over from Bradley Smith for the final three rounds.

Tech3's Iker Lecuona is absent from this weekend's European GP having been forced into isolation at home when his brother and assistant tested positive for COVID-19 earlier this week.