Aleix Espargaro doesn't believe the Honda is "much better" than the new Aprilia MotoGP bike in cornering and braking, but admits the RC213V is "unbelievable" under acceleration.

Aprilia overhauled its RS-GP over the winter and enjoyed a strong pre-season testing phase, while going well once again on Wednesday during the two Jerez test sessions.

Though he finished Friday's running a somewhat disappointing 16th on the combined times - attributing his FP1 slump to a front chatter problem he's never encountered before - having ended both test sessions at Jerez in the top 10, Espargaro heaped praise on the RS-GP again.

"I was able to do two, three laps [in FP1] behind [Marc] Marquez," Espargaro said.

"And our main goal to work for the future is that pure torque, when we pick up the bike.

"The Honda is extremely strong, it is unbelievable.

"Obviously, Marc is able to carry a lot of speed [through] corner but because [of] his riding style.

"I don't think that the Honda is much better than the Aprilia in terms of cornering, in terms of stopping power.

"I feel strong on the chassis side, I'm able to follow him into the fast corner especially, but as soon as we open the throttle the Honda is very, very strong and they are able to put a lot of power into the ground and this is what we are working because especially the initial acceleration we are missing torque." 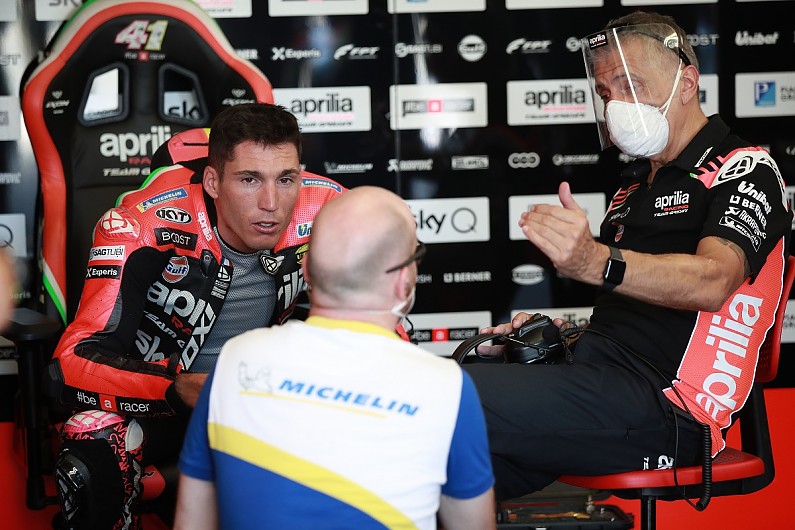 Aprilia did suffer reliability issues with its new 90-degree V4 engine in the winter, and was granted special dispensation to continue developing the unit for reliability purposes after MotoGP sealed all engines for the year back in March.

Espargaro says Aprilia has turned down the engine this weekend to try and maximise data gathering on the motor at Jerez.

"Unfortunately, everybody knows that from Sepang to here, Qatar test, Misano, we have small problems regarding the engine, due to the young [age] of the engine," he added.

"So what we want is to finish the race, to achieve points and to be strong at the end of the championship.

"So, obviously, we are a little bit relaxed on the engine, we are stressing the engine less, especially on the revs to make more and more miles into the engine, to understand where we can go.

"I'm completely sure that if we keep going like today, the engineers either this weekend or next weekend will be able to give me more revs."