Record breaking MotoGP polesitter Fabio Quartararo set the fastest-ever MotoGP lap of Jerez in the post-Spanish Grand Prix collective test at the same circuit on Monday aboard his Petronas Yamaha.

The 20-year-old rookie ended the day with a best effort of 1m36.379s, which was half a second quicker than the lap that had made him the youngest pole-sitter in MotoGP history on Saturday, eclipsing Marc Marquez's existing record.

He retired from second in the Spanish Grand Prix after becoming stuck in third gear, due to a part Yamaha will shorten the reccomended mileage on for future races.

Quartararo headed the timing screens for most of the day, having managed a series of fast laps in the third hour that included a 1m37.101s, which allowed him to take the top spot away from team-mate Franco Morbidelli.

LCR Honda's Cal Crutchlow became the first rider to dip below 1m37s during the test early in the final hour of running, taking first place from Quartararo.

But the Frenchman returned to the track afterwards and reclaimed the lap record with just under half an hour to go, following that up by going just 0.005s slower on his next lap.

Quartararo ended the day with a four-tenths cushion over Crutchlow, who was another three tenths up on Morbidelli in third place.

The Italian Morbidelli grabbed third position from KTM's Pol Espargaro by just two hundredths of a second in the final minutes of the test.

Yamaha's Maverick Vinales and Suzuki's Joan Mir were also among those improving late on as they took fifth and sixth respectively, the former recording a field-high 94 laps.

Spanish GP winner Marquez led early on in the day, and was second to Quartararo at the conclusion of his 75-lap test programme, before ultimately being shuffled down to seventh place. 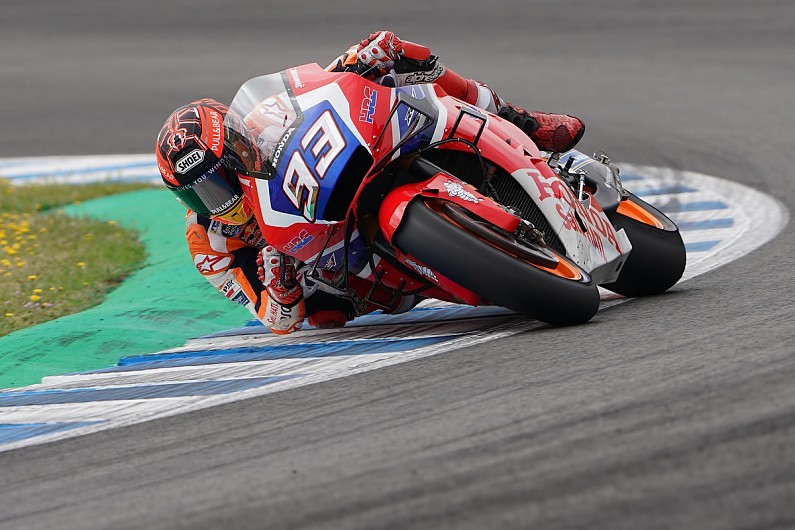 He set his best time, a 1m37.260s, on the carbon-covered red-and-blue Honda Racing Corporation-liveried bike that test rider Stefan Bradl rode during the Spanish GP weekend.

Suzuki debuted a wide Ducati-style rear winglet on the GSX-RR of Mir's team-mate Alex Rins, but the Austin race winner got little mileage with it as it broke off when he swiftly went off-track.

Rins ended the day in eighth place, as the final rider within a second of Quartararo's blistering effort.

Jorge Lorenzo was just two tenths down on team-mate Marc Marquez in ninth - after saying he was "sad, disappointed and worried" after the Spanish Grand Prix. He did crash twice during the test.

Takaaki Nakagami, who along with Lorenzo fell off his bike with the chequered flag approaching, made up the too 10.

Andrae Dovizioso headed three of his fellow Ducati riders in 11th, with the Italian manufacturer's contingent followed by the leading Aprilia of Aleix Espargaro in 15th.

Espargaro's factory teammate Andrea Iannone, who sat out the race after injuring his left ankle in a crash on Saturday, was initially declared fit to test but pulled out due to pain after a single installation lap.

Yamaha's Valentino Rossi concluded the test 17th, 1.677s off the pace and a place behind KTM rider Johann Zarco.