Danilo Petrucci led his factory Ducati team-mate Andrea Dovizioso in a second MotoGP practice session at Jerez that was red-flagged shortly before the end.

As he had done in FP1, Honda rider Marc Marquez controlled the majority of the session, with a 1m38.154s keeping him on top for most of the 45-minute running.

Marquez was the first to improve as the final fast laps started, but he only went faster by seven thousandths of a second and was soon denied by LCR Honda's Cal Crutchlow.

The Briton was then beaten by Petrucci, who set a time of 1m37.909s with just three minutes on the clock and shortly before the session a red flag was shown.

The stoppage was caused by Karel Abraham and Bradley Smith crashing at Turn 5 in quick succession, with Abraham's Avintia Ducati bike, plus plenty of debris, left on track.

MotoGP reported KTM rider Smith had been taken to the medical centre for a check-up after his crash.

The break lasted only a few minutes, leaving time for one more fast lap, but the majority of the top riders could not improve - meaning Petrucci ended up topping the session.

Dovizioso did manage to get up to second as he beat Crutchlow by 0.001 seconds, with Marquez taking fourth. 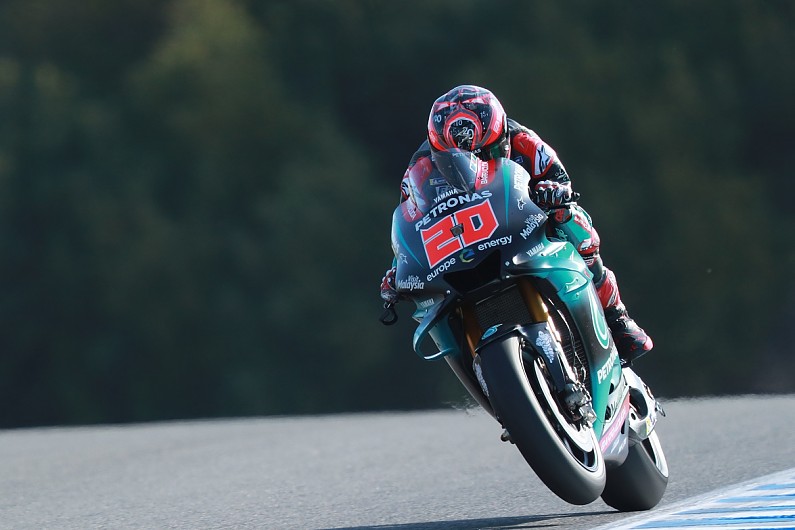 The Yamahas of Maverick Vinales and Fabio Quartararo (pictured above) improved after the red flag to secure fifth and sixth, and were followed by three more Hondas - wildcard Stefan Bradl, LCR's Takaaki Nakagami and the second factory bike of Jorge Lorenzo.

The same nine riders are currently in the top 10 of the overall classification as well, with the final Q2 spot currently occupied by Jack Miller - who was 11th in FP2, and narrowly beaten by Pramac Ducati team-mate Francesco Bagnaia.

Pol Espargaro was the top KTM in 12th as his team-mate Johann Zarco suffered his second crash of the day at Turn 2.

Tech3 rider Hafizh Syahrin also fell, and completed just three laps in the session. Joan Mir was another to crash but still ended up close to team-mate and Austin race winner Alex Rins, who was only 16th as neither Suzuki finished in the overall top 10.

After taking 16th in FP1, Valentino Rossi continued to struggle and was 14th in second practice.