Zarco ended MotoGP's first MotoGP race at Buriram fifth, less than three seconds behind winner Marc Marquez, which was his best finish since his most recent podium visit at Jerez in May.

"Really happy," said Zarco post-race. "Tough race, difficult on the body and [to cope with] the warm and the intensity of the race.

"Pretty happy I was one of them [the leaders]. If it was hard for me, it was hard also for them, and this motivated me to keep pushing.

"[There were] three Yamahas in the top five, so it doesn't mean I did something incredible, but we were competitive here and when the bike is working we are ready to be at the top level.

"I was exhausted in the last three races I finished - Austria, Misano and Aragon. Instead of fighting the others I was fighting my own bike.

"Now the conditions have been difficult, but I was not fighting the bike. I really tried to control the bike and it's totally different.

"When I was able to control the bike I could fight with the others, this was a real race."

Asked why he felt Yamaha was more competitive in Thailand that it has been in recent races, Zarco said he felt Buriram's flowing corners, which require the bike to be leant over for long periods of time, favoured the M1.

"I think sectors two, three and four have been good for the Yamaha, it's been a lot of [emphasis on the] entry of the corner and then you must go fast in the corner, keep the speed and not have strong acceleration," he said.

"Only Turns 3 and 12 - Turn 12 is maybe the worst one - but all the others are more corner-speed [orientated] than acceleration and that's why I think we have been competitive." 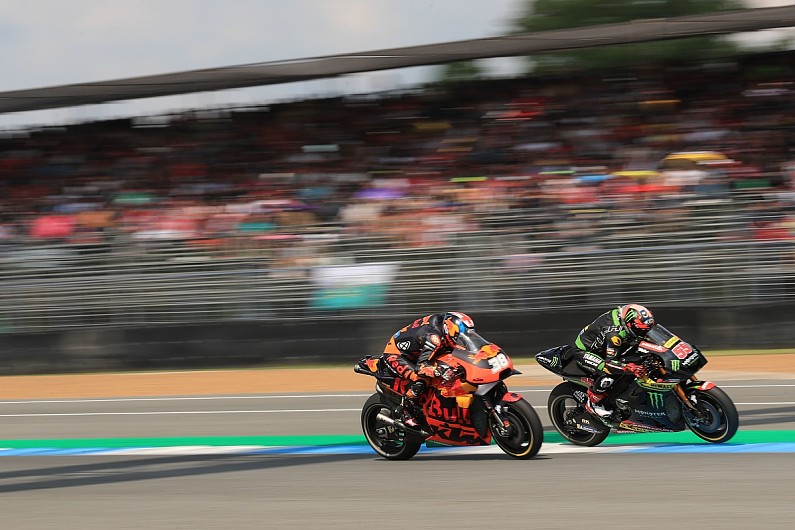 Tech3's second rider Hafizh Syahrin also enjoyed his best showing for some races at Buriram, finishing 12th to bank his first points since August's Brno round.

Team boss Herve Poncharal slammed Syahrin's riding at Misano, but said the Malaysian's performance in Thailand was one of his best of 2018.

"Hafizh had a bad start [in the race], but showed an unbelievable recovery," said Poncharal.

"He was lapping really fast, I was impressed. He decided to go hard - hard like the big boys - and made it work.

"His race was honestly one of the best of the whole year.

"It was a bit of struggle in Misano and Aragon and we didn't know what to expect, but he showed us that we shouldn't worry about the future."