Toyota continued to dominate at the halfway mark of the Le Mans 24 Hours, as the pulsating duel between its cars was split up by circumstance.

At the start of the ninth hour, Buemi retook the lead from Conway and suggested to his team that the Japanese cars back off the pace with their nearest challenger two laps adrift.

But his crew was awarded a buffer when Conway handed over to Lopez at the end of the hour and the luckless Argentinian hit a slow zone on his out lap. Hartley, who took over from Buemi, completely avoided this and thus pulled out a 27s lead that allowed him to save his tyres. In the following three hours, the gap remained relatively static at around 20s, with Hirakawa heading Kobayashi at half distance.

The #709 Glickenhaus 007 LMH of Ryan Briscoe, Richard Westbrook and Franck Mailleux continues to run in third, two laps behind the Toyotas, with its only delay caused by a brief visit to the garage due to a sensor issue.

The sister #708 crept back into the top 10 overall following Olivier Pla’s earlier shunt exiting Tetre Rouge, although it had a brief scare when it required an engine electronics recycle in the pits.

The #36 Alpine A480-Gibson is still outside the top 20 after its myriad early mechanical woes.

In LMP2, a phenomenal drive from Robin Frijns brought the penalised #31 WRT ORECA-Gibson 07 back into the frame after its first-corner misadventure by Rene Rast that fired United’s Will Owen into the gravel.

However, the #38 Jota ORECA continued its Toyota-style dominance out front, with Will Stevens, Antonio Felix da Costa and Roberto Gonzalez in command. It continues to run fourth overall. 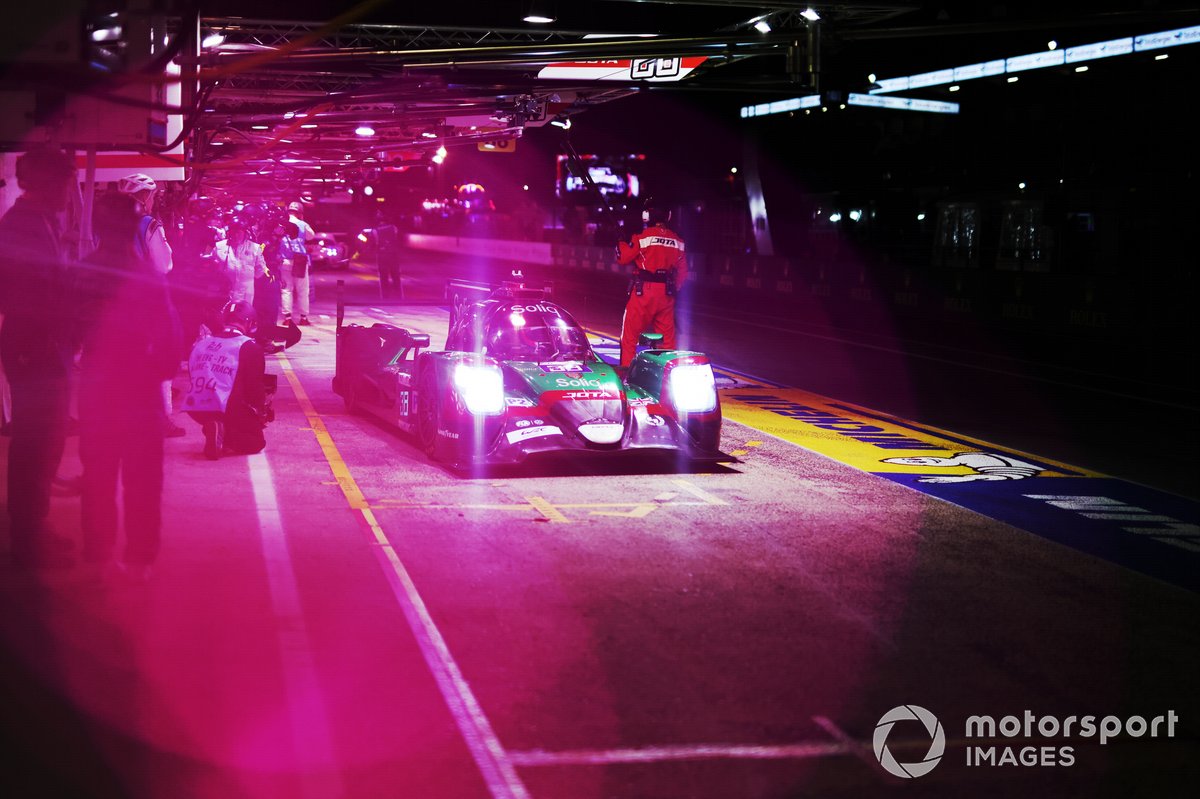 The #9 Prema Orlen ORECA of Robert Kubica, Louis Deletraz and Lorenzo Colombo is its closest consistent challenger, especially after Deletraz passed and pulled away from WRT’s Sean Gelael.

Another wild fight in the early hours was between Panis Racing’s Julien Canal and Team Penske’s Felipe Nasr for fourth, which was settled in the Brazilian's favour after a lengthy side-by-side duel.

The #92 factory Porsche 911 RSR-19 of Kevin Estre, Michael Christensen and Laurens Vanthoor continued to lead the GTE Pro class in the wake of Corvette Racing’s earlier travails. Christensen even found time to spin at Mulsanne Corner, and the car holds a healthy lead over its #91 sister car.

Alexander Sims drove a blinder in the recovering #64 Corvette C8.R he shares with Nick Tandy and Tommy Milner after its earlier brake issues – although he was one of several drivers penalised 5s for going too quickly in a slow zone.

The #51 AF Corse Ferrari 488s of Alessandro Pier Guidi, James Calado and Daniel Serra remains in touch with the frontrunners too.

In GTE Am, #79 WeatherTech Racing Porsche 911 of Cooper MacNeil, Julian Andlauer and Thomas Merrill was toppled from its longtime lead just before the halfway mark when MacNeil lost over a minute on his car's 170th lap.

That allowed the #33 TF Sport Aston of Ben Keating, Henrique Chaves and Marco Sorensen to hit the front for the first time in the race, with the #99 Hardpoint Porsche of Andrew Haryanto, Alessio Picariello and Martin Rump and #98 Northwest Aston Martin Vantage of Paul Dalla Lana, Nicki Thiim and David Pittard also within 90 seconds of the leader at the 12-hour mark.

Actor Michael Fassbender's difficult Le Mans debut went from bad to worse when the Irishman's Proton Porsche, repaired after a hit from Vincent Abril at Indianapolis sent him into the tyres, spun into the gravel at the Dunlop Chicane.