Toyota suffered technical dramas just before two-thirds distance at the Le Mans 24 Hours, with a brief stoppage for Jose Maria Lopez promoting the #8 car of Brendon Hartley into the lead.

Lopez was holding a comfortable lead of 15 seconds when his Toyota GR010 crawled to a halt at Arnage, with Hartley passing him for the lead by the time the Argentine was able to perform a reset and get going again.

The #7 Toyota lost further time when Lopez brought the car into the pits at the end of the lap, leaving him more than a lap behind the sister car with eight hours remaining in the race.

The #7 car had moved into the lead in the 14th hour when Kamui Kobayashi pitted under two separate slow zones to hand over the car to Mike Conway, who later passed on the driving duties to Lopez.

Ryo Hirakawa in the #8 Toyota pitted a lap after Kobayashi but by that time one of the two slow zones - deployed to clear the stranded #59 Inception Ferrari 488 GTE Am car of Alexander West - was cleared, playing its part in Conway getting the jump on Sebastien Buemi, who then took the wheel of the #8 Toyota.

The leading Glickenhaus continues to run in third place with Richard Westbrook driving the Pipo-engined #708 LMH, albeit four laps down on the two Toyotas after losing time in the pits for a change of rear wing.

The sister #709 Glickenhaus of Olivier Pla is circulating nine laps behind, while the Alpine A480-Gibson sits 17th overall and last among the hypercar entrants after being hit with a series of reliability issues early in the race. 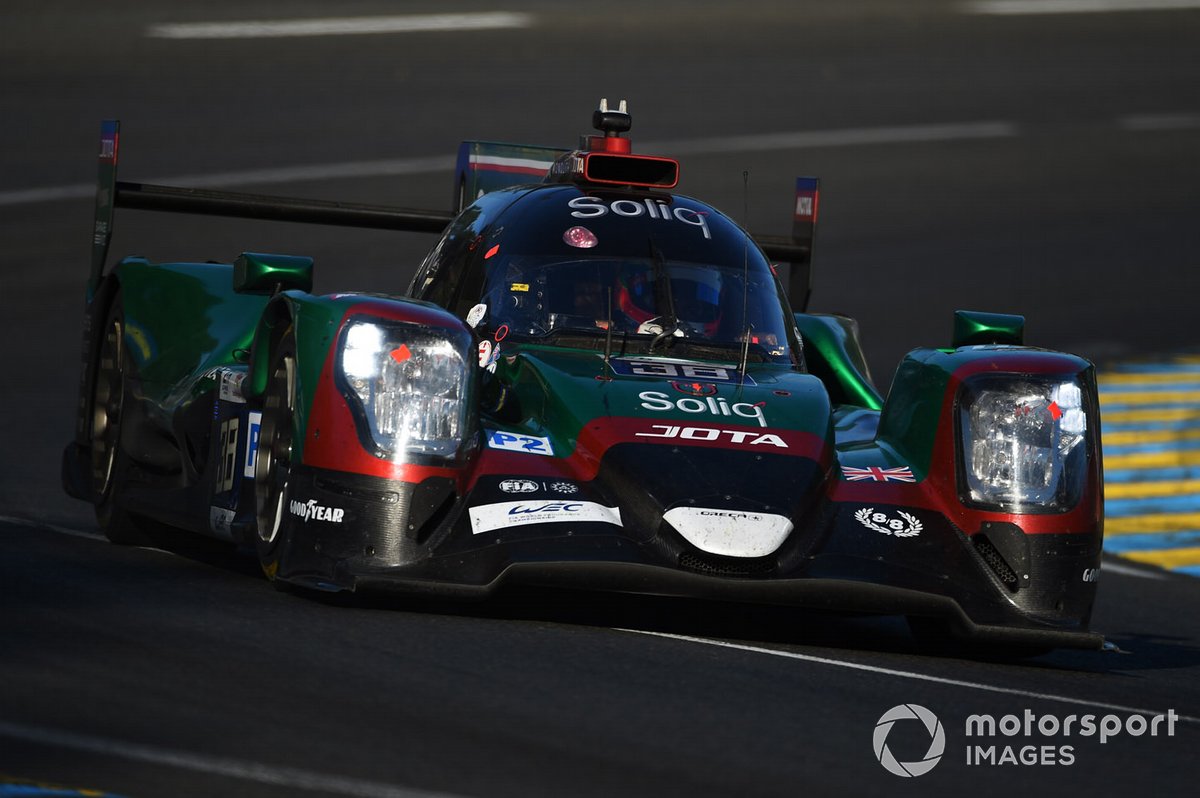 JOTA remains in front in LMP2

The #38 JOTA crew continues to dominate the LMP2 class after gentleman driver Roberto Gonzalez took over the driving duties from Antonio Felix da Costa in the 14th hour, having spent just a little over two hours behind the wheel prior to that stint.

The Mexican inherited a lead of three minutes and was more or less able to maintain that advantage, even as most of JOTA’s rivals ran professional drivers in the early hours of the morning, before handing over the car to Will Stevens just before the end of the 17th hour.

Second place in the LMP2 class is held by Robert Kubica in the Prema, with a drive through penalty for Sean Gelael in the #31 WRT for hitting the 10 Vector Sport promoting Edward Jones in the #28 JOTA in podium positions.

There was a lengthy slow zone period in the 14th hour to repair the barriers at Porsche Curves following a major crash for Ultimate driver Jean-Baptiste Lahaye, who was able to return to the pits despite sustaining heavy damage to his #35 ORECA.

Disaster for Porsche, Corvette in the lead

Corvette circled back into the GTE Pro lead when Michael Christensen suffered a massive front-right tyre blow out heading into the Mulsanne Corner, tearing off the entire front bumper off his #92 Porsche.

Christensen was able to get the car back into the pits after an excruciatingly slow lap, where Porsche was able to replace the bodywork and send his team-mate Laurens Vanthoor back out on track again.

With the Porsche dropping several laps off the lead, Alexander Sims is now at the head of the field in the #64 Corvette, with Daniel Serra running 18s behind in second in the #51 Ferrari.

TF Sport remains in front in GTE Am, with Ben Keating at the wheel of the #33 Aston Martin Vantage GTE following a close battle with the #99 Hardpoint Porsche of Andrew Haryanto.