Toyota led at the eight-hour mark of the Le Mans 24 Hours, its cars swapping the lead on multiple occasions, while Corvette's hopes of victory in GTE Pro were dented.

The #7 car took the lead from #8 when Kobayashi undercut Hirakawa in the sixth hour during the round of pitstops after their opening stints. Kobayashi then had two wild moments at dusk, at the Ford chicane and the newly renamed Daytona chicane on the Mulsanne Straight, as he extended a 7s lead.

Their positions were then reversed as the #7 car lost time with a slow tyre stop and got stuck behind a GT car as it rejoined in Conway’s hands, so Buemi took up the lead in #8.

The lead then switched again on the Mulsanne Straight, a charging Conway regaining the top spot just before the conclusion of the seventh hour.

Glickenhaus gave distant chase, with the #708 leading #709 until Olivier Pla spun the former at Tertre Rouge on an outlap – reversing their positions. Pla crabbed the #708 back to the pits for repairs to its left-rear suspension and it dropped outside the top 15 overall.

The other Hypercar, the #36 Alpine A480-Gibson, also suffered a dreadful time. Following the clutch fix in the fourth hour, a lengthy second stop ensued an hour later, with the team having to remove the exhaust banks as they switched the ignition coil.

Team boss Philippe Sinault explained: “The first [problem] was the clutch, the electronic box for the clutch, and the second was the coil for the engine, which we had to change. In total we lost 23 minutes… it’s like a nightmare.”

Alpine’s Andre Negrao rejoined seven laps down, and then suffered a wild trip through the gravel at the Porsche Curves but continued. 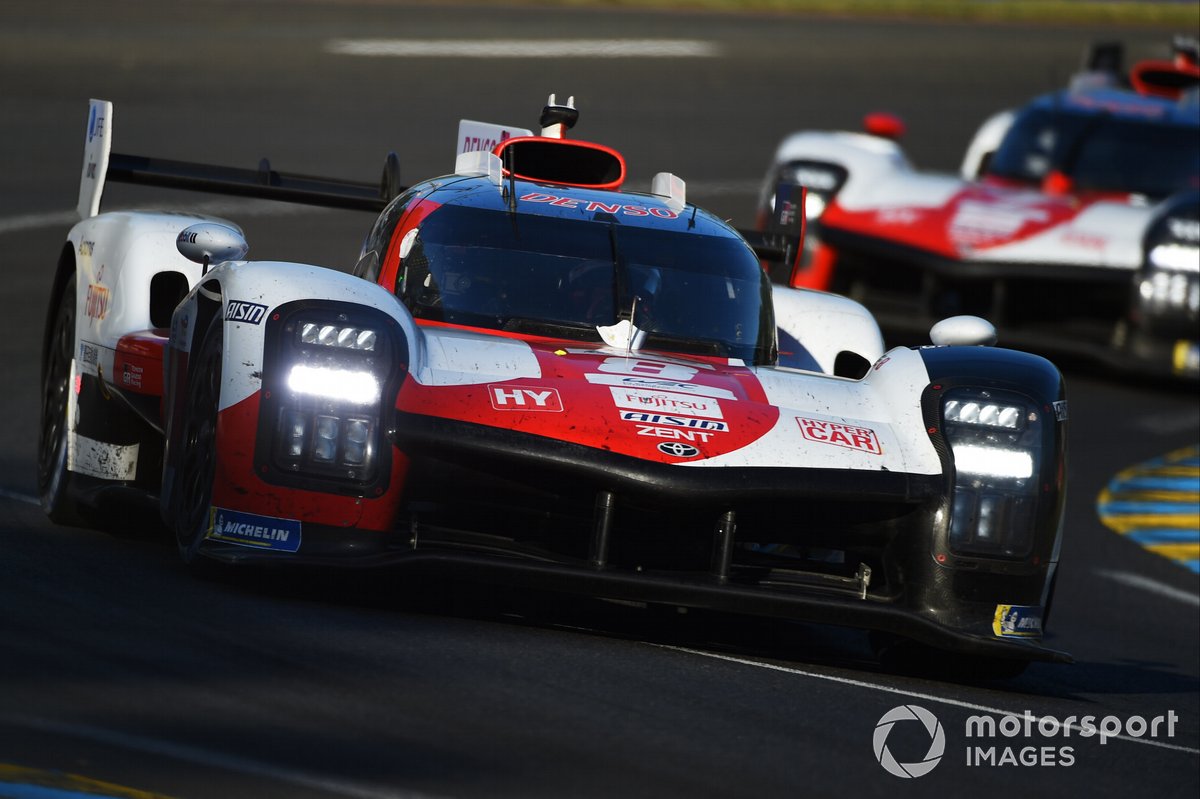 In LMP2, the #38 Jota ORECA-Gibson 07 continued to stretch its legs at the head of the field as Roberto Gonzalez continued the good work of team-mates Will Stevens and Antonio Felix da Costa. It runs fourth overall due to the problems for Alpine and the #708 Glickenhaus.

The chasing Team Penske #5 ORECA driven by Felipe Nasr, Dane Cameron and Emmanuel Collard suffered an unscheduled stop for attention to its brake ducts and a new nose section after a front-left tyre delaminated and damaged parts around it in the sixth hour.

The #9 Prema Orlen ORECA of Robert Kubica, Louis Deletraz and Lorenzo Colombo remains firmly in the hunt. But another early front runner, the #1 Richard Mille Racing ORECA, suffered a setback in the fifth hour due to WRC legend Sebastien Ogier earning a one-minute stop/go penalty for an unsafe pit entry penalty and forcing a car off track.

Corvette’s grip on the GTE Pro class disintegrated in this spell of the race, firstly when Nick Tandy suffered a brake pressure issue in the #64 Corvette C8.R that resulted in an unscheduled stop.

But the bigger blow came when the leading #63 suffered a left-rear suspension failure on the Mulsanne when 17s clear. Antonio Garcia had to drive back painfully slowly, and the car required lengthy repairs.

Rivals Porsche endured a less severe hit earlier when Frederic Makowiecki received a drive-through penalty in the #91 911 RSR-19 for abuse of track limits. But its untroubled #92 car of Kevin Estre, Michael Christensen and Laurens Vanthoor now holds a sizeable lead over the delayed #91.

There was also drama at Ferrari as its leading #52 AF Corse 488 suffered a front right puncture in Miguel Molina’s hands. That has elevated the #51 sister car of Alessandro Pier Guidi, James Calado and Daniel Serra - which has also served a penalty for track limits - up to third in class behind the Porsches and ahead of the #64 Corvette.