Darren Turner has had countless team-mates during his long spell as an Aston Martin factory driver. But the three-time Le Mans 24 Hours class-winner picks out Stefan Mucke, after a five-year stint together that built a life-time friendship, as his favourite team-mate in Autosport's ongoing series

In his 17-year stint as an Aston Martin factory driver, Darren Turner has by his own admission “been really lucky with team-mates” that have helped him to secure three class victories at Le Mans and a glittering array of honours across multiple championships.

The British GT Championship’s GT4 Pro-Am division title was added to that tally last year, while his success extends beyond sportscar racing too, for Turner was a three-time race winner in the British Touring Car Championship with SEAT alongside Jason Plato in 2007.

But, says Turner, his choice of Stefan Mucke as his favourite team-mate is determined not just by “the bit that’s in the garage – there’s so much more to it”.

“I’ve been very privileged to have enjoyed sharing cars with guys that are brilliant in the car and as much fun as you can want really out of the car,” he explains. “We travel a lot and that’s something that’s not always recognised when the question is asked about your team-mate.”

Mucke was Turner’s regular co-driver between 2011 and 2015, racing primarily in the GT1 World Championship and the World Endurance Championship while also taking in events in the American Le Mans Series/IMSA, Blancpain GT Series and Nurburgring 24 Hours. Turner says the two were “nearly always on the same page” and had a “similar passion about old cars, how things work and optimisation”.

“His logic was the same as my logic, which isn’t always the same with lots of drivers,” explains Turner, who is continuing in British GT's GT4 class with Newbridge Motorsport this year. “Everyone thinks differently about finding a solution or something.” 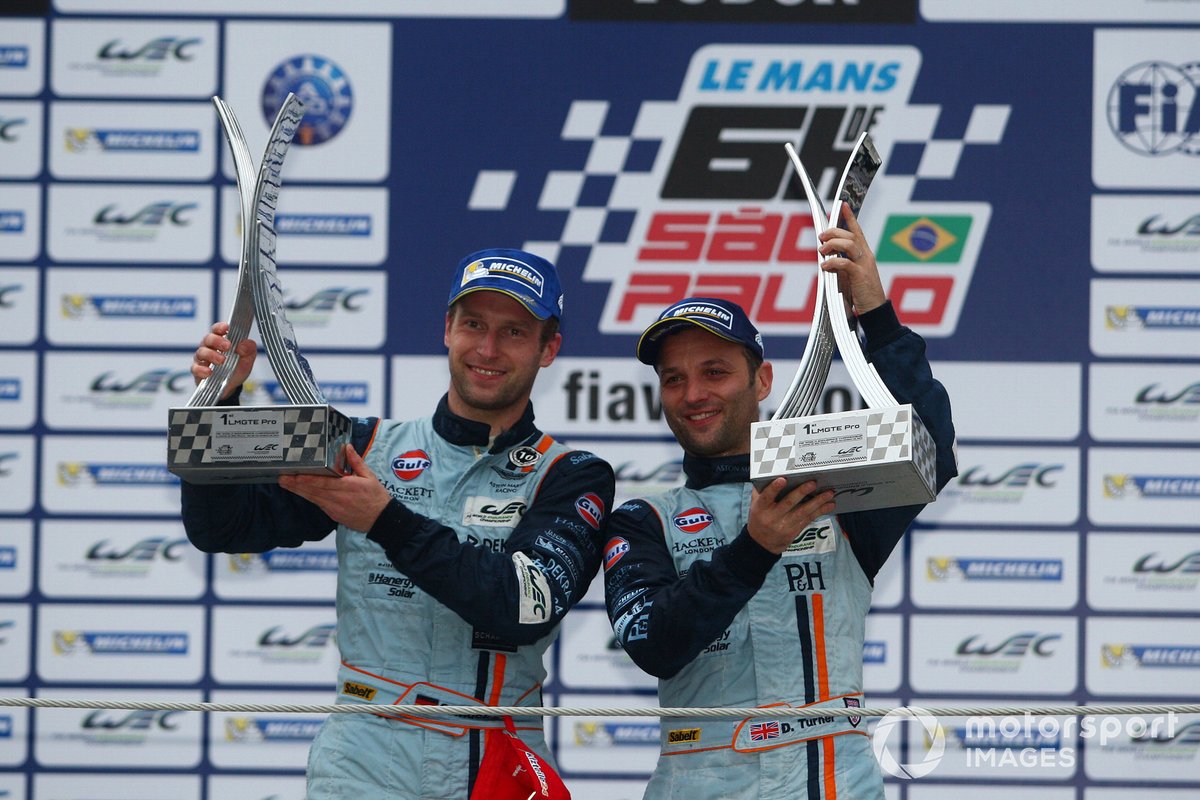 Turner and Mucke enjoyed plenty of success together as Aston Martin team-mates, including winning the GTE Pro class at Sao Paolo in 2014

Turner says they were also “very similar when you looked at the overlays” in terms of braking and the steering inputs, which resulted in them having similar feedback on the car balance. That proved crucial in helping them to six GTE Pro class wins in the WEC between 2012 and 2014, in addition to outright victories in the GT1 World Championship (Beijing Goldenport, 2011) and Blancpain (Silverstone, 2013).

“We also had a very similar sort of feel for what the car balance should be,” he says of Mucke, who recently raced a 1995-spec Opel Calibra DTM car at the Lausitzring in the DTM Classic series. “That really helps when you sit down and you have trust that the other driver is giving feedback which is beneficial to you as well. You don’t even have to be there when he’s having that conversation, because you know it’s going in the right direction from your own experience.”

The social element of travelling around “and the fun we used to get up to on the way to circuits, at circuits, back at the hotels” made their working relationship thrive.

“He’s the clumsiest guy you’re ever going to meet,” laughs Turner. “It was drinks, nearly always. You’d go to the Starbucks drive-through, get back to the car and already he’s got it all over himself. That was pretty much a daily thing for him.

“But it was an all-round package of two people that come from different worlds but just had the same sort of love for the sport and enjoyment of going racing for all the right reasons.”

Turner says he “would lean on [Mucke] more” when they were stablemates in prototypes driving the Lola Aston Martin DBR1-2 and ill-fated AMR One, as the German had more experience in that era, “and occasionally he’d lean on me more in the GT stuff”. The pair were an effective unit and had complete trust in one another.

Despite Mucke’s tendency for the odd “clumsy moment” – like clattering Richard Westbrook on Silverstone’s Hangar Straight in 2011, while gesticulating at the Briton for turning him around at the previous corner, and crashing out in qualifying for the San Luis FIA GT1 title decider which put them out of both races and championship contention – Turner says he “had his back because I knew he had my back”. 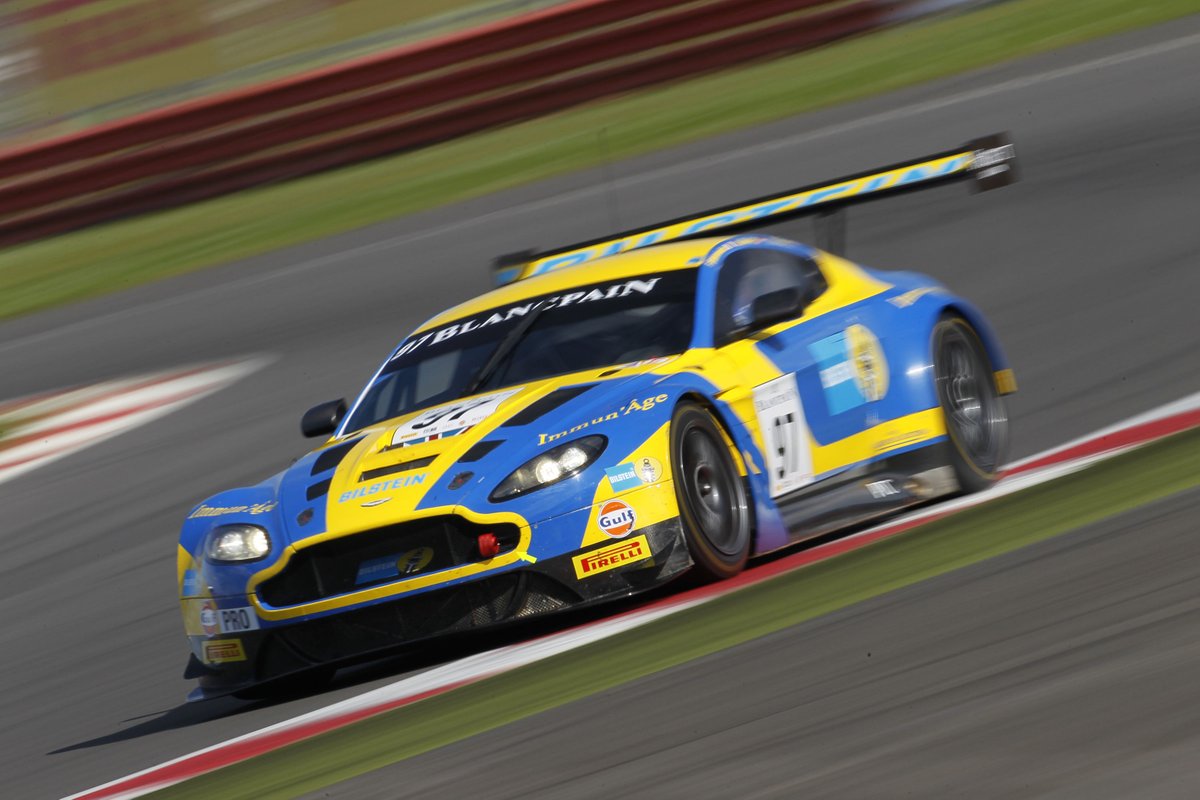 “We all make mistakes and having someone that is there on your bad day is what makes a really good team-mate and that’s the trust that me and Stefan had,” he says.

“The result on Sunday is reflected on how you work together throughout the weekend. Compromising your own laps to give your team-mate more track time or another new set of tyres is key to a good working relationship in sportscar racing and we both did that on various occasions for each other.

“Thinking about the last lap on Sunday, the bigger picture and not about the lap right at this second, is something you only get when you have full trust in your team-mate. You’re happy to let them be the superstar if that is the case that weekend and vice versa. Your egos go out and you work together as a collective.”

They became rivals when Mucke left for Ford in 2016, the programme headed up by ex-AMR technical guru George Howard-Chappell. Turner says they “spoke a lot about it at the time” so understood his reasons - “I was just happy he’d found something that was at a high level” - but enjoyed racing against him.

“Competing against a friend on a race track is actually quite fun because I sometimes think you just give a little bit more because you want to have that last word at the hotel bar on Sunday night. I don’t think we were on the track that often, but when we were on track together you could run mirror-to-mirror and it wasn’t a drama. You can race really hard and still have that level of respect that makes it even more fun.”

Turner even stayed for two nights with Mucke’s family when a change in Germany’s COVID travel rules while he was at the Nurburgring for a test threatened to leave him unable to return for a race the following week.

“I was made to feel so welcome during that period, it reminded me of why we had a special relationship,” he says. “We got up to as much mischief as you can in 48 hours! We’ve got a friendship that will last us into our old age way past when we retire from driving.” 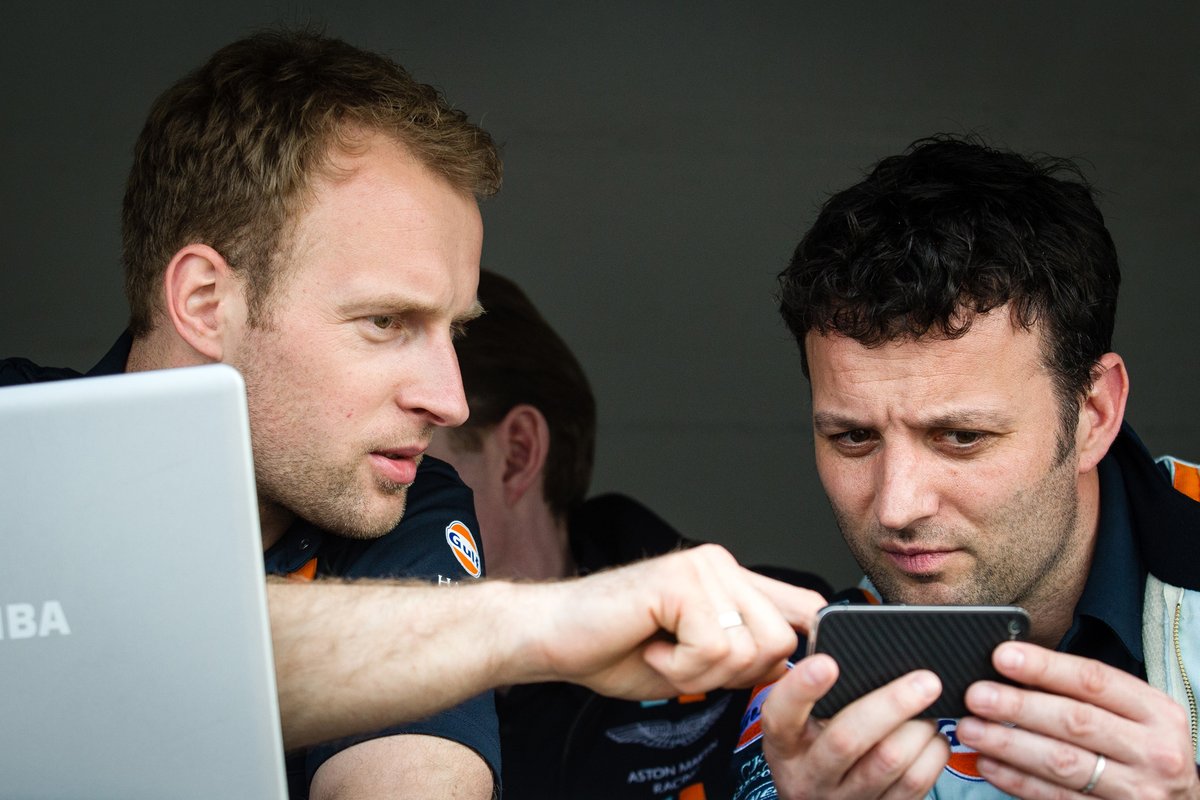