Newgarden began the race from the front row but dropped behind rookie sensation Felix Rosenqvist into third at the start.

The critical moment came around half-distance, where Newgarden stayed out longer than team-mate and race leader Will Power and Chip Ganassi Racing driver Rosenqvist during the second pitstop phase.

Whereas the rest of the frontrunners stopped for the harder black-sidewalled tyres, Newgarden opted for the softer compound for that stint and emerged in a lead that he was able to build.

Ganassi's Dixon also jumped both Power and Rosenqvist during those stops, and pressured Newgarden in the final stint when both were on the harder tyres.

As Newgarden struggled to get past backmarker Marco Andretti, Dixon closed what had been a seven-second gap down to just under two.

But Newgarden resisted, eventually winning by just under three seconds.

Polesitter Power rounded off the podium, ahead of Rosenqvist - who led early on after passing Power on the first restart, which followed a caution period for Andretti Autosport's Ryan Hunter-Reay's day coming to a premature end due to an engine issue. 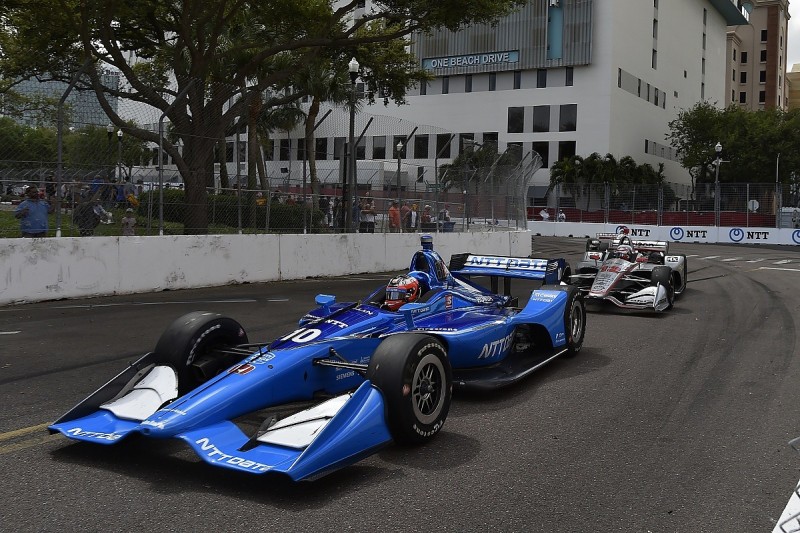 Rosenqvist lost the lead to Power at the first stops, and then fell to fourth when he next pitted.

The only other caution period was due to a collision involving Ed Carpenter Racing with Scuderia Corsa's Ed Jones and AJ Foyt Enterprises' Matheus Leist.

Jones clipped the inside of Turn 9, sending him into the barriers, and Leist had some oversteer while trying to avoid it and clipped his wheel against Jones's car. Both were out on the spot.

Rookies Colton Herta and Santino Ferrucci both had strong results, finishing eighth and ninth respectively after their respective qualifying woes.

Spencer Pigot - another driver to experiment with the softer tyres through the race - finished 11th, ahead of Graham Rahal, who opted for a four-stop strategy.