The Penske duo left it late into the six-minute final segment to take the top times away from Chip Ganassi Racing duo Felix Rosenqvist and Scott Dixon.

Power's time of 1m00.4594s was just under a tenth of a second quicker than Newgarden's best effort.

Debutant Rosenqvist beat his five-time champion team-mate Dixon at the first time of asking, as the latter had changes frantically made to his car to combat an ill-handling Dallara-Honda - demonstrated by a spin in the first section of qualifying.

Behind the Penske and Ganassi drivers were Andretti Autosport team-mates Ryan Hunter-Reay, who was fastest in final practice, and Alexander Rossi. Both only did one run in the final part of qualifying.

Colton Herta was among the absolute fastest throughout the session but was penalised for blocking Carlin's Charlie Kimball in the closing stages of the second phase of qualifying - dropping him out of pole position contention.

Harding Steinbrenner Racing driver Herta is now set to start 11th, while Kimball, who was also quick in the first part of qualifying, will start three places ahead.

Rahal Letterman Lanigan's Takuma Sato had appeared to progress past the first round of qualifying but lost his fastest lap due to a new rule stating that causing a local yellow flag results in the loss of the fastest lap.

Dixon, who benefited from Sato's penalty, had spun and also caused a yellow flag, but he did not lose his time because the rest of the field were on out laps at the time.

Jack Harvey was the fastest of the Schmidt Peterson-backed cars in seventh, ahead of Kimball, second Schmidt runner James Hinchcliffe and Graham Rahal. 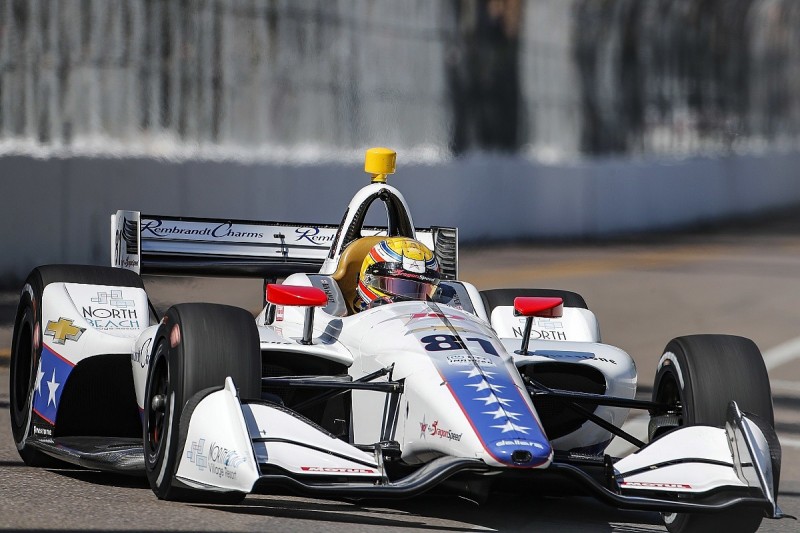 Ben Hanley and DragonSpeed made the top 12 at the first time of asking, albeit in somewhat fortuitous circumstances rather than via outright pace.

The rookie was in the first group of qualifying, which had two red flags in the 10-minute segment - one for Marco Andretti stopping at the pit entry, and another for Dale Coyne Racing's Santino Ferrucci crashing at Turn 13.

Debutant Marcus Ericsson will start the race 17th, while Ferrucci and Andretti will start near the back as the new rule states that causing a red flag results in the offending driver's two fastest laps being annulled.

Carlin explains its Indianapolis 500 tie-up with Alonso and McLaren