Hunter-Reay set his time late on in the session with a best lap of 41.0456 seconds (219.268mph), after a caution came out because of a crash from Ed Carpenter.

Carpenter had just improved his time to get inside the top 10 in seventh place, when he lost the back end of his car exiting Turn 3 and slammed into the barrier. 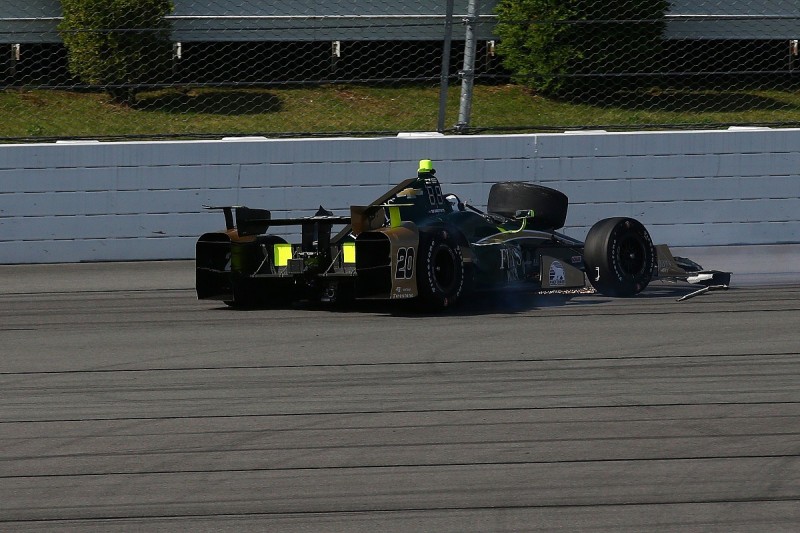 An extra seven minutes was added on to session, but it was not long before the next stoppage came just a few minutes later when Ed Jones spun on the exit of Turn 1.

From there the session restarted with just under five minutes left, allowing for Pagenaud to improve to second for Penske on a 41.0563s (219.211mph). Ganassi's Tony Kanaan also made a late move to finish third quickest.

Marco Andretti led most of the session before the stoppages, ending up fourth fastest. Scott Dixon who rounded out the top five.

Takuma Sato was also among those to improve in the dying moments of the session, reaching sixth fastest from 14th.

Alexander Rossi was seventh ahead of Graham Rahal and Helio Castroneves, with Gabby Chaves rounding out the top 10 at the start of only the third event for the new Harding Racing team.

Sebastian Saavedra, taking over from Mikhail Aleshin at Schmidt Peterson Motorsports for the rest of the season, was just ahead of Newgarden in 19th.