Reigning champion Pagenaud had taken the lead of the race by just nosing out of the pitlane ahead of points leader Newgarden by a minimal margin under yellow.

Pagenaud retained the lead at the subsequent restart but was under pressure from Newgarden and regularly defending down the inside line on the start/finish straight towards Turn 1.

Rather than trying an outside pass, Newgarden stayed in Pagenaud's tow starting lap 218 of the 248, and when his team-mate moved slightly left to take a less compromised line into Turn 1 Newgarden slotted into the gap left on the inside,

The team-mates banged wheels as Newgarden ran over the white line and inside kerb, sending Pagenaud out wide and down to third behind Ganassi's Scott Dixon.

"Unfortunate you have to get on like that with your team-mate at the end," said Pagenaud.

"It was way too close to be quoted a fair pass."

Asked if he would speak to Newgarden about it, Pagenaud said: "I have nothing nice to say. It was more of a NASCAR move."

Newgarden argued he had space to try the move.

"Simon gave me a lane to work with," he said.

"I had a good tow on him, put my car inside in the opening, got about halfway alongside of him.

"One thing I didn't want to do was touch him too hard.

"I tried to get Simon to move over a little when we were coming to the opening of the corner. We both had to slow up.

"Fortunately it worked out well for us.

"Pagenaud didn't get up into the wall or anything like that, so I would say it worked out OK for him too." 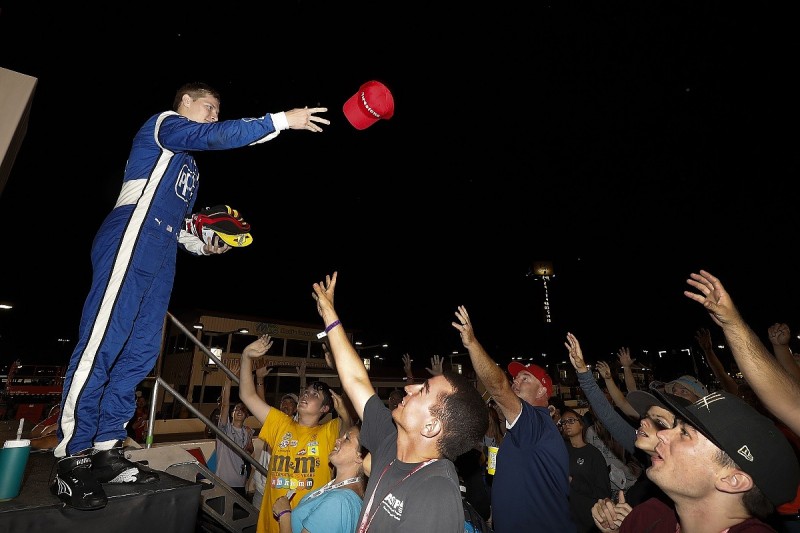 When told of Newgarden's argument there had been space to pass, Pagenaud said to NBC: "There was room from me. Anyone else and he would have been in the fence right now."

Asked whether he was surprised that a team-mate would make such a move, Pagenaud replied: "Absolutely, yes, especially with the #9 [Dixon] behind — which he is fighting for the championship.

"I would not have put a pass on a team-mate like that, for sure."

Newgarden's fourth win of his first season at Penske pulled him 31 points clear of Dixon at the head of the championship, with Pagenaud a further 12 back in fourth.