Starting second, Newgarden swept round the outside of fellow Penske man Will Power at Turn 1 but didn't have the chance to extend his lead as Power hit the wall and brought out the caution.

Power lost the back of the car going through Turn 2 and was lucky not to be injured as Ed Carpenter also spun and went over Power's Dallara-Chevrolet. 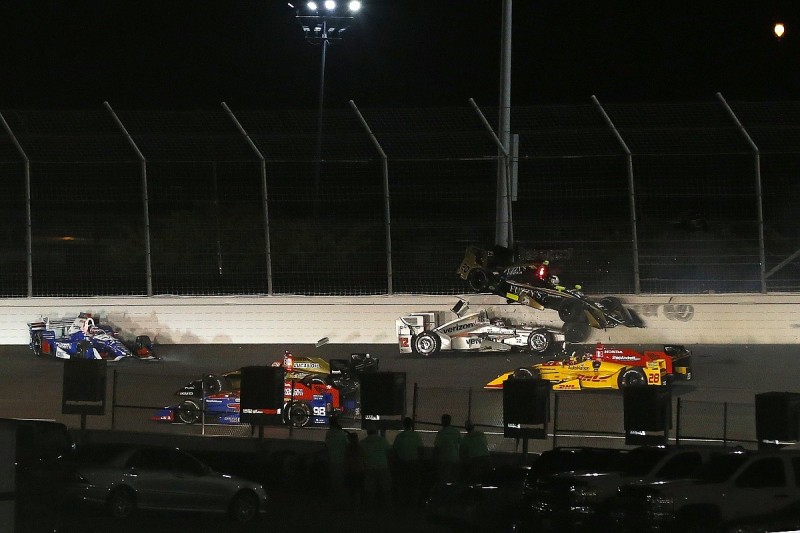 From the restart Newgarden held off the challenge of team-mates Helio Castroneves and Pagenaud until lap 103 of 248 when a slow pitstop allowed Castroneves to claim the lead.

Castroneves, who won Gateway's last IndyCar race in 2003, opened up a four second gap but an an issue with his engine cutting out at the final stop allowed Pagenaud to take the lead with Newgarden coming through for second.

In the closing laps, Newgarden squeezed his way up the inside of Pagenaud on the run into Turn 1 to reclaim a lead he held onto until the chequered flag for his first oval win of 2017.

The Penske team-mates made contact as Newgarden came through, sending Pagenaud wide and allowing Ganassi's Scott Dixon - who started the race seventh - into second.

Dixon was the lone Honda-powered entry in a top five otherwise dominated by Chevrolets.

Third went to Pagenaud, just ahead of Castroneves who had his hands full with a hard-charging Conor Daly - showing a great turn of speed in the AJ Foyt car.

Alexander Rossi was the strongest Andretti Autosport driver in sixth, with Charlie Kimball unable to move up from a seventh place he claimed on the final restart with 36 laps to go.

Behind James Hinchcliffe and Carlos Munoz, Sebastien Bourdais claimed 10th on his comeback race just three months after being injured in a massive Indianapolis 500 qualifying crash.