Having started 14th, Dixon climbed to 11th. Under the second caution of the day he and most of his rivals pitted, but an air-jack failure dropped him to the back of the field.

Then, after Graham Rahal knocked Pato O’Ward into Will Power, bringing both the Rahal Letterman Lanigan and Arrow McLaren SP cars to a halt at Turns 7 and 6 respectively, it naturally caused congestion and abrupt slowing in the area, causing Dalton Kellett to ram into Dixon’s car.

The six-time champion limped to the pits with a deflated rear tyre, with bent suspension and significant under-floor damage.

He was sent out to ensure he didn’t lose a lap and on return the crew tore some of the floor away, which cost him around 400lbs of downforce according to his race engineer Chris Simmons. Then the team dialled out four turns of front wing to help compensate and ‘re-balance’ the car.

“The car was bent and broken,” said Dixon, “but for us I think strategy-wise to take no tyres on that last stop [Lap 50] was probably the key.

"We were able to jump [three cars] and have enough fuel to get to the end, but it was very difficult to drive.

“The car just had no grip. Each time we had a restart, I was just praying for another accident! Some of those came, some of them didn't.

"Another lap with [Scott] McLaughlin [runner-up for Penske], it would have been extremely tough to hold him off. He was just super fast, and I think just in a better situation.” 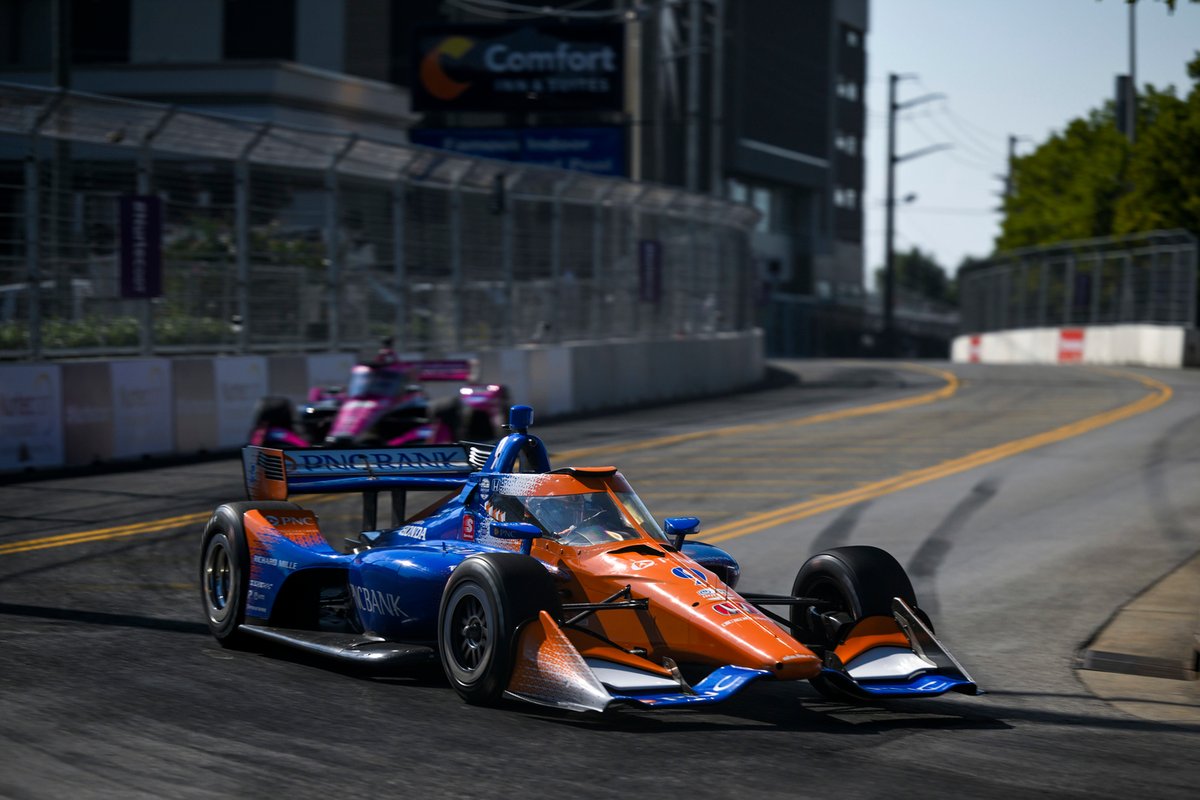 Despite 42-lap-old tires and missing downforce, Dixon clung on following a red flag to beat his New Zealand compatriot by 0.1067s, scoring a record 53rd victory in far less straightforward fashion than his Mario Andretti-equalling 52nd on the streets of Toronto last month.

Dixon said that being dumped at the back with a wounded car, he found no solace from thoughts of teammate Marcus Ericsson winning the Nashville race in similar fashion a year earlier.

“No, at the time you're like, ‘Oh, our day is ruined, our day is ruined.’ I think you're OK when the car is not damaged, but our car was pretty damaged. Like the steering wasn't straight, the rear left suspension was bent, the underfloor was pulled off, the strake we had to rip off as well, which is hundreds of pounds of downforce…

“Those situations you know that the day is going to be long, and ultimately, when it comes down to the fight, you're really not going to have a lot of speed…”

The victory moves the six-time champion up to second in the points race, just six behind Power, six ahead of Ericsson, 16 ahead of Newgarden and 27 ahead of defending champion Alex Palou, with three rounds to go. Dixon said he came into the weekend convinced that he was still in the title hunt.

“For sure; you're in it until you're not,” he said, and on learning that the points spread across the top five was only 33 points, he remarked: “There you go. Anything is possible.”

He paid compliment to longtime rival Power, commenting: “I think Will has done a phenomenal job this year. He has been much more mellow than normal, which is strange to see but good to see. It's cool.

“He is doing an amazing job. He is going to be extremely tough to beat. Team Penske, they're the benchmark as always and ones that you strive to beat every weekend.”