Marco Andretti and Alexander Rossi will swap places in Andretti Autosport's IndyCar line-up for 2018, with Andretti moving to the Bryan Herta Autosport-entered car

The partnership between the two teams has been extended for a third year, and Andretti will switch to the #98 Andretti Herta entry while Rossi moves the other way into the #27 Andretti Autosport entry.

CART and IndyCar race winner Bryan Herta's team merged with Michael Andretti's ahead of the 2016 season, and their joint entry was victorious in that year's Indianapolis 500 with Rossi.

The partnership was extended for 2017, with Rossi remaining the driver but Herta himself becoming strategist for Marco Andretti's #27 car.

Andretti has not finished on the podium in the past two seasons and was 12th in last year's standings, while Rossi ended up the best of the Andretti team entrants in seventh in the championship.

"I'm very much looking forward to being in the Andretti-Herta entry," said Andretti.

"My goal is to bring the #98 another Indy 500 win along with many other victories.

"Working with Bryan has been refreshing - he is very committed to getting me all the tools I need to get back into victory circle.

"He believes in my talent and is dedicated to turning that into results." 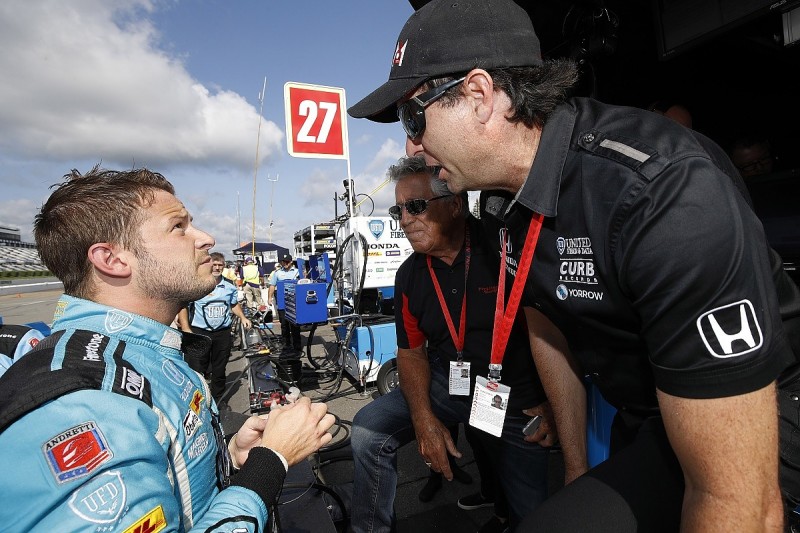 The now-30-year-old Andretti has had a mixed IndyCar career.

Though he came close to winning the Indy 500 in 2006 as a 19-year-old in only his fourth IndyCar start, he has managed just two race victories in his 12 full seasons in the series.

Herta added: "I'm thrilled to be continuing the partnership with Andretti Autosport.

"The relationship has worked really well both on and off the track for us and our partners.

"I'm looking forward to moving back onto the #98 timing stand with Marco and can't wait to get the 2018 season started."

The swap between Rossi and Andretti is the second off-season change to the Andretti organisation's 2018 line-up, as it has also replaced its most recent Indy 500 winner - the Rahal Letterman Lanigan-bound Takuma Sato - with Indy Lights graduate Zach Veach.