Newgarden's best time of 1m17.8156 seconds was the fastest time of the session in his only practice of the day, having missed the earlier running.

Dixon had also been second fastest in the first practice that was topped by Andretti's Ryan Hunter-Reay, trailing by a sizeable margin of 0.2526s, as Hunter-Reay set the fastest lap of the day in 1m17.5472s.

The four-time champion's main title threat Alexander Rossi was only sixth fastest in the afternoon after eighth in the morning after a spin.

Title outside and Penske man Will Power was third and fourth in the day's running.

Both Power and his team-mate Newgarden must win the finale, lead the most laps and Dixon to finish below 22nd and Rossi outside the top nine to secure an unlikely title.

IndyCar debutant Patricio O'Ward was a surprise third in the afternoon session, having tested at Sonoma with his Harding Racing team prior to the weekend. 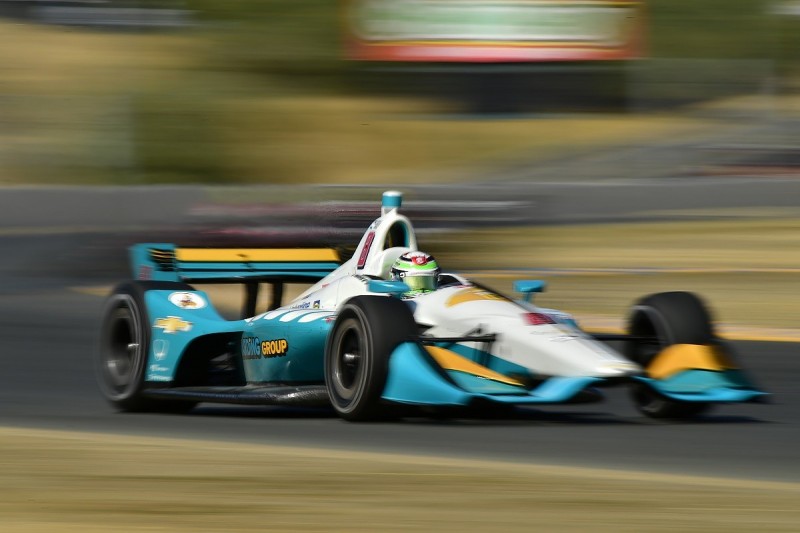 The Indy Lights champion's title rival Colton Herta was 16th and 21st in the two sessions.

Penske's Simon Pagenaud slumped from fourth to 17th from the first practice to the second as his difficult season continues.

Dale Coyne Racing with Vasser-Sullivan's Sebastien Bourdais was outpaced by DCR rookies Pietro Fittipaldi (ninth) and Santino Ferrucci (eighth) in the afternoon and finished the day 18th in second practice.

Schmidt Peterson Motorsports driver James Hinchcliffe spun twice in practice on Friday, but beat Robert Wickens's stand-in Carlos Munoz in both sessions, and was an impressive fifth in the afternoon.

Tony Kanaan will make his 300th Indycar race start on Sunday but looks set to start at the rear of the field as AJ Foyt Racing's rebuilding year continues to be difficult.