Newgarden headed into the Sonoma double-points finale just three points ahead of nearest rival Scott Dixon, recovering from being as low as eighth in the drivers' standings after a disastrous Indy 500.

The Penske driver's Indy crash was the culmination of a difficult May at Indianapolis, where he had finished 11th in the earlier road course race with technical problems.

Seven podium finishes, including three wins, after the Indy 500 meant Newgarden beat team-mate Simon Pagenaud to the title by 13 points.

But he rued the lack of a safety net in the deciding races, which included a costly pitlane crash at Watkins Glen.

"The month of May was absolutely terrible," Newgarden told Autosport.

But Newgarden said the Indy road course race and qualifying for the Indy 500 could also have been costly.

"The Indy 500 shunt was a huge whammy," he said. "But the problems started at the GP Indy where we had a pitlane speed-limiter glitch, so we did three drivethroughs because we couldn't figure out what was going on.

"We lost a podium there, maybe second place, and finished outside the top 10.

"Then we were only 22nd in qualifying for the 500, so we lost a bunch of points there [polesitter Dixon received 42, Newgarden 12]. And then we got caught up in that accident in the race." 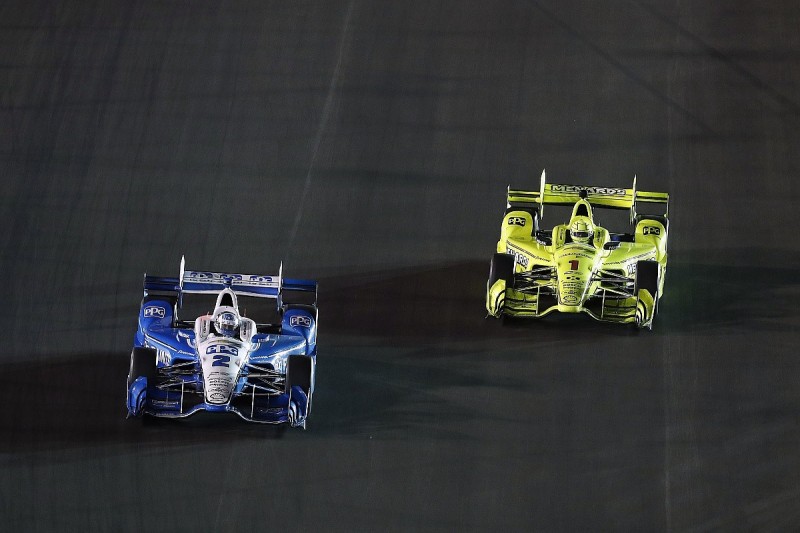 Reigning champion Pagenaud had trailed Newgarden by 26 points heading into Gateway and had squeezed ahead of him in the pits during a late caution period.

But Newgarden stayed in his team-mate's tow and on lap 218 of 248 he ran over the white line and inside kerb at Turn 1 to force his way past Pagenaud, leading to criticism in the aftermath.

Newgarden's win meant Pagenaud lost 15 points, while he gained 10, with the championship eventually decided by 13 points.

"You can flip it in every way," said Newgarden. "You can say that helped decide the title, but if Gateway had been different and I'd finished second, then that means I may have approached Watkins Glen differently.

"And it would have changed Sonoma, too. If Simon had been closer in points, I'd have done more to try and prevent him from winning the race last weekend.

"But I do think Gateway was a very important piece to the puzzle of helping us secure the championship."