Polesitter Newgarden led the field until the pace car was called on lap 30 of 85 after Andretti's Ryan Hunter-Reay ran off track at Turn 3 and his team-mate Alexander Rossi made contact with Penske driver Will Power, damaging his front wing.

Following three laps under the full-course yellow, Newgarden accelerated out of the last corner and clouted the outside wall and broke his front wing, allowing Scott Dixon into a lead he would not lose.

Newgarden had been told by his strategist Tim Cindric that his car was developing understeer earlier in the race, but the reigning champion was still baffled by the crash.

"It was a tough race. Making contact with the wall didn't help," said Newgarden, who recovered to finish ninth.

"I don't know what it was, to be honest with you, it was either marbles or dust from the sweepers.

"I don't know what to tell you, I went straight into the wall. And part of that is my fault, making a mistake, but I didn't expect it, I'll tell you that.

"I just had no idea the car was going to do that. I knew it would be low-grip, but not zero-grip. I just lost the front end completely.

"I feel terrible, it's not fun to make a mistake. This #1 Chevy was quick, I think it was capable of being in the top three or potentially winning the race if I didn't make the mistake.

"But you have days like this in racing. We have to move on now and try to pick it back up. With the championship battle, we've got a long way to go." 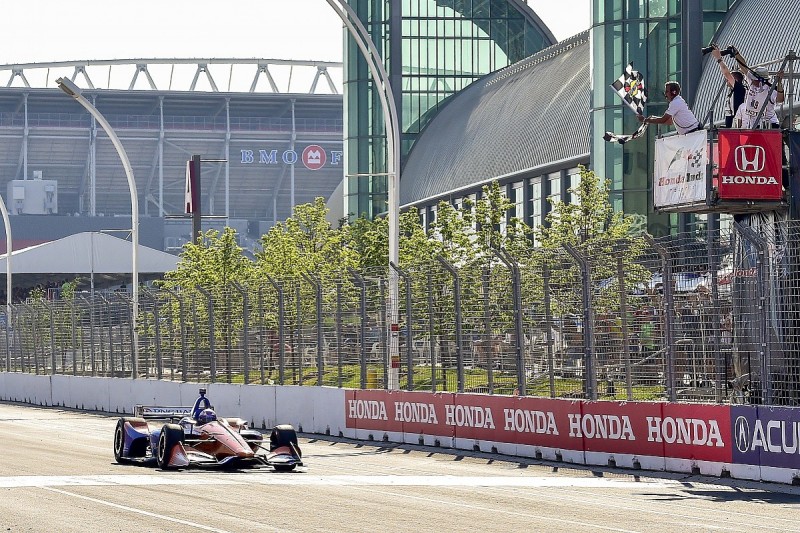 Dixon's win extended his championship lead over Newgarden to 62 points in a race in which his title rivals - including Rossi, Hunter-Reay and Power - all suffered setbacks.

The Chip Ganassi Racing driver said Newgarden's crash was the turning point of the race, and was surprised to see his rival make an error.

"[I was] thinking I can't believe this is happening, I don't want to do the same thing," he said. "It's very nerve-wracking.

"We'd been under caution for three, four, five laps. It didn't seem like Josef was in any hurry to warm up his tyres, which I thought was kind of bold.

"When the tyres are hot, as you're cooling [them] down, they can pick up so many things, all the dirt out of the grooves, rubber, and it seems like there's a lot of seams around the circuit, especially on the back straight.

"I think he just had a ton of [tyre] pick-up. When I saw it, the seas were parting, away we went, which for us [is important] especially for the championship as he's our closest competitor right now.

"I didn't expect it, but it was good for us. That's where our race was won, through the bad luck, bad situation, that Josef had."