The pair's fight began after Pagenaud's Penske crew's quicker pitstop allowed the 2016 IndyCar champion to jump Wickens for second in the final round of stops after the Schmidt Peterson Motorsports driver had stopped a lap earlier.

Pagenaud was running on cold tyres into Turn 3 as Wickens attempted a move around the outside and squeezed his rival through the corner.

The Penske driver responded by pushing Wickens wide, making the SPM driver give up the overtake, which Wickens criticised over the team radio.

But Wickens later played down the incident, saying it was "right on the edge".

"I was expecting him [Pagenaud] to actually overcut me because I made a mistake on my out lap, I was kind of cursing myself the whole lap [saying], 'Oh God, this should be interesting'.

"I tried going into [Turn] 1. He [Pagenaud] defended it. We had a little contact there.

"Then it was kind of a dogfight straight up at Turn 3. I braked as late as I could, probably the latest through the entire race.

"Give credit when it's due, Simon was able to match it on cold tyres. Hats off to him.

"Then it was just good, hard racing. I was ultimately maybe hoping for a little bit more space on the exit.

"[But] When the guy is on cold tyres, you can only expect so much because he's trying to get as much grip as he can."

"I'm coming out on cold tyres in a position advantage," said Pagenaud. "Robert tried. He had to go into turn one as deep as he could.

"I really thought I was actually going to crash in Turn 1 after we had contact.

"But I managed to get a really good run. I was like, 'OK, now I'm defending as hard as I can. I have to keep this position'.

"Obviously it's not about running each other into the walls or crashing. The key is to just be at the limit of that."

Wickens respects Rossi 'too much' 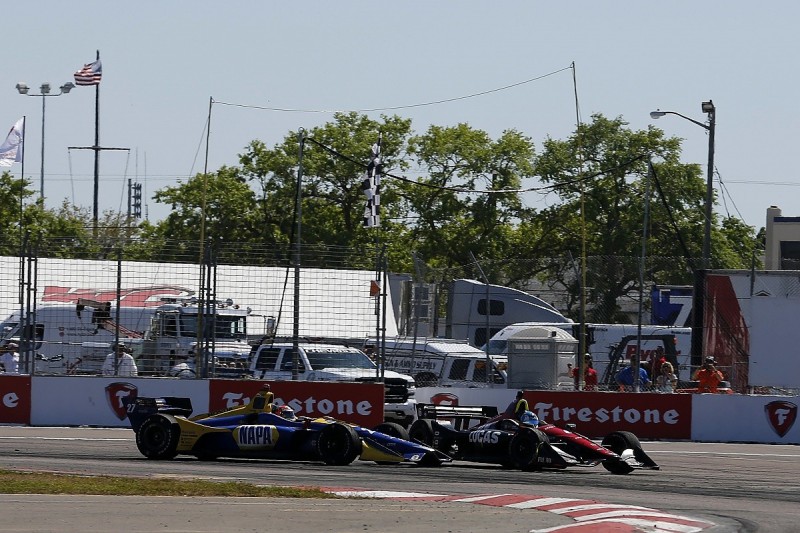 Wickens was also asked about his relationship with Andretti's Alexander Rossi, days after Indycar legend Paul Tracy suggested a rivalry between the two was something IndyCar needs.

Rossi crashed into Wickens at the St Petersburg season opener and Wickens said Rossi's loss of second place to a mechanical failure at Road America was "karma" for running him off track earlier in the race.

The duo have repeatedly stressed their friendship, but Rossi added IndyCar "isn't a friend competition" pre-Toronto.

"I'm a believer that you don't need to fight the guy in person to have a rivalry," Wickens said.

"We're both fierce competitors, but maybe I respect him more than he respects me, maybe that's the problem.