Dixon inherited the race lead when pole-sitter Josef Newgarden hit the wall on the restart after an early caution period.

Newgarden was able to recover from his brush with the wall, climbing up to ninth before the chequered flag after falling down into the midpack.

Dixon made nearest title rival Newgarden's woes worse when he held onto the lead through a safety car period and proved unchallenged in the second half of the race.

His main problem came from backmarkers, with Ryan Hunter-Reay proving problematic as the Andretti driver tried to stay on the lead lap after an early mistake and a later collision.

Dixon managed to clear Hunter-Reay after a vocal complaint on the radio and finished 5.2701 seconds ahead of Penske's Simon Pagenaud to take his third IndyCar win in Toronto.

But Pagenaud got the position late on as Schmidt Peterson Motorsports driver Robert Wickens spent the first part of the race running second, but was passed by the Penske man after the final round of pit stops.

Wickens ran into the back of Pagenaud as he tried to reclaim the position and the pair made further contact as they ran side-by-side, but Pagenaud held onto second.

The SPM driver fell away from Pagenaud in the closing stages of the race but finished comfortably ahead of Hinchcliffe in fourth to take his third podium of the season.

Newgarden's dramatic crash wasn't the only accident to take place in Toronto. 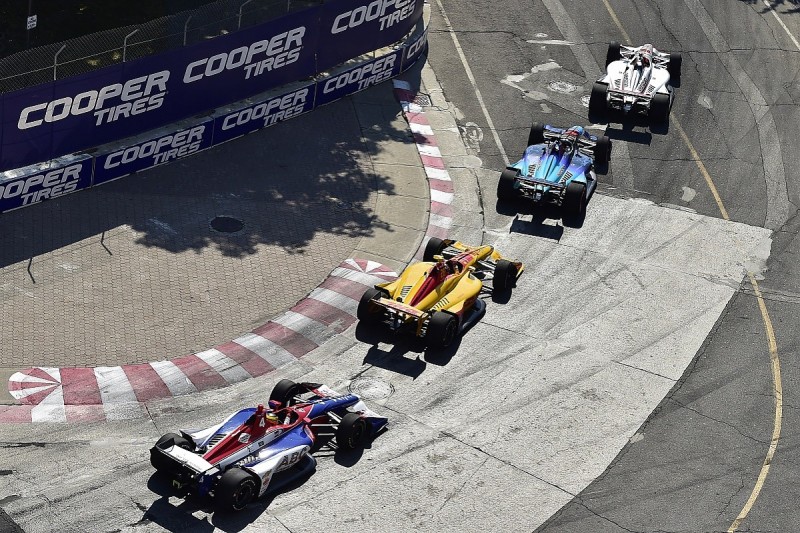 Moments before his shunt with the wall, a multi-car collision at the first corner ruined the races of multiple drivers. Rahal Letterman Lanigan Racing's Graham Rahal locked up and ran into the back of Max Chilton, sending the Carlin driver into a spin and collecting those running behind him.

Ed Jones, Simon Bourdais, Hunter-Reay, Alexander Rossi and Will Power were all caught up in the incident at the start of lap 33 of 85, but Chilton was the only driver to retire due to it.

The collision caused more potential problems for Bourdais and Rossi, who had already made front wing changes due to separate incidents early in the race.

Both came in for new front wings following the Chilton accident and both later managed to make it to the chequered flag without further incidents, with Bourdais 19th and Rossi eighth.

Charlie Kimball finished fifth to take his and Carlin's best finish of the season, ahead of AJ Foyt Racing's own best result with Tony Kanaan in sixth ahead of Zach Veach who proved apt at working his way through the field.

Takuma Sato ran into problems late in the race when he brushed the wall while sixth. The contact caused a bent tow link and he limped around the track to retire in a safe position.

Rene Binder brought out the safety car midway through the race when he came to a stop at turn eight. He managed to return to the track, finishing two laps behind the leader.

Marco Andretti had been running inside the top five late in the race when he was forced to pit for fuel at the end of the penultimate lap. Andretti dropped back to 10th, behind Rossi and Newgarden.