The Andretti Autosport driver survived a quartet of caution periods, the last of which set up a nine-lap showdown with Penske driver Will Power.

Power had twice the amount of push-to-pass available than Rossi on the fourth and final restart, but was unable to get within striking distance of Rossi and finished just over a second adrift.

Rossi converted pole into a lead at the first corner, resisting an attack from Simon Pagenaud before the Penske driver was taken out when Graham Rahal hit the back of his car.

That led to the first of the four cautions, after which Rossi was quickly able to eke out a lead of more than three seconds over second-place starter Power.

The one-time Formula 1 driver forfeited the lead during pitstops but never moved out of a de facto lead and eventually beat Power by 1.24 seconds.

Ed Jones was a surprise third for Chip Ganassi Racing after steering clear of incidents that affected a number of his rivals, including team-mate Scott Dixon - who was one of Rossi's closest challengers before he received a drive-through penalty for stopping when the pitlane was closed under a caution.

Zach Veach claimed a career-best fourth for Andretti ahead of Rahal. 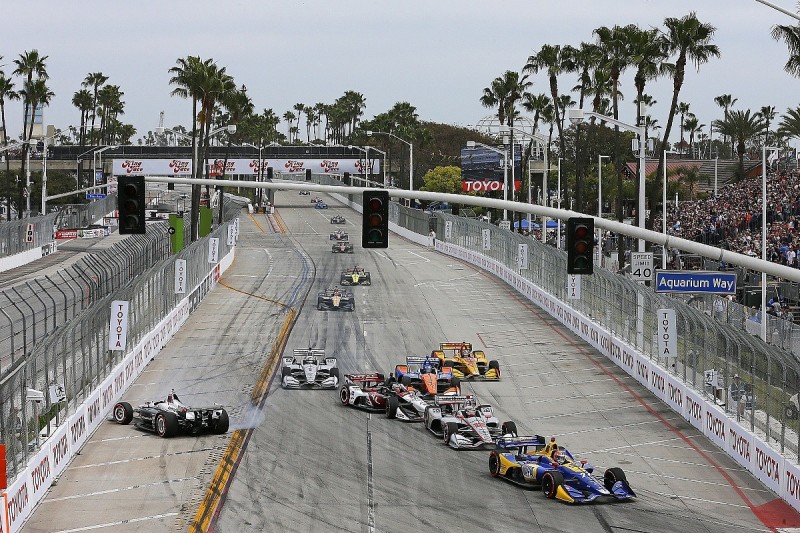 Rahal received a drive-through penalty for his incident with 2016 series champion Pagenaud at the start (pictured above), but recovered to complete the top five ahead of Veach's more experienced team-mate Marco Andretti, who climbed from 20th on the grid.

Josef Newgarden, who made an error in the final section of qualifying on Saturday, finished the race in seventh place after triumphing in a late-race duel with Tony Kanaan.

St Petersburg winner Sebastien Bourdais had led the race before his Dale Coyne Racing team-mate Zachary Claman DeMelo hit the barriers at Turn 8 and brought out the third caution of the race.

Bourdais had overtaken Dixon for second with a bold late-braking overtake on the Ganassi driver and the lapped cars of Spencer Pigot and Matheus Leist, but was instructed to give the position back to Dixon after it was deemed he crossed the pitlane exit line.

But the drama continued later on for Bourdais, who like Dixon visited the pits after they had closed but was sent straight through by his team before returning on the next lap, with rookie Jordan King tapping the Frenchman into a spin at the final corner.

Bourdais' spun car collected Andretti's Ryan Hunter-Reay, who suffered his second damaged front wing of the day after contact on the opening lap.

Robert Wickens, who was already down the order due to earlier gearbox troubles, stalled behind the collided cars.

Fellow rookie Kyle Kaiser was responsible for the second caution, he spun at Turn 2 but recovered to 16th place.