Andretti Autosport's Alexander Rossi continued his strong start to 2018, taking pole position for the third race of the IndyCar season at Long Beach by over three-tenths

Practice pacesetter Rossi claimed his second-ever pole in the series with a 1m06.5528s on his one and only run in the final qualifying session, putting a Honda-powered car at the top of the pile.

Rossi beat the Chevrolet-propelled Penske of Will Power by 0.3526s in the final part of practice, which is reserved for the top six drivers from the previous session to fight it out for pole.

Points leader and reigning champion Josef Newgarden was on course to beat both of his Penske stable-mates Power and Pagenaud before a mistake at Turn 8 reduced him to sixth, leaving Scott Dixon (Ganassi) to take fourth ahead of Graham Rahal of Rahal Letterman Lanigan Racing.

Rossi's Andretti team-mate Ryan Hunter-Reay was left baffled after he received a drive-through penalty mid-session for a pitlane exit infringement, he could only manage seventh despite topping the opening qualifying group. 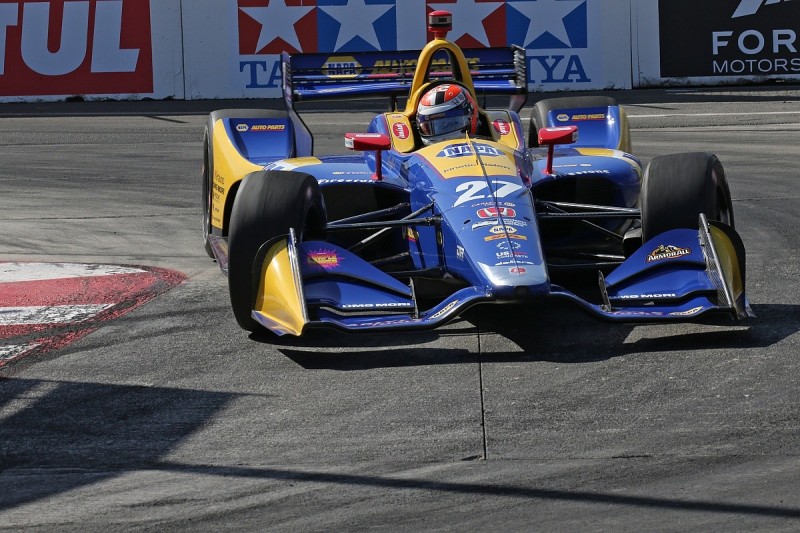 Hinchcliffe's SPM team-mate Robert Wickens rounded out the top 10, failing to make the final six for the first time in his rookie season in IndyCar.

Slowest of all was 2017 IndyLights champion Kyle Kaiser, who damaged his left-rear tyre after contact with the barriers at Turn 9.