Team Penske's Simon Pagenaud used an aggressive fuel strategy to claim his first win of the IndyCar season in the first race at Iowa, after starting last on the grid

Pagenaud begun to quickly move his way through the field on the 0.8-mile oval, rising to 15th by lap 25 and climbing to sixth on lap 100 after the first round of green-flag pitstops had shaken out.

Takuma Sato had assumed control of the race by being the first driver to pit and benefiting from fresher tyres - a theme throughout the race.

The events that allowed Pagenaud to adopt the aggressive fuel strategy began after an incident befell his Penske team-mate Will Power shortly after his second green-flag stop on lap 144.

Lapping a backmarker, the 2014 champion's car veered into the outside wall when a nut failure caused the left-front wheel to fall off - the first caution of the race requiring the safety car whilst Power's stricken machine was retrieved.

This worked well for Pagenaud, as he was running long and had moved into the lead after leaders Sato, Josef Newgarden and Power had all dived into the pits. 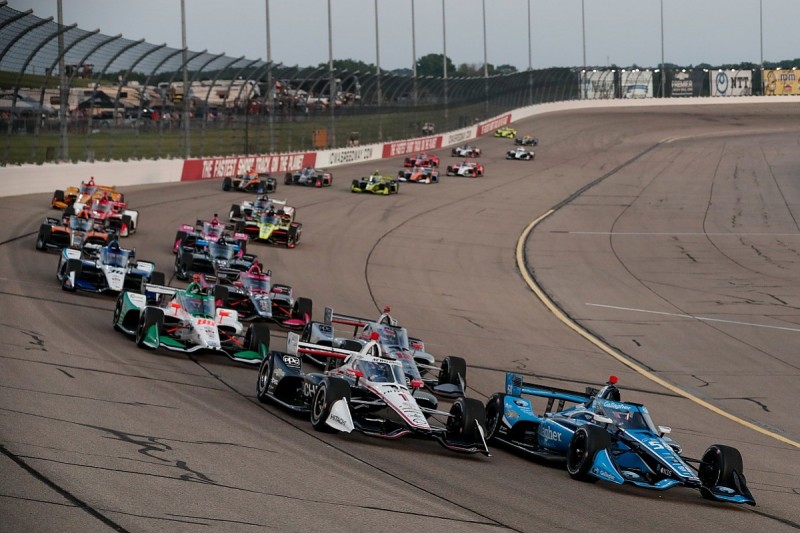 Pagenaud pitted under caution and lined up for the restart once again in sixth, but that restart was aborted leading to a frightening accident involving Colton Herta and Rinus VeeKay.

Herta's Andretti affiliated Harding Steinbrenner entry rode over the back of VeeKay's Ed Carpenter Racing car, the nose of Herta's Dallara chassis only avoiding contact with VeeKay's helmet thanks to the Aeroscreen cockpit head protection device.

Herta was also pitched into the SAFER barrier, but both drivers walked away unhurt and a lengthy safety car period was called to allow the wreckage to be removed.

Pagenaud pitted for the final time on lap 166 of 250, leaving him 84 laps to the chequered flag, right at the upper limit of the expected fuel window.

After Arrow McLaren SP duo Pato O'Ward and Oliver Askew, as well as Sato had pitted midway through the run to the flag, Pagenaud cycled into a lead held to the end for his first win since Toronto last season and Penske's first of 2020.

Championship leader Scott Dixon, who had started a lowly 17th after struggling with understeer in qualifying, also benefited from the double safety car period to take second for Chip Ganassi Racing.

Having languished on the fringes of the top 10 in the opening half of the race, he maintains a 50-point buffer over Pagenaud. 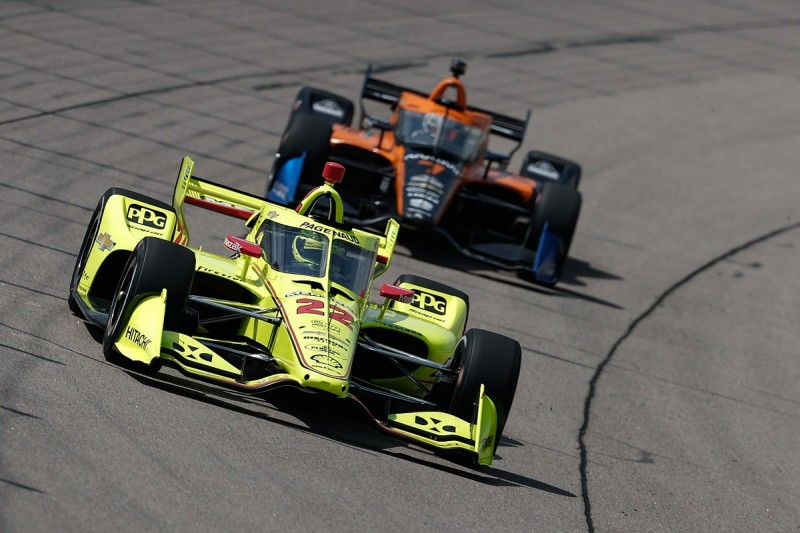 Askew and O'Ward could not quite chase down the leading duo after their late pitstops, but third and fourth represented the best result for the fledging McLaren presence in IndyCar, Askew netting a maiden podium finish to go alongside O'Ward's runner-up spot at Road America last week.

Newgarden had looked very strong in the opening half of the race, comfortably dispatching pole-sitter Conor Daly early on and fighting Power for position on occasion.

However, the reigning champion's race was scuppered by pitting just before the Power safety car, and he could not recover back to the lead.

Newgarden instead finished in fifth, passing Alexander Rossi late on as the Andretti driver struggled with fading tyres.

Jack Harvey secured his best result since the 2019 race on the Indianapolis Road Course for Meyer Shank Racing with a fine seventh place, having run comfortably inside the top 10, while Daly was unable to maintain his blistering qualifying pace and fell to eighth by the flag for Carlin.

Newgarden will start the second race at Iowa on Saturday from pole position, with Power and Daly just behind the #1 Penske.