Early IndyCar debut for Veach at Carpenter after Hildebrand injury

Veach had been set to make his first IndyCar start with AJ Foyt Racing in this season's Indianapolis 500.

Instead he has an early opportunity with ECR, for which he impressed in testing at Sonoma last year.

A bone in Hildebrand's left hand was broken on the final lap in Long Beach, when he collided with Schmidt Peterson Motorsports driver Mikhail Aleshin.

The break required surgery, performed last Tuesday at the Indiana Hand to Shoulder Centre in Indianapolis.

"This obviously is not how I had hoped this would play out, but I've done everything there was to do since surgery last Tuesday with good results," said Hildebrand.

"It seems the risk is still too high given the initial extent of the injury.

"The doctors I've worked with have been awesome to get my fractures sorted out and I trust their view of the situation.

"I am continuing to rehab with maximum focus to be back in the saddle for Phoenix." 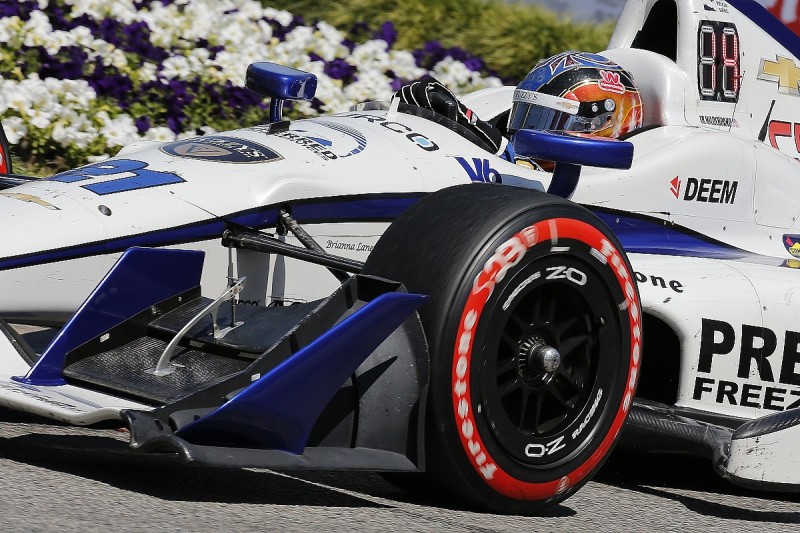 "First and foremost, my thoughts are with JR and his recovery," said Veach.

"My heart goes out to him as I suffered a broken hand a couple years ago and I wouldn't wish that upon anyone.

"This isn't how any driver wants to get his first race but with that said, I'm extremely thankful for the opportunity to sub for JR.

"It's going to be a lot to take in in a short amount of time, but I'm really excited to do the best I can for the team, as well as JR."

Though neither Veach nor temporary team-mate Spencer Pigot have competed in an IndyCar at the 2.38-mile Barber road course, Veach won the 2014 Lights race there, while Pigot swept both Pro Mazda races the same year, and in 2015 repeated the feat in Lights.

"We will obviously miss JR being in the car this weekend, but we need to focus on what is best for his recovery and for ECR while he is recovering," said team owner Carpenter.

"Zach is a driver that we have been interested in; during the test at Sonoma last year, he did nothing but impress.

"We know he will do a great job at Barber in what is a tough situation for everyone."