Trevor Carlin's team graduated to IndyCar ahead of the current season after late deals fell into place, but 19th and 20th place finishes on its debut led driver Charlie Kimball to say that performance was not good enough for Carlin.

The team then struggled at the first oval race of the season at Phoenix - which was used for extensive pre-season testing - with Kimball and team-mate Max Chilton 17th and 18th.

But at Long Beach Carlin improved, and Kimball benefitted from drivers falling out of contention to finish 10th.

Carlin said that result was what the team should have expected from the start of the season.

"You can only take these things step by step, and I admit Charlie inherited a couple of spots in the race," Carlin told Autosport.

"But then we lost a couple of spots with Max when we didn't get the strategy quite right.

"Near the end, we serviced him in a closed pit, so he had to restart at the back.

"I'd say we had a couple of cars that were capable of finishing in the top 10, and one that did that, so for our third race, that's OK.

"I'd say we're now where we wanted to be at the start of the season. I'd love to say Long Beach was our first race." 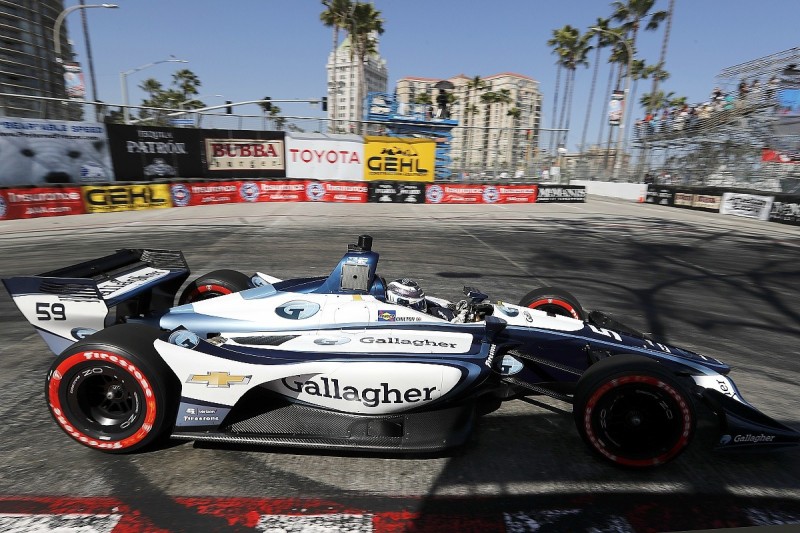 Carlin added that Chilton's qualifying position of 15th of 24 cars was a "breakthrough".

"I think we have a platform now, a direction we need to go in, and so now we'll go to Barber and the Indy road course and hopefully build on that," he said.

"And then we'll have the Indy 500 and we'll be rookies all over again, back to square one!"

Carlin admitted there would be pressure on his team at the Indy 500 because both Chilton and Kimball led laps of the race last year driving for Chip Ganassi Racing.

Chilton led a total of 50 laps and was in contention to win before finishing fourth.

"Charlie's always been good there, and Max led more laps than anyone last year, but that makes it even worse," he said.

"If we suck, everyone's going to say it's our cars that are crap."

Carlin has had success at Indianapolis in the past, having run AJ Foyt Racing's Matheus Leist to a Freedom 100 win in Indy Lights last year.

Video: How Alexander Rossi has become a 2018 IndyCar title contender