Although Pato O’Ward and Felix Rosenqvist finished only seventh and eighth in the IndyCar drivers’ championship this year, they finished behind only Team Penske and Chip Ganassi Racing drivers – in other words, beating all Andretti Autosport entries. According to Arrow McLaren SP modelling, the progress that the team has made is notable, but reliability has let it down.

“Each year has been a step forward, even though we were further down in the championship from a driver perspective this year than last year,” said Brown. “Collectively, our cars were both more competitive. We won a couple of races, Felix with a couple of poles and podiums.

“We had too many DNFs this year. You can’t unwind DNFs, but you can run the data where if nobody had DNFs, where would you have been? And what that picture shows is that we definitely were more competitive.

“Last year, we had some races where we were super-strong, but when we were off, we were off. And when you look at Will [Power, 2022 champion], who had a fantastic season, and the amount of races he won [just one], IndyCar is all about consistency. So we’re getting faster race cars, but equally if not more importantly, we’re getting more consistent race cars. And that’s what wins you championships in IndyCar racing.

“So I definitely feel we’ve taken a step forward. I think Alex Rossi brings yet more experience, which will also help bring more consistency, pace, learning and technology-sharing to the team. Penske’s been doing this a long time, so I don’t think we’re [only] one year away but I think we continue to take steps forward and I think next year will be another step forward.” 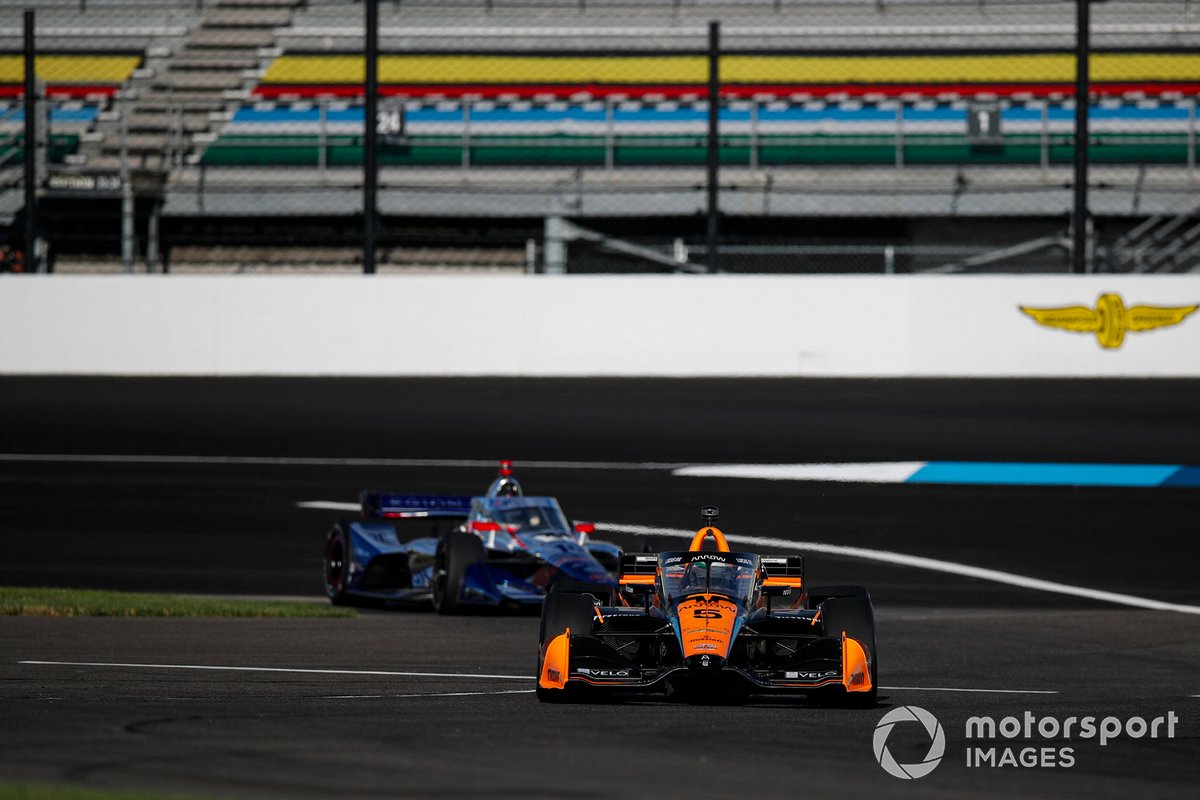 Brown yesterday announced the new job title for Ward (racing director) and new arrival Brian Barnhart (general manager). Speaking with Brown to select media today, Ward declared that while he would apply his learning from his time at the Red Bull Racing Formula 1 team and Team Penske, he would not be directly emulating them when managing the Arrow McLaren SP team.

“To me, it’s not about a copy-and-paste of Penske or Red Bull for that matter,” he said. “I told the guys yesterday: I came here with a vision of building a dominant racing team that is good to its people, fulfils its people, takes care of its people and has a lot of fun doing that and embraces individuality and diversity. That was my dream, and I fully believe that’s something we can do here.

“I think it’s going to be a little different to the Penske model, but they got a lot right – you can’t fault the results! So for sure we can learn from them, and from other sporting and racing organisations.

Both Brown and Ward said that a fourth car for the 2023 Indy 500 and a fourth full-time car for 2024 are possibilities. Explained Brown: “A fourth car at the 500 is very much under consideration. I wouldn’t want to get ahead of ourselves, but we wouldn’t be ruling out a fourth car on a full-time basis. That definitely won’t be for 2023, but as we expand the team and get into larger facilities and things of that nature, it’s something that Gavin and I have spoken about. 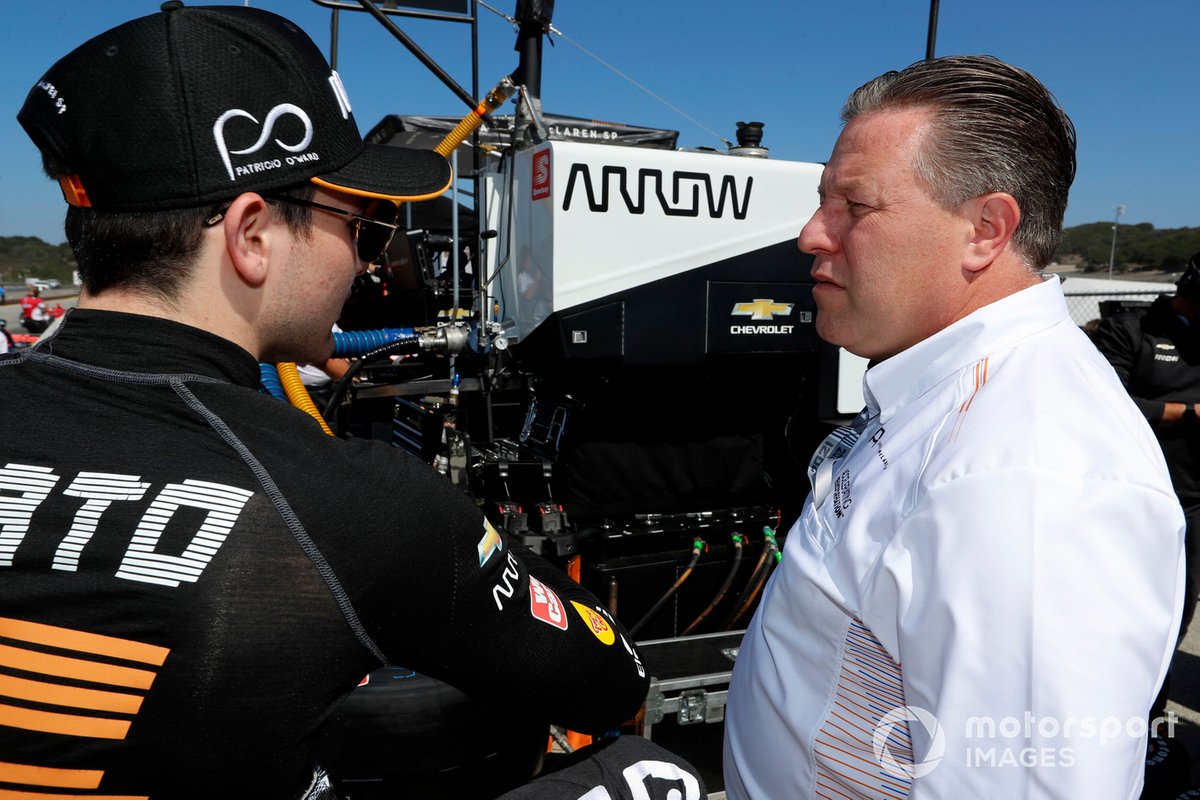 On the subject of NASCAR legend Kyle Busch – who has spoken enthusiastically about targeting an Indy 500 ride in ’23 – Brown said he has “not personally spoken with Kyle Busch, but you can read into that that someone else in our organization has.

“We want to make sure that if we run a fourth car, we’re in the mindset that we want someone who is experienced around the 500. It’s such an important race, and from a going for the championship point of view, we have three drivers who we want to finish as strong as possible, so if we ran a fourth car, we’d want that to be an additive to the three cars. So bringing in someone who’s not done it before potentially doesn’t add that value from an experience point of view.

“[Busch is] an awesome talent who would be huge news for the Speedway. I think everyone’s under consideration if we decide to do it, but experience is right at the top of the list regarding what’s going to be most important to us.”

Ward said that retaining a skeleton third-car staff full-time (rather than just for the Indy 500), even before the current US motorsport recruitment crisis, had been a help when expanding to three cars this year with Alexander Rossi joining incumbents O’Ward and Rosenqvist.

“This team has been carrying some good depth,” he said. “For sure, the whole paddock is in a bit of a fight to get the best people and there is a shortage of that, and I won’t say we had every single position lined up and ready to fill. But we do have a good amount of it resource-wise, and logistically we were very well aligned with bringing in key people to not just fill spots but actually build us up in strength and depth…

“On the people side of things, we still have a few vacancies to fill. We’re looking for people who are on board with our vision for where this team’s going. I think people see the excitement and the momentum of this team.”

Ward later added: “We’re full push on recruitment right now. We’re really getting there. Zak touched on it: reliability is where we gave away the most points last year, so that’s a big push from us to kinda button up in that area.

“But in truth, we need to get better in just about every area. There’s definitely things we do exceptionally well, as you would expect – we’re building from a strong base. It’s tweaks… a lot of details to get from where we are now to really consistently bring it to the front to be the best team in the series, this exceptionally competitive series.”