Josef Newgarden jumped to the front with an inspired Penske strategy call and then fended off Alexander Rossi to win the Texas Motor Speedway IndyCar race.

Championship leader Newgarden had spent the first half of the race mostly in the lower part of the top 10, but pitted to top up with fuel during the first yellow.

That caution did not come until two thirds of the way into the race, and happened when Zach Veach tagged the Turn 2 wall, broke his suspension and then had a series of wild spins and twitches down the back straight.

The strategy call committed Newgarden to a four-stop plan on a night when the leaders were trying to get through on three, but Newgarden surged to the front as those ahead pitted for the third time and had enough of an advantage to stay ahead when he dived in for his quick fourth stop.

Most of the drivers who had looked like potential winners during the evening were out of contention by the closing stages.

Takuma Sato had led the first 60 laps from pole, keeping Scott Dixon at bay, but then came into his pitbox far too quickly, hitting crew member Chris Welch and the pitwall before finally stopping in the Andretti Autosport area.

Welch was unhurt, but Sato ended up three laps down in 15th.

Ryan Hunter-Reay took the lead at that point, but was on an aggressive fuel strategy and pitting earlier than the other frontrunners. 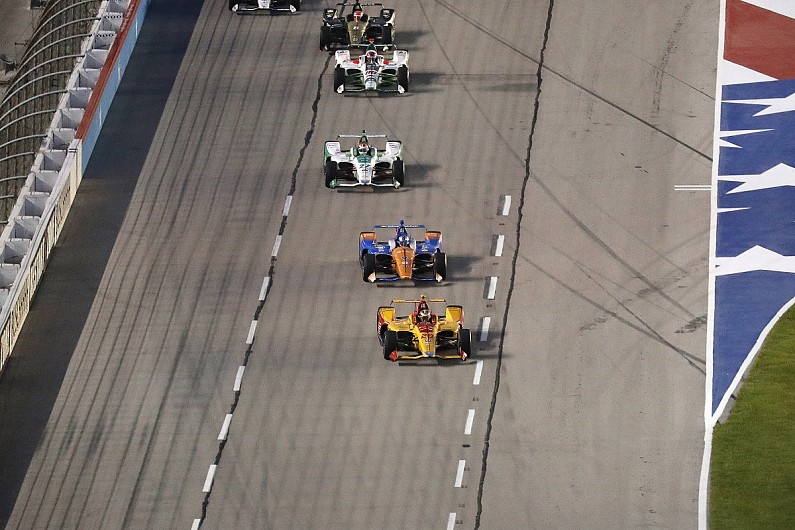 Though that allowed him to jump Dixon as the Ganassi driver rejoined from his first stop and to briefly lead by three seconds in the middle of the race, Hunter-Reay looked doomed to have to make a fourth stop and fall back. He was also overhauled by Dixon and Rossi as the race headed into its final stages.

When lead contender James Hinchcliffe caused a second yellow with 28 laps left by emulating Veach's incident but making it all the way to the inside wall for a harder second hit, Hunter-Reay cut his losses and pitted, dropping to the tail of the cars on the lead lap.

Dixon attacked Newgarden at the restart to no avail, then was attacked himself by Colton Herta after the rookie had charged past Rossi into third.

Herta's attempt to go down the inside of Dixon ended in contact that put both into the wall and out of the race, leaving Newgarden and Rossi to go head to head for victory in the remaining laps.

Rossi made a series of bids for the lead on the outside line at first, before Newgarden managed to edge clear and secure the win by 0.8164s.

Ex-Formula 1 driver Marcus Ericsson claimed seventh in only his second oval race, ahead of second row starter Sebastien Bourdais - who repeatedly fell back during pitstop sequences.

Will Power had a muted run to a lapped ninth, with Marco Andretti rounding out the top 10 and Conor Daly taking 11th on his first IndyCar appearance with Carlin.

Ganassi's second driver Felix Rosenqvist was two laps down in 12th, followed by Ed Carpenter Racing duo Ed Carpenter and Spencer Pigot - who rapidly fell to the back in the opening stint and remained off the pace.