The Rahal Letterman Lanigan driver, who won from pole at Barber Motorsports Park two months ago, produced a two-lap average of 220.250mph.

Thursday practice pacesetter and reigning champion Scott Dixon's first lap put him on course to depose Sato, but he faded to end up 0.088mph adrift as he put his Ganassi car on the outside of the front row.

Dale Coyne Racing's Sebastien Bourdais had a prolonged spell on provisional pole when the session was briefly paused for drizzle.

Ryan Hunter-Reay completed an all-Honda-powered top four in the fastest of the Andretti Autosport cars.

Simon Pagenaud was top Chevrolet runner in fifth for Penske. His team-mates Josef Newgarden and Will Power line up seventh and 15th respectively for Saturday night's race.

Spencer Pigot will start between Pagenaud and Newgarden in sixth for Ed Carpenter Racing.

Colton Herta had been fastest in the Friday practice session but drew an early spot in the qualifying running order and could only manage 10th on the grid behind James Hinchcliffe and Graham Rahal. 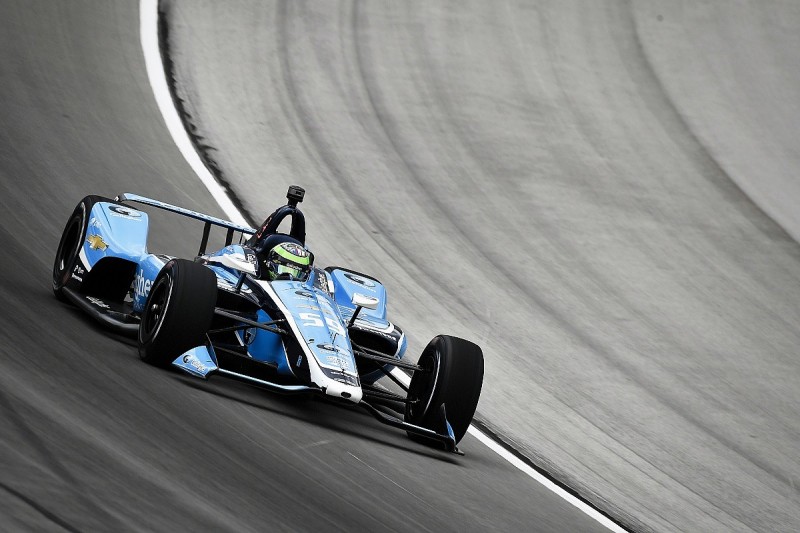 The back row is filled by two veterans who had incidents on their qualifying runs.

Marco Andretti managed to catch a wild series of twitches without crashing, but the lost momentum consigned him to a very slow run and 21st on the grid.

He is joined at the back by Tony Kanaan, who had a glancing blow with the wall on the exit of Turn 2 and abandoned his run.