The six drivers fighting to get onto the Indianapolis 500 grid got only 20 minutes of practice on Sunday morning before rain, and Fernando Alonso had a major set-up issue.

This group was due to get one hour of practice on Sunday morning ahead of their single-run 'Bump Day' qualifying battle.

When Alonso hit the track, the #66 McLaren Dallara-Chevrolet appeared to be running much too low, striking sparks and smoke as it bottomed out on the track.

He was called in for adjustments and the friction appeared reduced but not cleared when he rejoined, so he pitted again for further changes.

While remedial work started, the rain started falling hard enough to halt the session and then increased to the point that it was abandoned.

The rain briefly stopped but has now returned, meaning the rest of the Sunday schedule is up in the air.

IndyCar originally intended for the nine drivers taking part in the pole shootout to get 30 minutes of practice before the two qualifying sessions. The last row contenders will not get any more practice.

If it proves impossible to run on Sunday, the last row session will be held on Monday instead.

The 'Fast Nine' pole shootout will be cancelled in that circumstance and the leading positions set on first qualifying speeds, which means Spencer Pigot would give Ed Carpenter Racing another Indy pole. 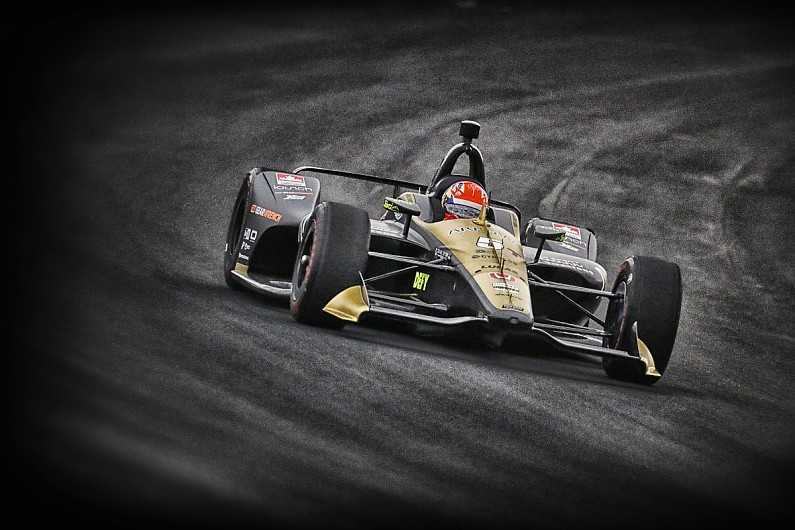 In the little running that took place, Hinchcliffe - using his spare car following his Saturday crash - and Karam completed mock qualification runs in the low-228mph/high-227mph range.

O'Ward was struggling in the 225mph region, and Chilton's three laps went from 227.4mph down to 226.1mph before he pitted due to his engine running too hot.

Kaiser did not participate.