The 19-year-old held a decisive 25-point lead over team-mate Colton Herta, who has been linked to an IndyCar graduation in 2019, coming into the weekend. That grew to 26 points once O'Ward took pole on Friday afternoon.

He then won a thrilling battle with title rival Herta on Saturday for his eighth victory of 2018 to take the crown.

O'Ward initially held the lead over Herta at the start of the race but fell behind his team-mate early on.

But Herta had no answer to O'Ward's forceful response on lap 14 of 35, a move that decided the title. 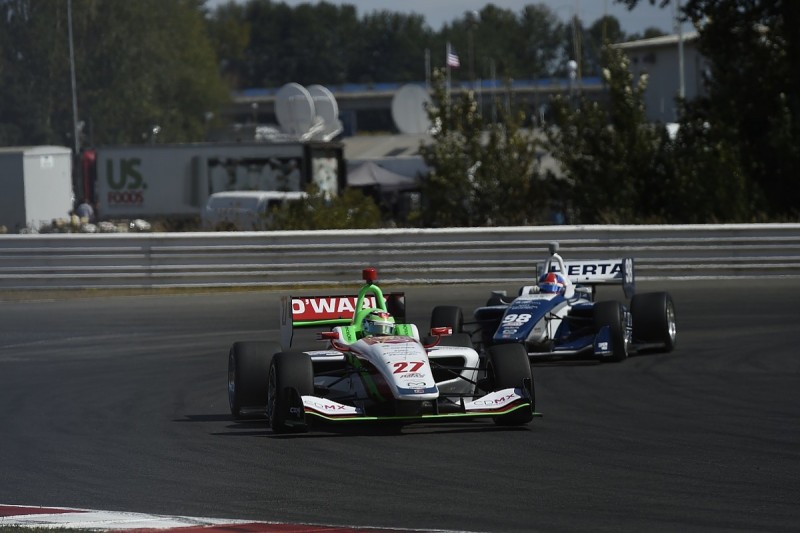 O'Ward is the last Indy Lights champion to earn an IndyCar scholarship from outgoing sponsor Mazda, meaning he will receive $1million to go towards a top-tier season in 2019 - including the Indianapolis 500.

His Indy Lights campaign came after he joined the Road to Indy ladder in 2015, narrowly missing out on the Pro Mazda title to Aaron Telitz the following year.

The Indy Lights category has suffered a downturn in numbers for 2018, with only seven full-time entries contesting the current campaign. The series has put that down to Carlin's graduation to IndyCar and the loss of drivers such as AJ Foyt Racing's Matheus Leist.

IndyCar has recently announced a series of initiatives to correct that trend, aiming to slash the costs of competing.

The series' planned Formula 1-inspired superlicence system for 2019 has also given generous point totals in favour of Indy Lights drivers to encourage young talent to use the series to get to IndyCar.