Castroneves converted pole into a lead from Cameron at the start, with Oliver Jarvis just holding off Joest Mazda team-mate Jonathan Bomarito and the Wayne Taylor Racing Cadillac of Renger van der Zande for third.

The leading Acuras and Mazdas quickly separated themselves from the Cadillacs of van der Zande and Joao Barbosa, but Bomarito took advantage of a slight delay for Jarvis in traffic and swooped past into third.

Taylor took over the #7 Acura from Castroneves when both Penskes stopped for the first time, but on cold tyres first lost out to Cameron at Turn 2 and then gave in to the charging Mazdas and fell to fourth.

The #7 then avoided a penalty when Taylor bounced Bomarito off the track in order to get back up to third, before stopping at mid-distance and holding station.

The two leadings cars stopped on lap 70 of 125 - Montoya taking over from Cameron and Tristan Nunez taking control of the #77 Mazda, which had fallen five seconds back when Jarvis got caught behind Colin Braun's lapped Core Autosport ORECA - with both emerging behind Taylor's Acura. 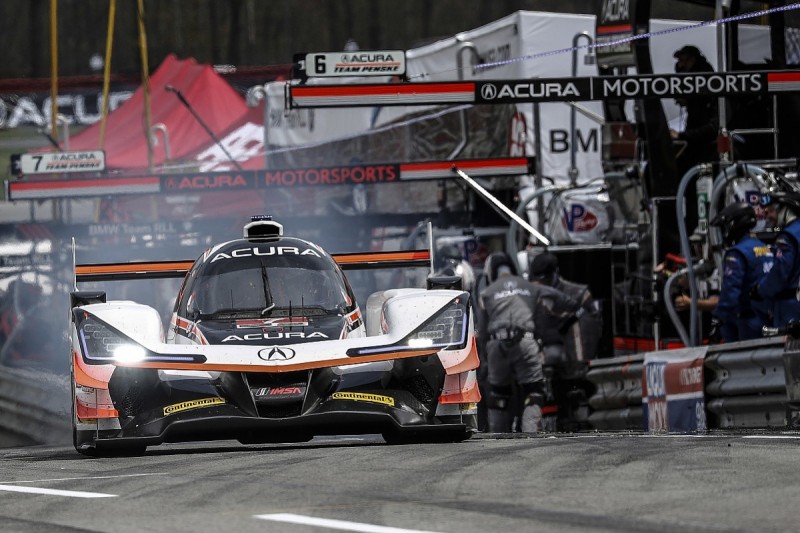 Taylor had extended his lead to 12s by the time he made his final scheduled stop on lap 91, at the same time as Nunez, while Montoya stopped next time by and whittled the lead down to 1.8s as Taylor hit traffic.

A lapped Pipo Derani refused to give way to Montoya, though, and allowed Taylor to extend his lead on the following lap to 3.3s.

Taylor eventually crossed the line 8.5s clear of the #6, with Nunez.

The second Mazda's charge ended midway through the race after Bomarito had handed over to Spencer Pigot, who dropped away from the lead battle before he was struck by an errant GT Daytona car and headed for the pits.

The #5 Action Express car of Barbosa and Filipe Albuquerque, winner of two of the three IMSA rounds before Mid-Ohio, was the leading Cadillac DPi-V.R, but finished almost a minute off the podium in fourth and just ahead of van der Zande and Jordan Taylor's WTR car.

Top LMP2 was the PR1/Mathiasen Motorsports entry of Sebastian Saavedra and Gustavo Yacaman in sixth.

The Acura one-two comes four races into the car's IMSA effort, which is Penske's first major sportscar project since its LMP2 Porsche programme in the American Le Mans Series from 2006-09.