Following a caution period, the torque from Derani's Cadillac enabled him to gun past Bomarito into Turn 12, and he immediately closed onto the tail of leader Montoya.

But when Derani was held up by Richard Heistand's GTD Lexus, Bomarito dived to the inside and passed them both at Turn 11 to lead.

When the second caution period was called all but one of the Prototypes - Tristan Nunez in the #77 Mazda - pitted.

Ricky Talor took over from Castroneves and beat team-mate Dane Cameron to the exit of the pitlane once the latter had taken over from Montoya.

After another caution, Cameron quickly passed the sister car and then overhauled Nunez into Turn 11.

But Cameron found himself under pressure from a hard-charging Felipe Nasr late on after the ex-Formula 1 driver had taken over from Derani.

Nasr got around Stephen Simpson for third, passed Taylor for second, and began homing in on Cameron, as the leading pair pulled clear of the pack.

In the final ten minutes, Nasr started pressuring Cameron hard as they weaved through GTD traffic.

But the Acura pulled away again, to the tune of 1.3s, when Nasr made a braking error at Turn 7 and ran long.

Cameron eventually crossed the line 0.82s ahead of Nasr to score the second consecutive win for the #6 Acura Team Penske ARX-05.

Taylor was 15s down in third ahead of the two JDC Miller Cadillacs and the second AXR Cadillac. 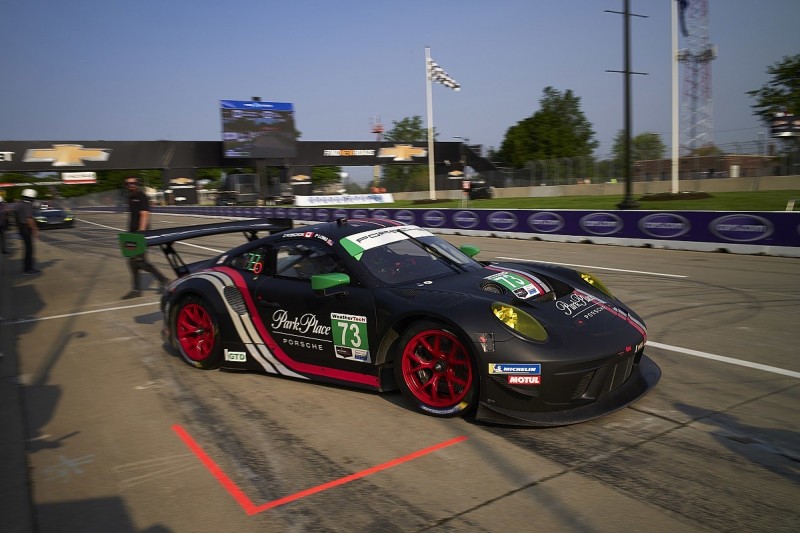 In the GT Daytona class was decided by a battle following a caution period when Pat Long took the lead for the Park Place Motorsports Porsche.

He led ahead of the MSR Acura now driven by Katherine Legge, with the two Lexuses - now driven by Jack Hawksworth and Townsend Bell.

But the second MSR Acura had a failed left-rear wheelgun, and at the restart its driver Mario Farnbacher thumped its tail hard into the wall, bringing out the yellow again.

On the restart, Hawskworth slipped up the inside of Legge to grab second and started pressing Long for the lead.

At Turn 7, Hawksworth made the move and made it stick.

When Legge tried also to pass the 911, Long drove her wide, which allowed Bell into third exiting Turn 8.

Right behind Legge was now Bill Auberlen in the Turner Motorsport BMW M6, which set GTD pole on Friday with Robby Foley but was penalized for a camber discrepancy and had to start from the back of the field.

The order remained the same on the final restart, with Hawksworth well able to pull clear of Long who in turn remained out of reach of Bell who had Legge and Auberlen filling his mirrors.

With nine minutes to go, Legge was knocked into a spin by Auberlen at Turn 5 and she fell to 10th in class and IMSA felt no action needed to be taken.

Hawksworth hung on to beat Long by 0.83s with Bell only 1.2s further back.

Auberlen's BMW stopped with two to go leaving fourth to Lally, ahead of Sellers and Dalziel.