Cadillacs locked out the top two positions in the Daytona 24 Hours after the halfway mark, as a strong stint from Loic Duval put the JDC-Miller MotorSports car in front.

The leading cars had completed 416 laps after 12 hours, putting the 2018 record race distance of 808 laps within reach.

As night fell, the race had appeared to be developing into a two-horse contest between the best of the Mazda RT24-Ps and the WTR Cadillac, but the third full-course yellow period of the race just after the 10-hour mark shook up the order.

Tristan Nunez had just pitted the #77 Mazda, which had gone off sequence with the leaders during the previous caution, before the GEAR Racing Lamborghini Huracan GT3 Evo of Tatiana Calderon crawled to a halt on track with a fuel pump problem.

That allowed the #77 Mazda of Nunez, Oliver Jarvis and Olivier Pla to move back into the lead briefly before Nunez picked up a drive-through penalty for passing under yellow.

With the WTR squad performing a brake change during the caution period, the main beneficiary was the JDC-Miller squad, with Duval taking the lead and then pulling away from Briscoe, who was able to get the #10 car back up to second after 12 hours.

Pla had the #77 Mazda back up into third as Filipe Albuquerque pitted just shy of half-distance in the Action Express Racing Cadillac. 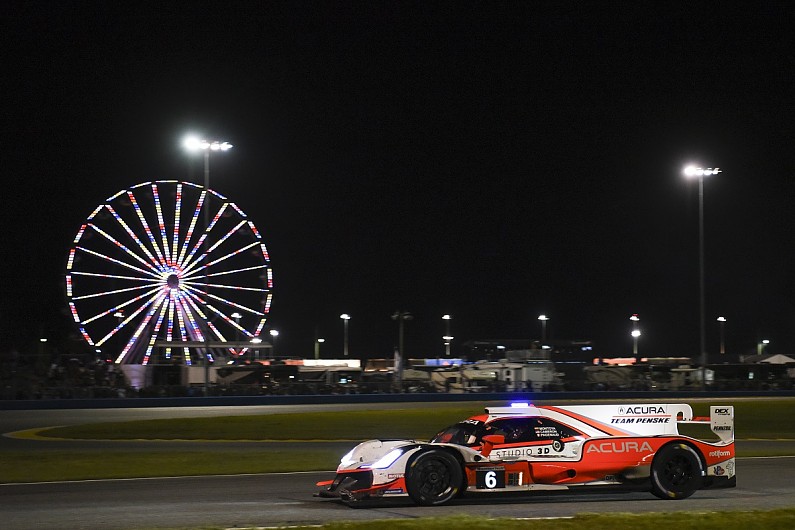 The best of the Acura Team Penske cars continued to struggle and was running sixth in the hands of Simon Pagenaud before Albuquerque's stop.

After 12 hours, Edwards was less than a second clear of the best of the new Porsche 911 RSR-19s, the #912 car of Laurens Vanthoor, Earl Bamber and Mathieu Jaminet, with the sister #911 machine of Nick Tandy, Frederic Makowiecki and Matt Campbell just a further two seconds back in third.

One of the two mid-engined Corvette C8.Rs, the #4 car, dropped out of contention with an oil leak, with the surviving #3 car running fifth in class behind the solo Risi Competizione Ferrari 488 GTE after 12 hours.

Bryan Sellers powered to the front of the GT Daytona pack at the restart at the wheel of the Paul Miller Racing Lamborghini Huracan GT3 Evo, and at halfway the American was six seconds clear of Mirko Bortolotti in the WRT Audi R8 LMS.

The PR1/Mathiasen Motorsports ORECA-Gibson 07 had pulled out an advantage of almost a lap in the LMP2 division over its nearest rival, the DragonSpeed ORECA.