Renger van der Zande held a seven-second advantage at the front of the field in the WTR Cadillac DPi-V.R shared with Ryan Briscoe, Kamui Kobayashi and Scott Dixon at the six-hour mark.

The Dutchman vaulted to the top of the order when the Daytona Prototype international pack pitted midway through the sixth hour.

The ninth round of scheduled pitstops shuffled the order at the front of the Daytona field: van der Zande jumped from fourth to first, while Oliver Jarvis in the best of the Mazda RT24-Ps went from first to fourth.

The Action Express Racing Cadillac driven by Filipe Albuquerque held second position, with an advantage of 11s over the third-placed Penske Acura ARX-05 with Simon Pagenaud at the wheel.

Mazda driver Jarvis was a further 2.5s back.

The WTR Cadillac had moved into the lead in Kobayashi's hands late in the third hour before receiving a drivethrough penalty for pitlane speeding.

It was back up to second when the safety car came out for the first time late in the fifth hour, but dropped back as the DPi field dived into the pits when the team lost track position changing the rear bodywork.

The Action Express Cadillac had also suffered a delay early in the race when Nasr was forced to make an unscheduled pitstop to have debris removed from the engine air-intake.

One car each from the Mazda Team Joest and Acura Penske squads was delayed during the fourth hour.

Helio Castroneves in the #7 Acura and Harry Tincknell in the second Mazda came together at the Bus Stop chicane on the back straight. Both cars spun, the Penske car ending up with rear end damage after hitting the barriers. 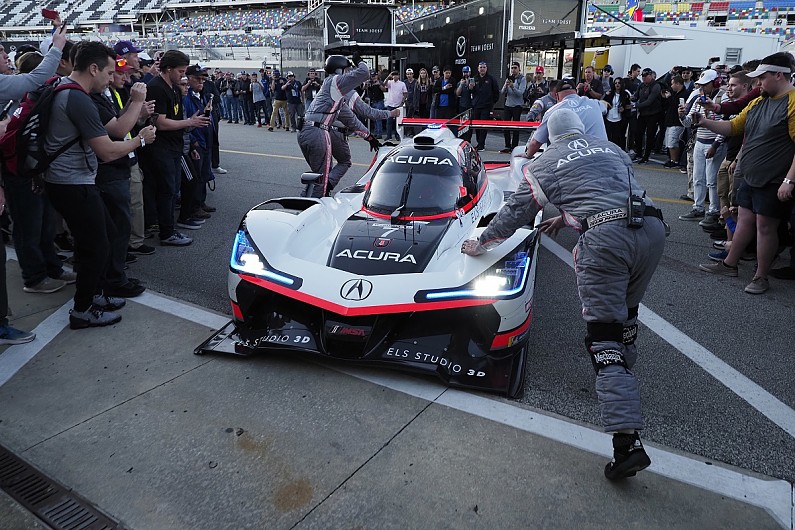 Castroneves drove straight back to the team's garage where the car lost half an hour to repairs.

Tincknell did not hit anything, but was deemed responsible for the incident and given a 60s penalty.

The GT Le Mans class was led by the Rahal BMW M8 GTE driven by Jesse Krohn by a shade under a second from Laurens Vanthoor Porsche 911 RSR. 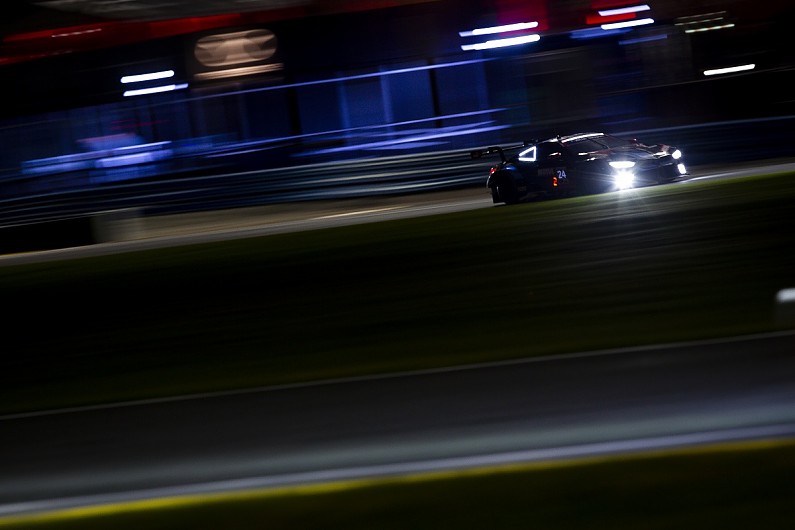 Krohn, who is partnered with John Edwards, Augusto Farfus and Chaz Mostert, had moved back into the lead after a three-way scrap involving the two Porsches in the wake of the safety-car period.

The second of the CORE-run factory Porsches was another second back in third position in the hands of early race leader Nick Tandy.

The best of the new mid-engined Chevrolet Corvette C8.Rs ran fourth on six hours in the hands of Tommy Milner.

The LMP2 class was headed by Gabriel Aubry in the PR1/Mathiasen ORECA-Gibson 07, which had led all but a handful of laps after Ben Keating built up an early lead of approximately 40s.