JDC-Miller MotorSports led the Daytona 24 Hours with five hours to go after fellow Cadillac squad Wayne Taylor Racing lost a big lead to a full-course yellow and a penalty.

The #10 Cadillac DPi-V.R shared by Ryan Briscoe, Renger van der Zande, Scott Dixon and Kamui Kobayashi had built up a lead of more than a minute during what turned out to be the longest green flag period in the blue riband IMSA SportsCar Championship round's history.

But that advantage had already been reduced to just 17 seconds at the three-quarter distance mark, as Briscoe passed through the pitlane without stopping shortly after making a routine stop - which was followed by the fourth caution period of the race, triggered by the Riley Motorsports Mercedes-AMG GT3 stopping out on track.

All the leaders took the chance to pit under yellow, but Briscoe picked up a 60-second stop-and-go penalty for not respecting the red light at the end of the pitlane.

Having led the field to green, the Australian served the penalty and slipped to fourth, also crucially dropping off the lead lap.

That promoted Loic Duval at the wheel of the #5 JDC-Miller car, which the Frenchman shares with Joao Barbosa and Sebastien Bourdais, back into the lead, with eight seconds in hand over the #77 Mazda RT24-P of Olivier Pla, Oliver Jarvis and Tristan Nunez. 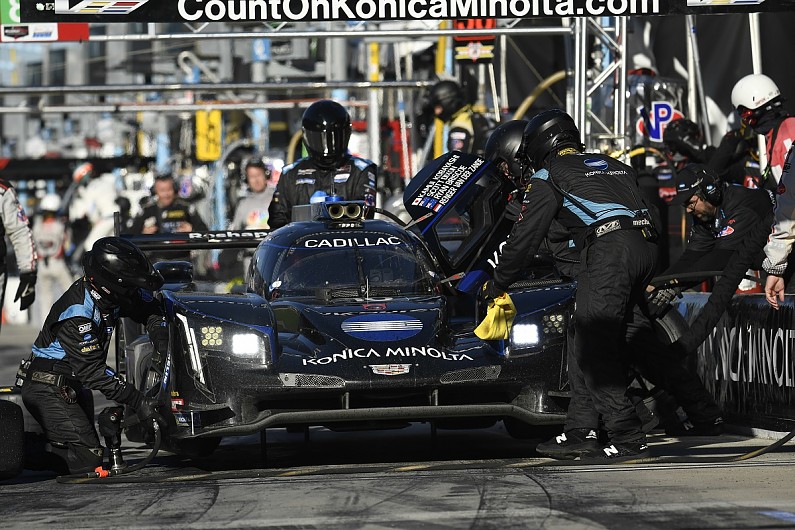 Both Mazdas had dropped off the lead lap when the WTR car's advantage was at its largest, but the ensuing caution period gave the Japanese cars a reprieve.

The #31 Action Express Racing car had been running fifth and a lap off the pace, having earlier suffered a puncture, before it was wheeled behind the pit wall just shy of the 19-hour mark.

That promoted the #6 Acura Team Penske entry, which had been suffering in the night with bottoming issues, to fifth place, three laps off the pace.

Porsche held a 1-2 in the GT Le Mans class, with the #912 machine of Earl Bamber, Laurens Vanthoor and Mathieu Jaminet just two seconds clear of the sister #911 car of Nick Tandy, Frederic Makowiecki and Matt Campbell.

The #24 BMW M8 GTE that led the class for much of the race dropped to fourth after a brake change, before battling back up to third place ahead of the best of the new mid-engined Corvette C8.Rs, the #3 car.

DragonSpeed's ORECA-Gibson 07 held a two-lap lead in the battle for LMP2 honours after the PR1/Mathiasen Motorsports car was forced to stop to replace two bent toe-links.