Action Express duo Joao Barbosa and Filipe Albuquerque recovered from running as low as eighth early on to win a frenetic IMSA SportsCar Championship race on the streets of Long Beach.

But Albuquerque cycled into the lead after his second pitstop, brought forward to just past half-distance due to a slow puncture, and held off the advances of Ricky Taylor's Penske Acura that Helio Castroneves had started from pole to win the 100-minute sprint by 0.74 seconds.

Castroneves held the lead until he accidentally pressed the pitlane speed limiter exiting the hairpin on lap eight, allowing the #31 Action Express Cadillac of Felipe Nasr and Tristan Nunez's #77 Joest Mazda through.

But the #31 team's challenge fell by the wayside after the first round of pitstops, staged under a caution brought out when Harry Tincknell's #55 Mazda briefly stopped exiting the fountain turn.

The right-front wheel parted ways with the car on Pipo Derani's out-lap, and condemned the Sebring 12 Hour-winning crew to a sixth-place finish.

That promoted Oliver Jarvis to the lead in the #77 Mazda from the Acuras of Ricky Taylor and Dane Cameron, with Albuquerque fourth.

But a slow final stop from the Mazda crew dropped Jarvis to fourth at the finish, while Albuquerque - struggling with only one new right-front to Taylor's two new rears - held on for victory.

Daytona winner Wayne Taylor Racing was left to rue an opportunity missed to capitalise on the #31 Cadillac's misfortune, when Renger van der Zande hit the Turn 9 wall shortly before the race's mid-point.

The #10 Cadillac had recovered from a drive-through penalty when Jordan Taylor - fresh from an appendix operation on Monday - overtook Juan Pablo Montoya's Acura under yellows on lap two to run ahead of Albuquerque prior to its race-ending accident. 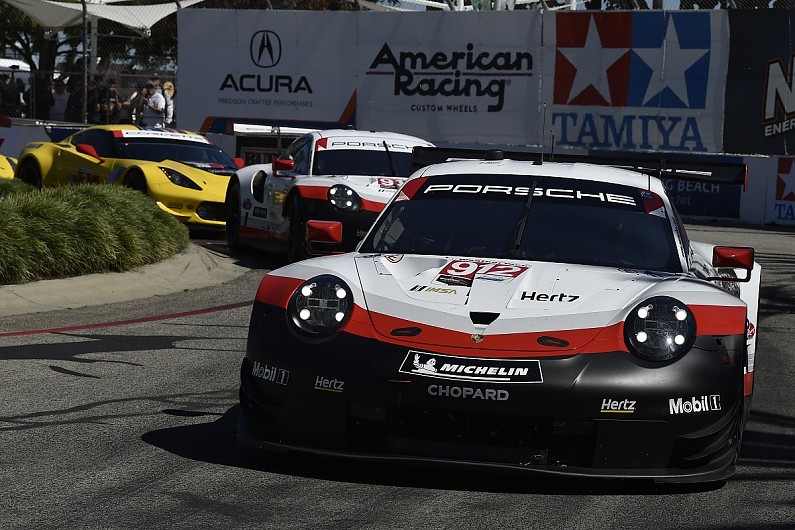 In GTLM, the #912 Porsche of Laurens Vanthoor and Earl Bamber took victory as Dirk Mueller and Jan Magnussen clashed while contesting second on the final lap.

Vanthoor had tracked polesitting team-mate Nick Tandy in the opening laps, and Bamber remained behind the #911 now driven by Patrick Pilet after the pitstop.

But Pilet lost ground being divebombed by the recovering DPi of Derani and was passed by an opportunistic Bamber, who then took the lead after the early-stopping #66 Ford of Mueller - who had benefited most from the caution flag - got a poor exit out of the hairpin on lap 38.

Despite a damaged diffuser, Bamber made a break out front while Mueller set about defending from the chasing pack. As Pilet faded, Magnussen led the challenge for second in the #3 Corvette, but when Mueller slowed exiting Turn 8 the Dane was left with nowhere to go and shunted Mueller into the wall.

Magnussen brought his damaged car across the line second ahead of the sister Corvette of Tommy Milner and Oliver Gavin, while Mueller and Sebastien Bourdais - subbing for the unwell Joey Hand - were still classified fourth.