The #7 Penske Acura held a narrow lead with Alexander Rossi at the wheel as the Daytona 24 Hours reached the halfway point.

The Acura ARX-05, which Rossi shares with Helio Castroneves and Ricky Taylor, was five seconds up on the Wayne Taylor Racing Cadillac under the safety car at the 12-hour mark of the 2019 IMSA SportsCar Championship opener.

The Acura had been at the top of the leaderboard for much of the 10th, 11th and 12th hours and moved back to the front when the safety car came out seconds before the halfway mark was reached.

Race leader Pipo Derani ducked into the pits in the #31 Action Express Racing Cadillac DPi-V.Rs along with second-placed Jordan Taylor in the WTR car when the yellows flew.

The second Penske Acura, which was running fourth in the hands of Helio Castroneves, also came into the pits and was classified in third position at 12 hours.

Both Acuras had needed new nose sections in the second six hours of the race: Taylor had hit Timo Bernhard in the #77 Mazda early in the seventh hour and then Pagenaud had an incident with a GT Daytona car that sent him off track at the infield kink in the 10th hours.

The pole-winning Joest Mazda's challenge went off the rails late in the seventh hour.

First the #55 RT24-P with Olivier Pla at the wheel slowed with what turned out to be a fuel leak and then Bernhard stopped the #77 sister car at the Bus Stop chicane with flames licking from its exhaust.

The #77 car in which Oliver Jarvis had claimed the pole was brought back to the paddock and was eventually retired with what was described as an internal engine failure. 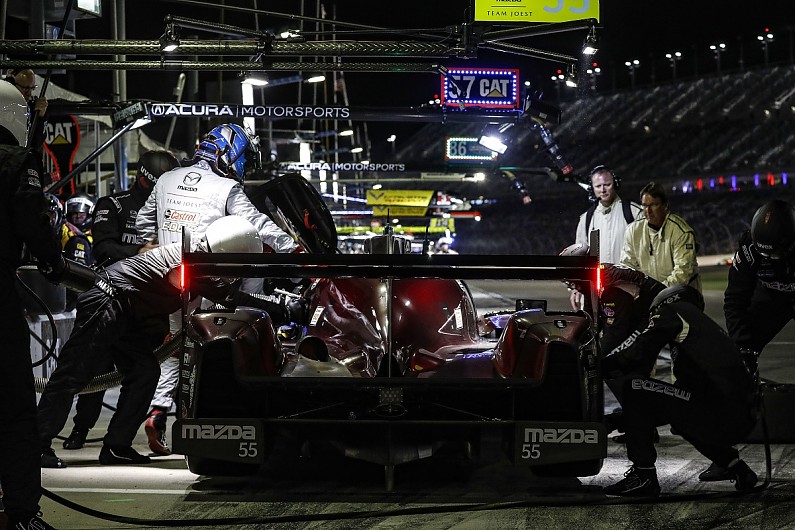 The safety car that followed meant that the #55 car, which Pla shares with Harry Tincknell and Jonathan Bomarito, lost only three laps and was only a lap down on 12 hours.

The CORE Autosport Nissan DPi dropped off the lead lap late in the 11th hour after attention to the transmission electronics.

The #18 DragonSpeed ORECA-Gibson 07 continued to lead LMP2 in eighth place overall, seven laps down on the leading Acura.

Frederic Makowiecki led the way in GT Le Mans aboard the best of the CORE-run factory Porsche 911 RSRs.

The Frenchman, who is teamed in the #911 Porsche with Nick Tandy and Patrick Pilet, moved back into the class lead when Antonio Garcia in the #4 Chevrolet Corvette C7.R stopped out on circuit just minutes before the halfway mark.

The Corvette Garcia shares with Jan Magnussen and Mike Rockenfeller had fought back from more than two laps down after a collision in the pitlane with the sister car only to run into fuel issues.

The #912 Porsche driven by Earl Bamber, Laurens Vanthoor and Mathieu Jaminet had also came back from an early delay when the front splitter needed replacing to hold second place just over a second behind the sister car on 12 hours.

The Risi Competizione Ferrari 488 GTE shared by James Calado, Alessandro Pier Guidi, Davidi Rigon and Miguel Molina was within two seconds of the pair of Porsches in third position.

The Riley Motorsports-run Mercedes-AMG GT3 driven by Jeroen Bleekemolen, Ben Keating, Luca Stolz and Felipe Fraga moved back into the lead of the GT Daytona class when Bryan Sellers stopped for fuel in the Paul Miller Racing Lamborghini Huracan GT3 just before the 12-hour mark.