The Manthey Porsche squad scored its seventh Nurburgring 24 Hours in the shortest-ever running of the famed German event, which was halted for 14-hours by fog.

With just 59 laps completed, the race was the shortest in the event's history, surpassing the previous record set in 1992.

It marks Porsche's 13th win in the race as a manufacturer, and a first for Estre, Christensen and Cairoli. Lars Kern was also registered as a fourth driver in the #911 car, but was withdrawn during the race.

The long red flag period overnight meant the race was effectively reduced to a three-and-a-half hour sprint, with the polesitting #1 Rowe Racing BMW M6 GT3 of Phillipp Eng leading the field back to green in what were still tricky conditions at 11.40am local time.

Maro Engel closely shadowed Eng at the wheel of the #4 HRT Mercedes-AMG GT3 during the early laps until he suffered a major crash at Tiergarten while trying to negotiate backmarkers, which granted Eng a comfortable lead at the head of the field.

However, a new regulation dictating minimum pitstop times according to stint length meant the #1 Rowe BMW dropped down the order when it came in for its first post-restart service, as it had made its previous stop shortly before the red flag, almost doubling its pitstop time.

This was a moot point in the end however, as the pole-sitting car later suffered an electronics glitch and Eng was forced to pull into the pits to retire. 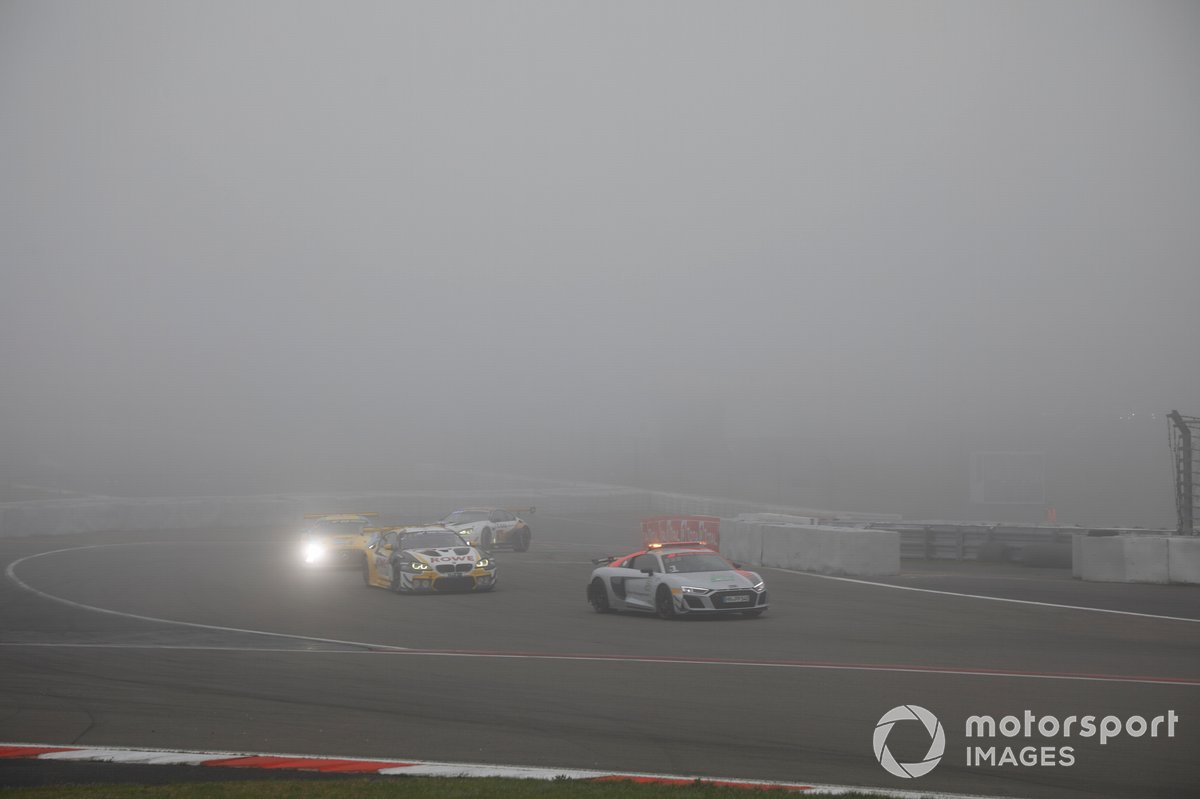 Restart in the fog

The Manthey Porsche of Christensen therefore took over the lead from the surviving #98 Rowe BMW of van der Linde, which made its second post-restart stop two laps earlier than the Porsche, putting the two cars on slightly diverging strategies for the remainder of the race.

Van der Linde cycled into the lead after Christensen handed over to Estre for the run to the flag, and was 28 seconds to the good when he made the car's final stop with a little under 50 minutes to go.

But a shorter final stop for Estre two laps later allowed the Frenchman to rejoin with 15 seconds in hand over the BMW, giving the 'Grello' Porsche a clear run to the flag.

The final podium spot went to the #7 GetSpeed Mercedes-AMG GT3 shared by Raffaele Marciello, Maximilian Gotz and Daniel Juncadella, after Marciello passed the #44 Falken Motorsports Porsche of Sven Muller on the penultimate lap of the race.

Marciello courted controversy earlier in the early laps after the restart when he punted the #11 Phoenix Racing Audi R8 LMS GT3 of Michele Beretta during a battle for position.

Beretta's team-mate Nicki Thiim wrote on Twitter: "The 'experts' call them the best GT drivers in the world. I tell you... you have no idea how far away you are. Good job R.Marciello."

Marciello responded: "I give my point of view before everyone is accuse me.

"[Beretta] lost the car already few corners before, almost crashed out @MiesChris + he was 10 sec off the pace, then he leave a gap open (while he is sliding). I go for it and close the door like if I’m not here."

"Luckily I don’t care and I don’t suffer about it but I’m getting so many insult. People should calm down and think twice before writing something." 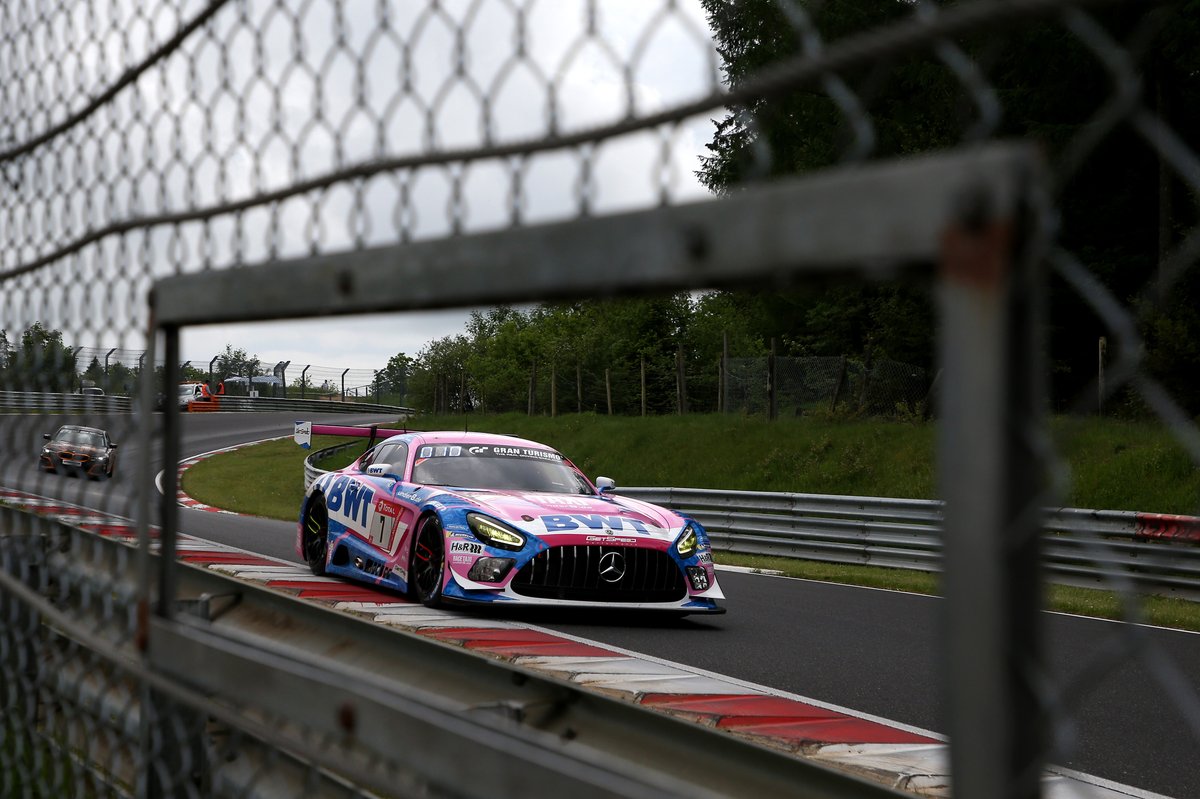 Responding to Thiim's post, fellow Audi driver Christopher Mies wrote: "Maybe emotions are still high but if you check the whole lap onboard from me and Raffaele behind Beretta, it’s actually insane he didn’t got off before.

"Ah forgot he did, kissed the wall at Breitscheid. Very unfair blocking and driving from him."

Audi lost another of its front-running cars when Kelvin van der Linde crashed the #29 Land Motorsport car with a little over an hour and a half to go, in an incident that also removed the #3 Rutronik Racing Porsche from contention.

That meant that the best of the Audis at the finish was the #2 Car Collection Motorsport car in fifth, with Nico Muller narrowly missing out on passing the #44 Porsche on the final lap.

Another BMW, the #20 Schubert Motorsport car, completed the top six ahead of the #8 GetSpeed Mercedes and the Pro-Am #23 Huber Motorsport Porsche. Falken's second Porsche, the #33 car, was the ninth and final car to finish on the lead lap.

Two top-10 runners were eliminated in the final hour when Augusto Farfus suddenly slowed at the wheel of the #77 BMW Junior Team M6 GT3, which resulted in Patrick Pilet's #31 Frikadelli Motorsport Porsche piling into the back of the Brazilian at speed.