It might have been a proven package, but the Jamie Campbell-Walter-driven Lister was not the favourite to win the 2002 FIA GT season-opener at Magny-Cours. Yet, despite amateur co-driver Nicolaus Springer losing a minute during his middle stint, that's exactly what it did, thanks to inspired driving and clever strategy

Laurence Pearce likes to tell me that I claimed an act of God would be required for his Lister team to win a race in the FIA GT Championship in 2002. It wasn't quite what I'd written in my Autosport season preview, but I was still left eating humble pie at the end of the opening race of the campaign at Magny-Cours.

Even though Pearce's memory is playing tricks with him, I had been pretty damning of the chances of a team that had claimed the championship two years previously and been a race winner the previous season. So I don't begrudge him the ammunition with which he taunts me to this day.

The victory for the Lister Storm GT driven by Jamie Campbell-Walter and Nicolaus Springer at what was then the home of the French Grand Prix in April 2002 was nothing short of a heist. They snatched the win from under the noses of the sleep-walking opposition, the all-conquering Larbre Competition Viper team included.

Lister had no business winning races in FIA GTs after pairing wealthy amateur Springer, who'd hardly distinguished himself in two previous campaigns with the team, alongside rising star Campbell-Walter. There were too many decent all-pro line-ups in the field for a gentleman driver who was three, four and sometimes more seconds off the pace to end up on the top step of the podium.

The absence of a strong driver pairing at Lister - Bobby Verdon-Roe was joined by Paul Knapfield in the second car - explained why I dismissed the team's victory credentials. That and a switch from the benchmark Michelin tyres to Dunlops for the new season.

Yet I was proved wrong at the first time of asking courtesy of a jaw-dropping performance from JCW, a tactical masterclass from the team and the Dunlop tyres of which I'd been so dismissive. 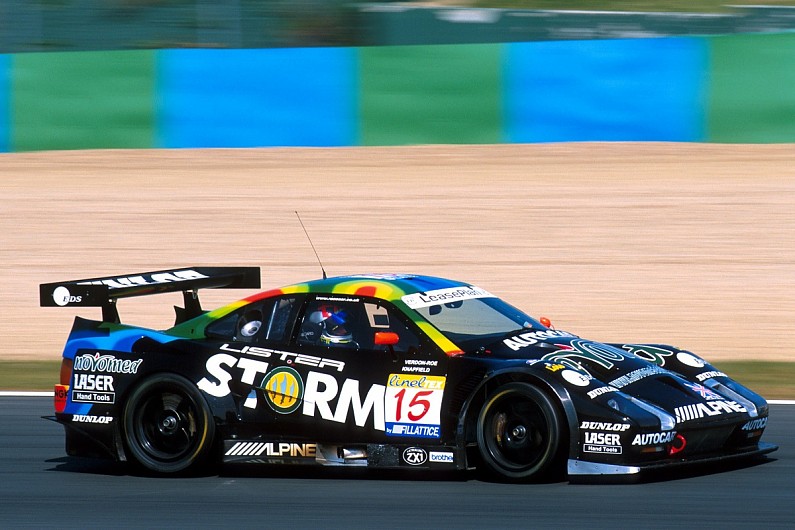 I didn't see it coming and nor did Lister's rivals. Truth be told, neither did anyone at the little British team from Leatherhead in Surrey.

"I was shocked, utterly and completely shocked," recalls Campbell-Walter. "And it's still shocking today when I think back. Laurence might tell you he was confident of winning races with Nic, but that's bullshit."

That much is clear when Pearce recounts the story of how he broke the news to JCW that he'd be driving with Springer that season.

"I was out there pushing like a motherf**ker, taking far too many risks in traffic and the fast corners" Jamie Campbell-Walter

"I asked him if he wanted the bad news or the really bad news," recalls Pearce. "I told him that the bad news is that we're gonna be on Dunlops. Jamie goes, 'Oh no, they're shit'.

"Then I said that 'the really bad news is you're driving with Springer'."

Pearce did have a snippet of good news for Campbell-Walter: "I told him I was going to double his wages."

Campbell-Walter believed that Lister's race-winning days were over, though he did entertain hopes that he and his new team-mate might sneak into the top three on occasion. A podium was what JCW thought he was racing for when he climbed back into his Jaguar-engined Storm after Springer completed a short 40-minute stint in the middle of the three hours at Magny-Cours.

JCW (below, left with Springer, middle and Verdon-Roe) had handed over to his team-mate at the top of the first hour with a lead of 40 seconds, only for the German publishing heir to lose approximately a minute. It would have been more had Lister not saved 10 or so seconds by giving Springer new left-side tyres only at his stop. 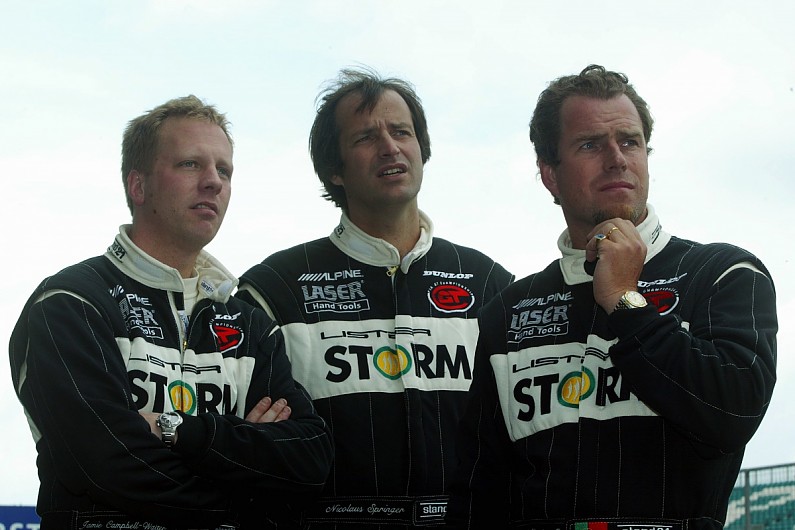 "I was out there pushing like a motherf**ker, taking far too many risks in traffic and the fast corners," recalls Campbell-Walter. "Then Laurence comes on the radio and tells me that for the next eight laps I've got to do a certain time, which I remember being not far off my pole lap.

"I said to Laurence, 'And? What am I racing for here? A podium?' He comes back, 'No son, I'm only talking about f**king winning!'"

Campbell-Walter's task was to build a 50s gap before the additional pitstop required as a result of Springer's short stint. That would allow him to hang onto the lead after taking a splash of fuel. A tyre change was never on the agenda, because that would have dropped him behind the chasing Carsport Holland Chrysler Viper GTS-R with Mike Hezemans at the wheel.

The Storm came out of the pits 15s to the good. Lister's smash and grab was complete.

Hezemans and his team-mate, Anthony Kumpen, were shell shocked after the race, as were the lead Larbre crew of Christophe Bouchut and David Terrien. They'd both been caught napping.

Hezemans and Kumpen (below) should have won that day in France, even with an early stop-go for passing under yellows. Their Viper had an edge over the Larbre car, which wasn't running the latest-spec engine and gearbox developed for the American muscle car. When the Carsport duo established themselves ahead of the French team, they thought they were home and dry.

Kumpen admitted that as soon as Springer pitted, he assumed the Lister was out of the equation. It was a fair assumption given the extra stop the Lister was going to have to make. On the evidence of previous seasons, new tyres would be required as well as fuel. 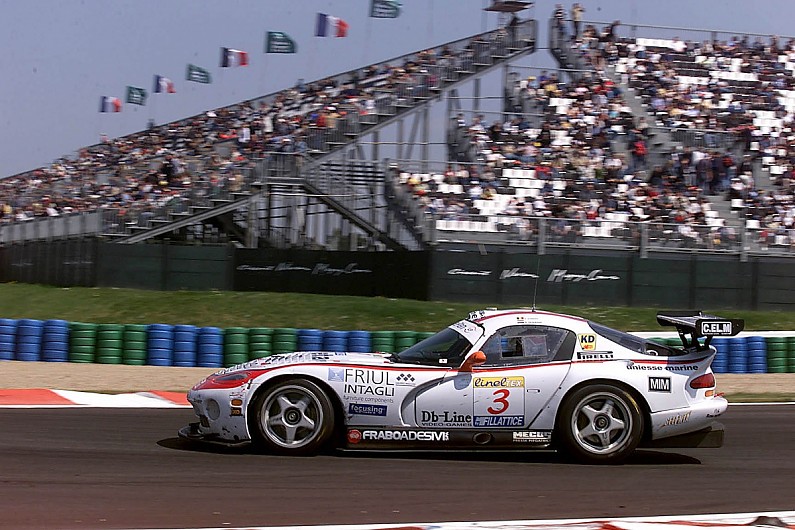 "We were only watching the Bouchut car," said Kumpen, who'd moved ahead of Terrien just before half distance despite the stop-go. "I could have lapped one or two seconds faster, but I thought there was no need."

That might have been the case had the Lister been on previous-generation Dunlops.

"The Dunlops in the years before had been known for being good in qualifying, but they weren't as consistent as the Michelins on raceday," explains Campbell-Walter. "But over the winter we did a comprehensive development programme and came up with a tyre specifically for the Lister, which was at least as good as the Michelin in terms of durability.

"You've got to hand it to Dunlop; they were a big part of that victory. At that stage we didn't know if the tyres could do an hour and 20 minutes with me pushing like hell. Even after my stop, the tyre stayed good and I was still able to pump in the lap times to increase the gap. We ended up winning by 22s."

Lister's unusual tactics were formulated in the knowledge that Springer couldn't exploit the extra bite of fresh rubber, so why give him a full set of tyres?

The new-found durability of the Dunlop also allowed Lister to save those vital seconds in the pits when Springer took over. The right-hand-side tyres fitted to the Storm at the start of the race completed one hour and 40 minutes. Lister's unusual tactics were formulated in the knowledge that Springer couldn't exploit the extra bite of fresh rubber, so why give him a full set of tyres?

Campbell-Walter and Springer would win again over the course of the 10-round FIA GT season in 2002. They triumphed at Brno in May when Campbell-Walter ducked down the inside of race leader Fabrizio Gollin into the first corner at the start of final lap just as the second Carsport Holland Viper started to stutter out of fuel.

Four months later at Enna, Lister scored its third victory of the season when Hezemans and Kumpen again missed out. This time it was the rear screen popping out over the severe kerbs of the Sicilian speedbowl's multiple chicanes that did for the Carsport duo's chances. 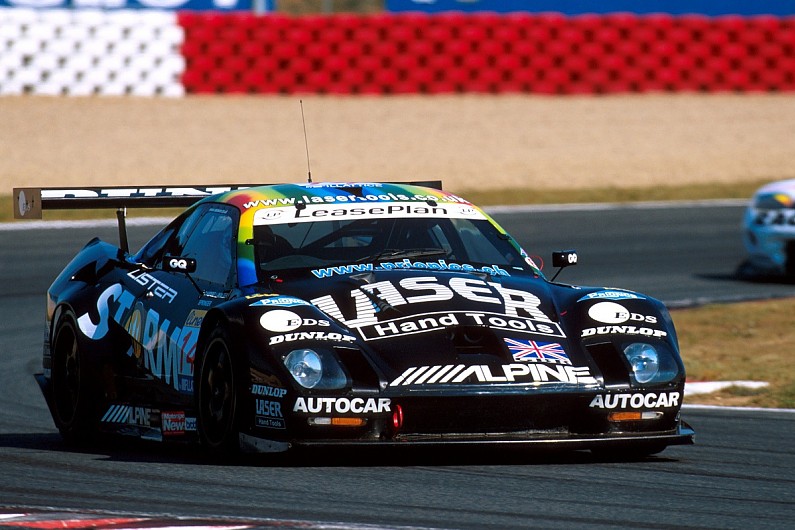 There were a couple more podiums for Campbell-Walter and Springer, at Oschersleben and Estoril, so much so that they missed out on the championship by a scant two and a half points. And that was despite only picking up a smattering of points at the six and 12-hour cut-offs at the Spa 24 Hours.

Campbell-Walter and Springer, who were joined for the double-points round by Andy Wallace and Eric van de Poele, were running third with four hours to go when a driveshaft failed. The four points they lost as a result would have been more than enough to give the Lister pairing the championship.

The galling thing for Pearce is that the failure happened as Campbell-Walter was coming out of the old Bus Stop chicane. With no chance of completing a full lap of the circuit, he illegally ducked into the pits in the break in the wall between the old and new pitlanes either side of hairpin at La Source.

"He couldn't have made it around the lap, so he ducked into the pits and they disqualified us immediately," he recalls. "It was only 10 minutes to change a driveshaft on that car."

Bouchut ended up retaining his FIA GT title in 2002, which was what I had predicted at the start of the season. The act of God comment with which Pearce likes to mock me was actually made in reference to Larbre. It would take divine intervention, I wrote, to prevent the French team from winning the championship.

But I'm not sure Pearce and Campbell-Walter needed any higher authority on their side that day at Magny-Cours. They united to form an unstopped force that proved me well and truly wrong. 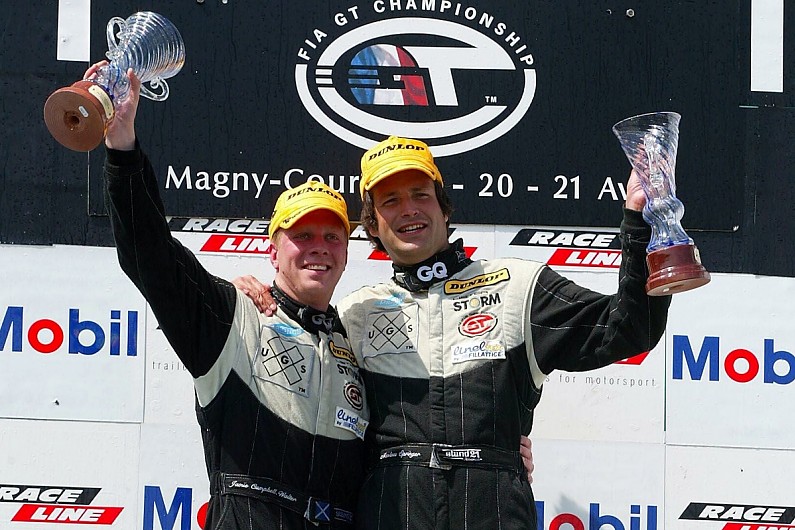