Aside from the instantly identifiable Newcastle United livery adorning the Lister Storm team at Le Mans in 1996, it's fair to say the North East hasn't had the most overt presence in international motorsport.

Compared to the rest of England and even Scotland, it's not easy to name more than a couple of professional drivers heralding from the Tyne, so when two Geordies teamed up to score GT2 class honours in the last two rounds of the 2006 Le Mans Series at Donington Park and Jarama, it was already a statistically unlikely occurrence.

But what made Warren Hughes and Rob Bell's triumph even more unusual was that it came in the unwieldy Panoz Esperante GT-LM, a car that had not scored any points in the three rounds that preceded Donington and, similarly to the Team LNT-run TVR Hughes had been lumbered with the previous year, wasn't exactly driver-friendly.

"It was an inherently difficult car, it was not well-engineered in its design," says Hughes (pictured below in 2005), a three-time British Touring Car Championship race-winner with MG between 2001 and '03, who had won the LMP2 class at Le Mans in 2005.

"I don't know if on Michelins it would have been a better proposition, but on Pirelli tyres it was a bucking bronco. It would turn in, but the rear had its own ideas on what it wanted to do and it would hop, skip and jump randomly. 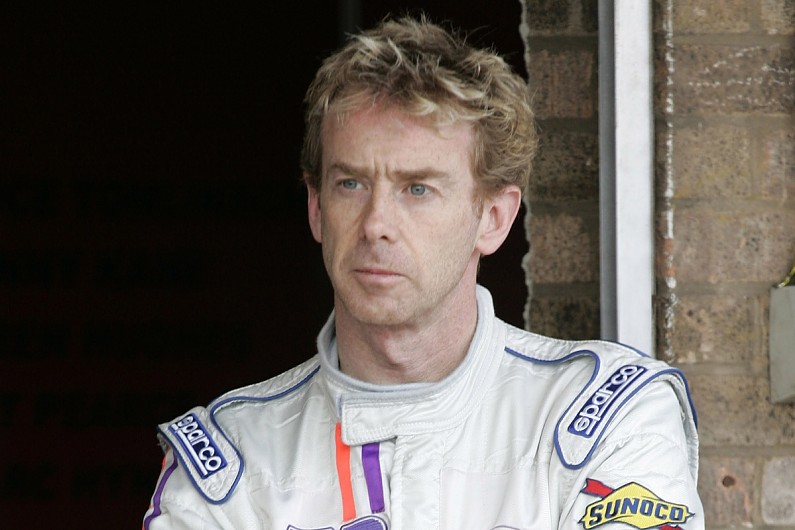 "Traction control would just trigger when you didn't want it to and wouldn't catch you when you wanted it to, so it was just a bit of a mess. It was like a sterioded version of the TVR in lots of ways, but with a big mechanical imbalance thrown in.

"The car had a very narrow window set-up wise where it was less of a pig than normal. Whenever we could tune into that tiny little window, we tended to get a decent result but it was really hard to keep it in that window."

The car had not been without its successes elsewhere. First campaigned by the Panoz factory team in the American Le Mans Series in 2004, the Esperante had won its first race at Road Atlanta in 2005 with Bill Auberlen and Robin Liddell and finished second at Laguna Seca, but struggled to match the dominance of Porsche over the course of the season.

"The joke was always that there was the two Geordies and then there was a translator in the team and everybody else spoke their own language - probably Yorkshire, which I didn't understand a word of either!" Rob Bell

The programme was taken over by Multimatic in 2006, and Scott Maxwell, David Brabham and Sebastien Bourdais combined to win the 12 Hours of Sebring (pictured below), but it was to be the team's only victory of that season. Meanwhile, LNT had scored a surprise class victory at Le Mans in a race of unusually high attrition, with team boss Lawrence Tomlinson joined by Richard Dean and Tom Kimber-Smith.

All the same, the car was no match for the Porsches and Ferraris in the LMS that season - "it wasn't until the year after when I drove the Ferrari that I thought 'oh my God, that was a pig!'" chuckles Bell - and required something of a unique style.

"Lots of deep breaths, blind faith, hang on - seat of your pants job I think," Bell recalls. "It was a bit unpredictable, which is a racing driver's nightmare.

"If you've got an oversteery car but you know it's going to oversteer, that's fine. If you've got something that does something different every other lap, that's the killer." 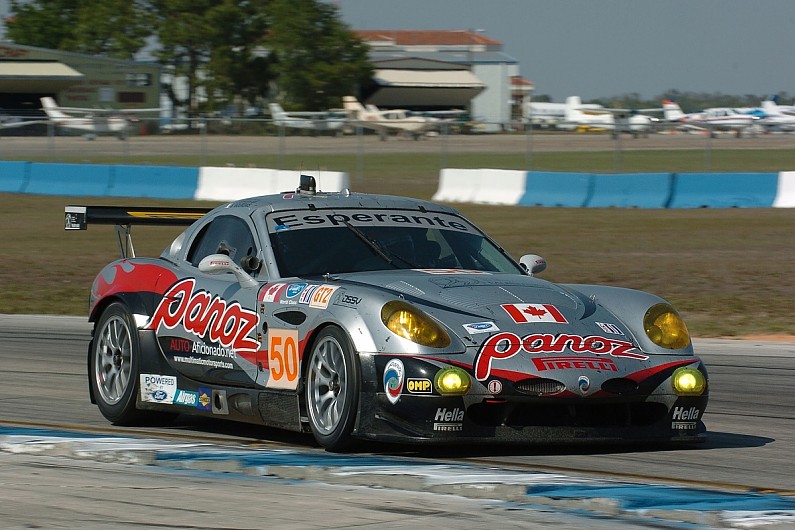 Bell, now a stalwart McLaren factory driver who won the 2016 Blancpain Endurance Series title, as well as back-to-back Le Mans Series GT2 titles with Virgo Motorsport in 2007 and '08, was then a GT rookie with only one previous race under his belt prior to the season. That had come at the Nurburgring, when the Formula Renault V6 Eurocup graduate had combined with Darren Turner to win the GT1 class in a Cirtek Aston Martin DBR9.

By his own admission, he was still "very naive" in 2006 and looked up to his more experienced team-mate for guidance.

"The opportunity to drive with Warren was brilliant for me because I knew very little about the whole GT world," says Bell (pictured below).

"Obviously both coming from the North East, I'd followed his career and thought of him many times in my career growing up, so it was a brilliant opportunity to drive with an established name who had been around a good while.

"He was a benchmark, it wasn't necessarily that he was another Geordie, but actually it was quite nice. The joke was always that there was the two Geordies and then there was a translator in the team and everybody else spoke their own language - probably Yorkshire, which I didn't understand a word of either! I learned a lot from Warren that year."

Sure enough, Bell was soon pushing Hughes hard, and forced the older driver into questioning his own level of performance.

"I was there as the paid pro and my expectation going into that year was he would be a good level second driver, but that absolutely wasn't the case," says Hughes, now an established part of McLaren's Driver Development Programme coaching set-up. 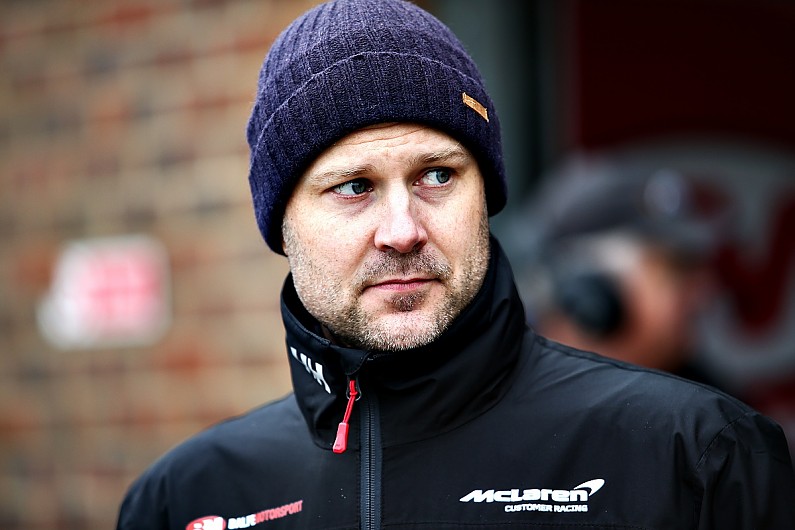 "He was absolutely right with me [on pace] and in some respects that put me under pressure. It's easy to think in hindsight 'Rob is a proven driver' but at that time he wasn't, he was creating his reputation and it took me by surprise initially.

"Early in the season I'd made a couple of mistakes. I didn't know much about Rob at the time and I think subconsciously I thought 'maybe I'm not performing at the level that I need to be', so I started pushing too hard and I ended up running into the back of a slow Ferrari at Spa.

"There's not that many of us from this part of the world that have reached a decent level in motorsport. I don't think we realised at the time the significance of the achievement" Warren Hughes

"It took me those couple of races early in the season to realise, 'he's actually operating at a really good level and I need to stop being influenced by that'. I had to reset myself and just accept Rob's pace from that point on, so it was a really strong team by the second half of that year."

There were still problems with the tyres - Bell qualified third at the Nurburgring, less than a tenth off the polesitting Ferrari, but at the end of Hughes' first stint on the same set of rubber, they had dropped off by "seven or eight seconds per lap" - but the team's prospects were transformed by a fuel break introduced at Donington.

This "saving grace", as Hughes puts it, allowed the car to complete the 1000km on four stops instead of five.

"That did make a big difference to us," admits Hughes. "That's what put us from being a top four, top five to a potentially race-winning combination."

But Bell argues that it was only part of the picture that resulted in the Panoz finishing one lap clear of the rest, headed by the Autorlando Sport Porsche shared by Joel Camathias and factory driver Marc Lieb.

"We were as close to the pace as we'd been, within a second and then we had a perfect run, no damage, no problems, pitstops were fantastic, and I think other people may not have had such a clean run," he says. 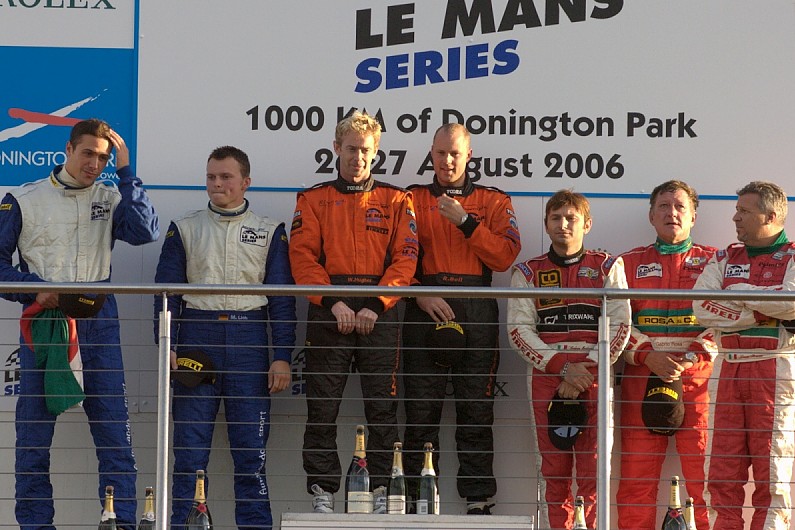 "The two Ferraris, [Tim] Sugden and [Andrea] Montermini were first and second until they hit each other and let me past, so a few things happened but we did our bit."

That breakthrough win was followed by another in the Jarama season finale, the points accrued from the two events enough to vault LNT up to third in GT2 and the last guaranteed Le Mans place for 2007. For Bell, it was a key milestone in his journey towards becoming a professional the following year, but came at the expense of the Virgo Motorsport team he would drive for in 2007.

"They would have definitely noticed me because I was the bugger who knocked them out of their potential Le Mans slot!" chuckles Bell. "Especially Donington, but those races definitely put me on the map."

Neither can recall another all-Geordie line-up having success on the international stage.

"I wouldn't have thought so, there's not that many of us from this part of the world that have reached a decent level in motorsport," says Hughes. "I don't think we realised at the time the significance of the achievement, or the level we were operating at.

"You just get on and do the job that's in front of you at the time but when you look back there was some strong opposition, we were beating Ferrari factory drivers, Porsche had factory drivers in there and here's two Geordies in a bucking bronco orange shitbox which managed to beat them a couple of times." 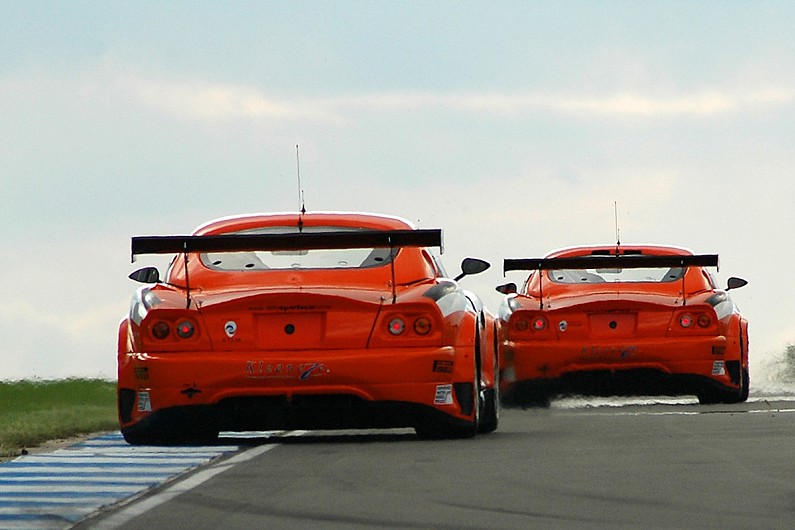