It's not often that victory by a factory Porsche team can be considered a giant-killing performance, but the German marque's success in the 2015 Petit Le Mans is an exception.

Its 911 RSR not only won the hard-fought GTLM class, it beat all the Daytona Prototype machines to take the overall win. And it did it on raw pace.

The CORE-run Porsches showed they were competitive in the appallingly wet conditions that dogged the 18th edition of the Road Atlanta event in qualifying. Earl Bamber and Nick Tandy battled for class pole and spots in the top five overall.

"In qualifying it was a fight between me and Earl," recalls 2015 Le Mans 24 Hour winner Tandy, who was set to share the #911 entry with Patrick Pilet and Richard Lietz.

"We were getting quicker and quicker. Earl went fastest and then crashed at the very next corner and ended the session."

Despite their times being good enough for fourth and fifth overall in the IMSA United SportsCar Championship finale, the two Porsches were set to start behind the prototypes even before both picked up penalties. 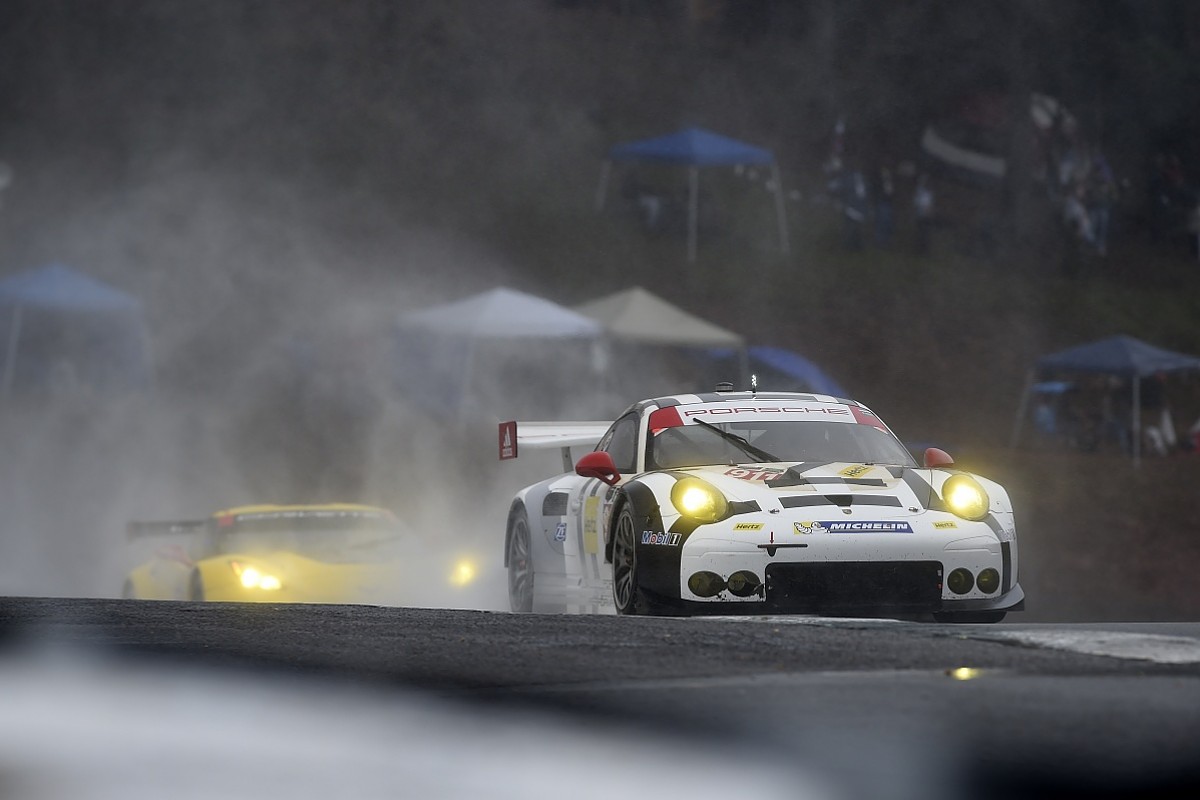 The #912 car Bamber shared with Jorg Bergmeister and Frederic Makowiecki was penalised for being worked on under parc ferme conditions following Bamber's crash, while the sister 911 was put to the back when it failed the rideheight test.

"When it got towards the end of the race and it was clear the conditions were staying the same and we had the quickest car, we thought we could win it" Nick Tandy

"Our car failed scrutineering because the splitter had picked up the water and the wooden skid block had swelled," explains Tandy.

"We had to start from the back, but it was supposed to be a 10-hour race and, looking at the conditions, it didn't make any difference."

Tandy started the race, quickly carved through the GTLM field and attacked the prototypes. Even during his first stint it was clear the car could compete for a top-three spot overall.

"That set the tone," he says. "We were better than the prototypes under braking, on traction, and were so much quicker through the slow corners. It was only in the high-speed stuff they were fast."

The 911 was still rear-engined in 2015 and that helped with traction but, as is often the case when you delve deeper in motorsport, a key reason for the pace was related to tyres.

At that time the GTLM squads were allowed to develop bespoke wet-weather rubber, unlike the prototype runners, which had 'off-the-shelf' Continental tyres. 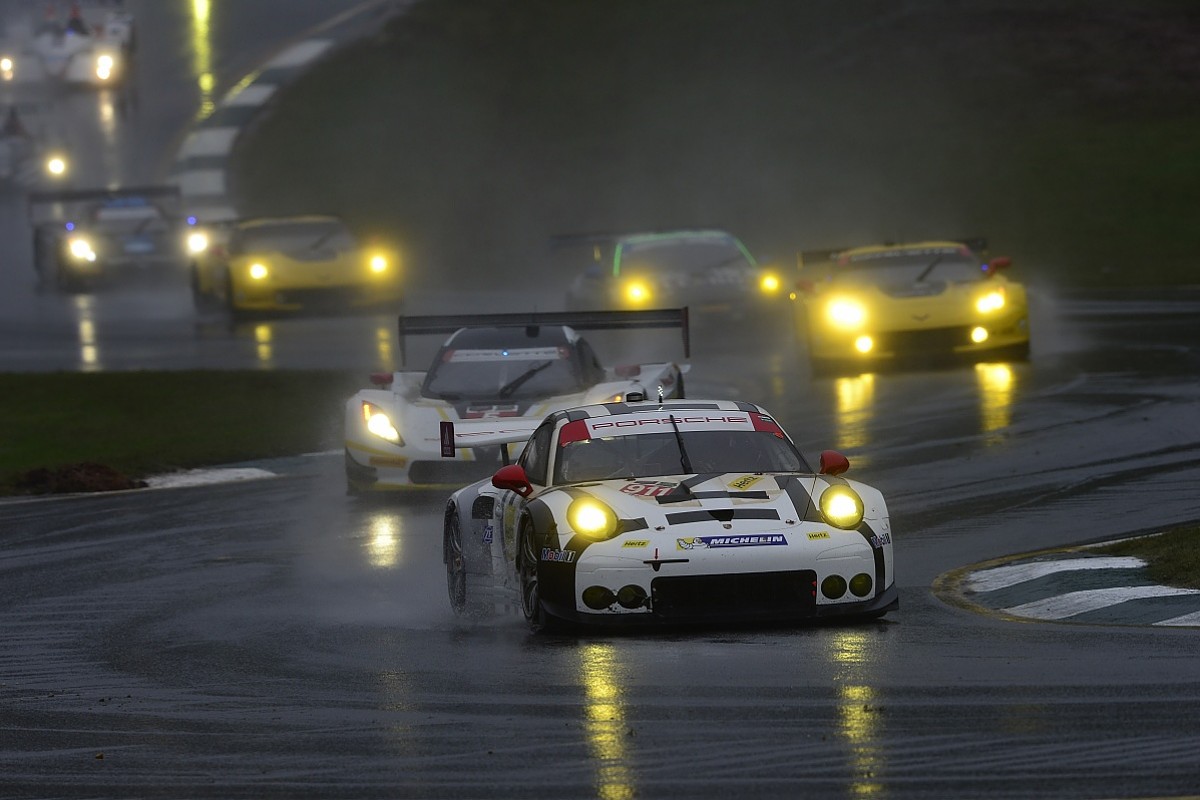 "That year we'd done a lot of work with Michelin and had our own Porsche-specific wet tyre," says Tandy.

"All the GTLM teams had tyres for their own cars and at that track in those conditions all the GTLM cars had an advantage. And the Porsche was particularly quick.

"Most of the prototype drivers were OK [to battle with] because everyone was in their own race. We weren't battling the prototypes, we were racing for the GTLM championship, so they didn't fight too much."

A bigger problem was the full-course caution procedure, which was required a lot during the race thanks to all the incidents in the challenging conditions.

"What was hard was that, every time there was a safety car period the prototypes were allowed to pit first," says Tandy.

"So we'd be slow behind the safety car before we could come in for our stops and we'd drop behind all the prototypes again. There was a big bunch of GTLMs among the prototypes.

"It was all about keeping the car on track while negotiating the slower prototypes, which were quicker on the straights. Every time there was a caution we had to do it again. It was frustrating, but our main concern was to win the championship."

Although the focus was on securing the GTLM drivers' crown for Pilet - Tandy having missed the Long Beach and Laguna Seca rounds - the constructors' title for Porsche and the teams' laurels for Porsche North America, Tandy does admit that the overall classification started to come into his mind in the closing stages. 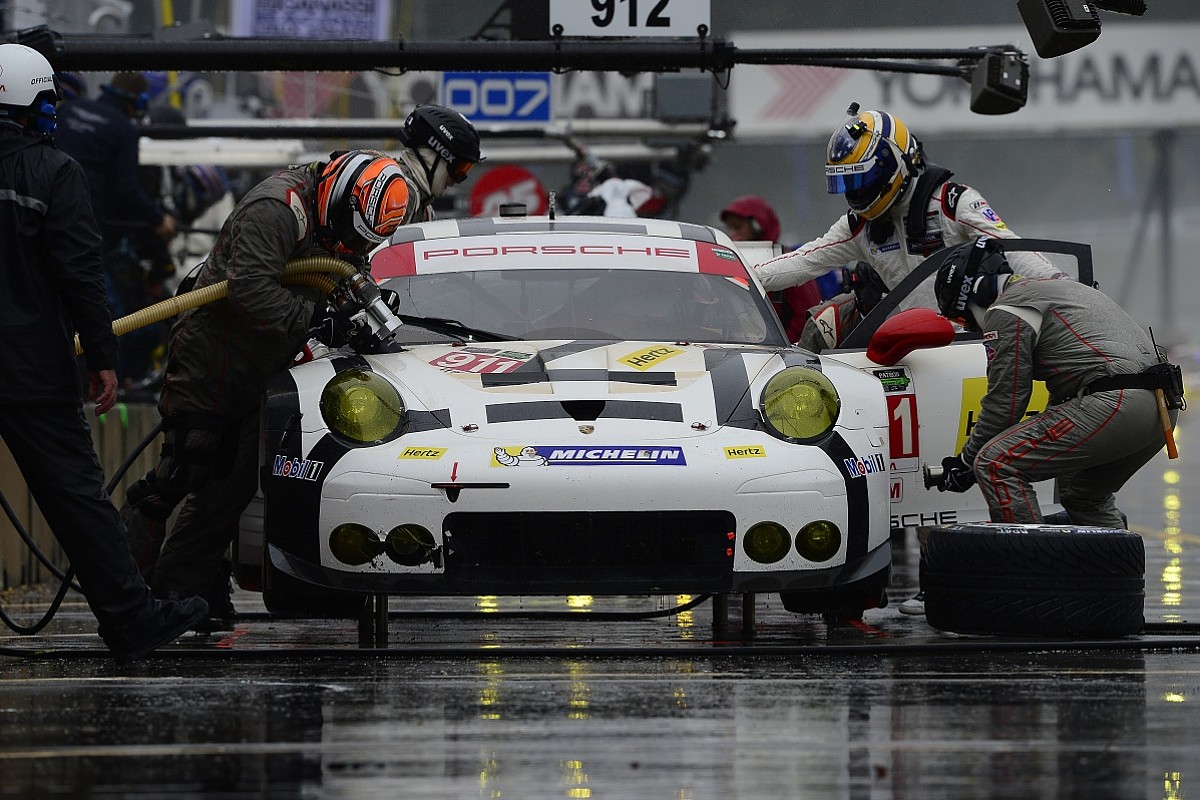 "When it got towards the end of the race and it was clear the conditions were staying the same and we had the quickest car, we thought we could win it," says Tandy, who climbed back aboard for the final stint.

"I knew it could be stopped at any point so I really went for it at the final restart and managed to go through a bunch of them."

Tandy then overtook Eric Curran's Action Express Coyote-Chevrolet Corvette DP to move back to the front.

"Richard felt a bit awkward on the podium. But, as I said to him, he did the practice sessions, he helped set up the car and he was part of the team" Nick Tandy

"It was probably the easiest pass of the whole race!" he says. "I'd stayed close down the back straight, got closer under braking for Turn 10 [the left-right chicane], then got an undercut and better traction on the exit to drive past up the hill."

The race was finally curtailed just before the eight-hour mark, giving Porsche the victory by 5.5 seconds over the leading BMW Z4 GTLM entry. Third went to the Action Express Coyote-Chevy of Prototype champions Joao Barbosa and Christian Fittipaldi, sharing with Sebastien Bourdais.

Reluctantly joining Tandy and Pilet on the podium was Lietz (below left), who had ended up not driving during the race.

"There'd been a red flag [in the sixth hour] when they'd tried to get rid of the water," explains Tandy. "That gave the chance for me and Patrick to have a break so we were capable of doing the rest of the race. We also had the experience of the conditions. 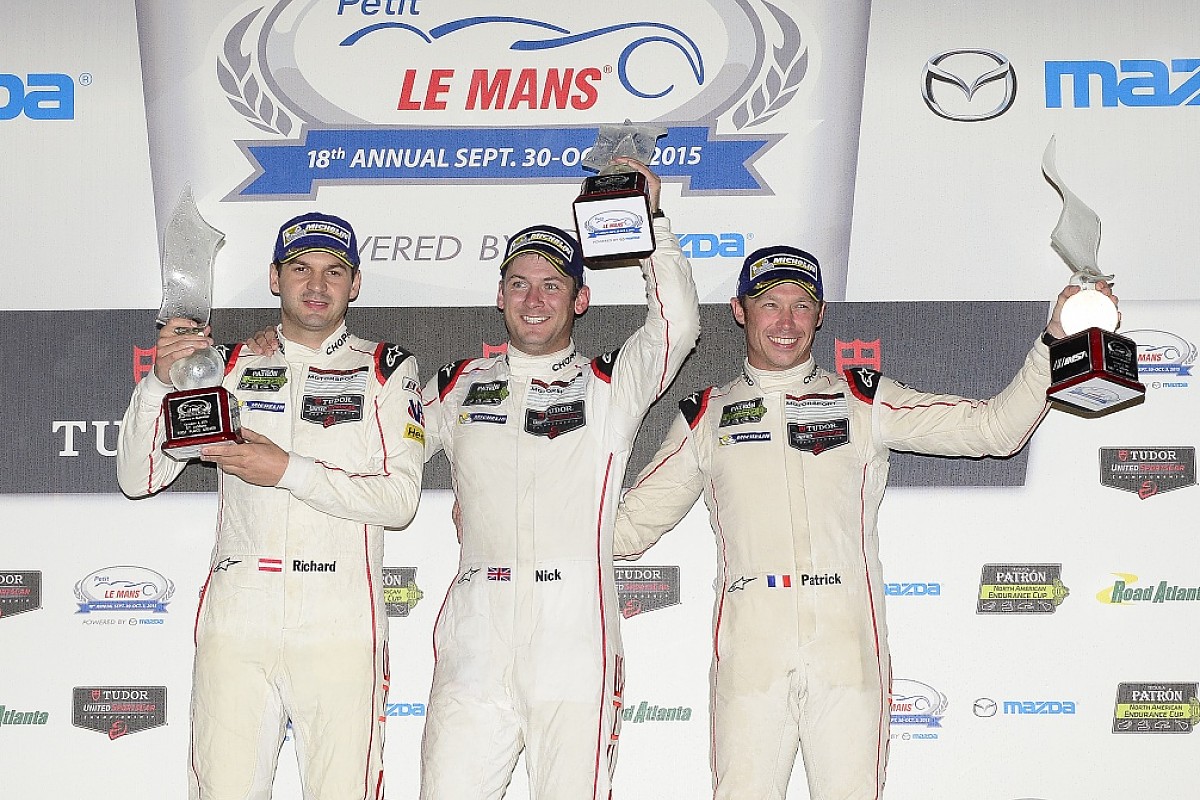 "Richard was fully on board with the decision, but said he felt a bit awkward on the podium. But, as I said to him, he did the practice sessions, he helped set up the car and he was part of the team.

"It was just one of those faultless races. Patrick did his usual excellent job and it'll always be a weekend I'll look back on with good memories."

So how does it compare to the more famous victory he scored at Le Mans that year in the LMP1 919 with Bamber and Nico Hulkenberg?

"I think I had more input in the result at Petit," says Tandy. "At Le Mans there were times when I felt I really helped the result, but at Atlanta I drove most of the race. I didn't drive any better, but my influence was greater.

"The concentration level in those conditions was unbelievable. It wasn't twice as much as in the dry, it was five times because you were always on the verge of crashing."

As well as being a giant-killing performance, the result also meant that Porsche achieved its goal of taking all three titles on offer in GTLM. And Tandy thinks that Petit race contributed to a regulation change too.

"After that race IMSA changed the rules on wet tyres in GTLM," he says. "There are more restrictions on developing the tyres now, so it's unlikely to happen again." 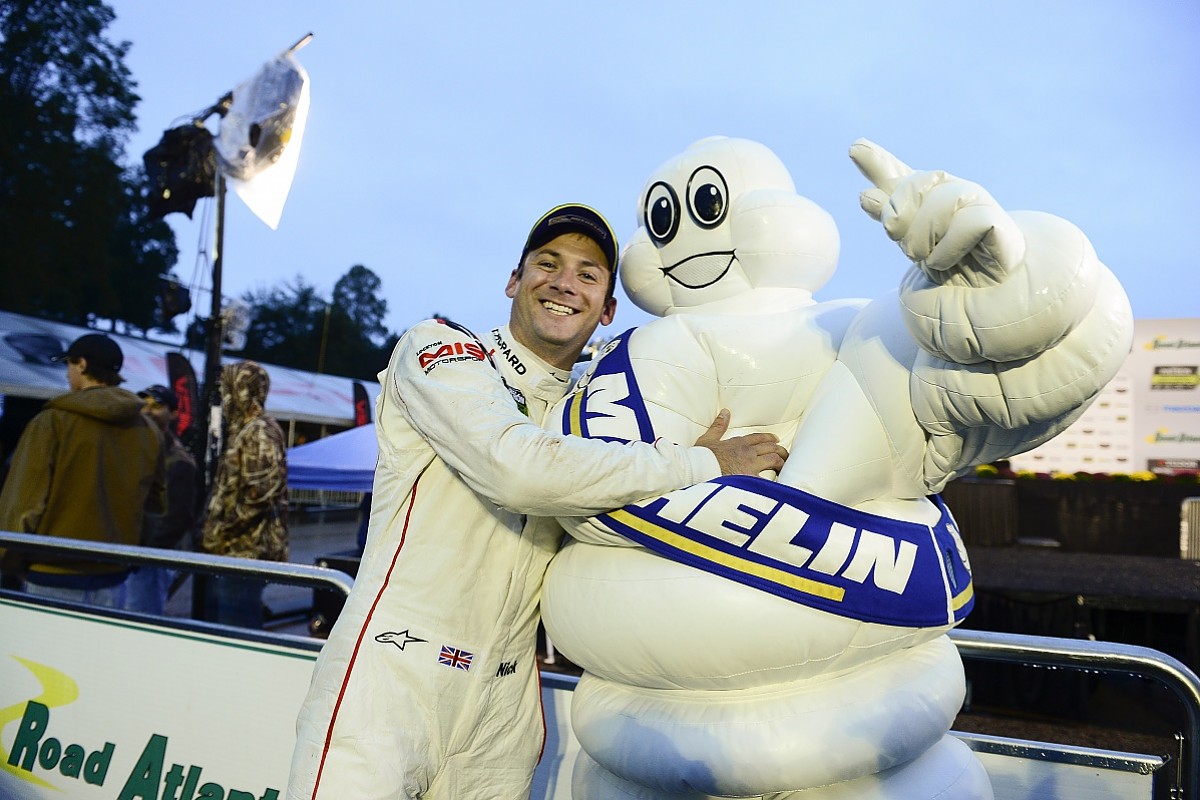