Sebastien Loeb claimed his fourth Race of Champions victory on the event’s first visit to Sweden, beating Sebastian Vettel in the best of four final.

Loeb came through a thrilling semi-final encounter with Ekstrom to make the final, winning a narrowly fought third race to join Vettel, who defeated nine-time Le Mans winner Tom Kristensen in the other semi, in the winner-takes-all bout.

The nine-time World Rally champion, who secured his 80th WRC victory on last month’s Monte Carlo Rally, edged Vettel in a competitive opening heat in the final aboard the Polaris RZR after the four-time Formula 1 world champion hit the wall exiting the final turn on lap one.

Loeb then made it 2-0 with victory in the second heat, a closer affair in which Vettel held a narrow first-lap advantage before dropping time on the second lap.

Vettel then forced a decider after a rare mistake from Loeb in the third heat; the Frenchman backed his RX2e electric rallycross car into the snowbank at the start of the second lap, allowing Vettel - who earlier clipped the wall under the bridge - an easy run to the flag.

The final duel, back in the Polaris, went the way of Loeb to the tune of just over eight-tenths of a second.

For the first time in ROC history, the event was held in the norther territory of Pitea on the shores of the Baltic Sea, offering a myriad of challenges to the 18 drivers taking part, many of whom had limited to zero experience of racing on snow and ice.

Colton Herta and Helio Castroneves kicked off proceedings in the first of two preliminary bouts before the round of 16, using the full configuration of the circuit, which had been reduced in length for the Nations Cup due to warming temperatures.

Herta and Chadwick then went head-to-head with the IndyCar driver making the quarter finals after Chadwick stuck her RX2e machine into a snowbank late on in the second lap.

The draw was split between traditional circuit racers on one side with off-road drivers occupying the second half. 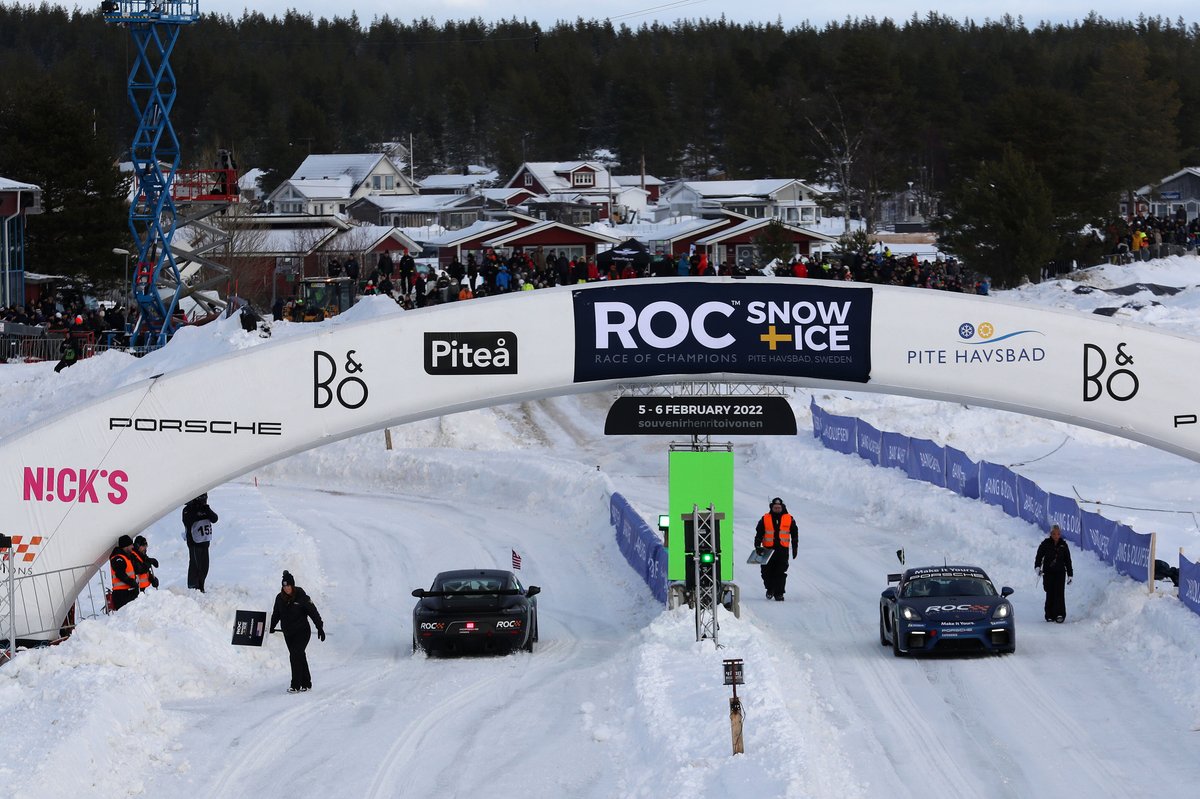 Making the quarters in the circuit racer half of the draw was NASCAR legend Jimmie Johnson, who prevailed in his round of 16 battle with double F1 world champion Mika Hakkinen, while four-time F1 world champion Sebastian Vettel came out on top in his duel with W Series driver Emma Kimilainen.

The pick of the heats in the quarters was saved for the last as nine-time Le Mans 24 Hours winner Tom Kristensen edged out two-time ROC winner David Coulthard by just four-tenths of a second. Coulthard was left to rue a slight brush with a snowbank on the opening lap and came up just short despite a second-lap charge.

In the off-road half of the draw, Hyundai WRC driver Oliver Solberg backed up his Nations Cup victory secured with his father Petter on Saturday by knocking out 2019 ROC winner Benito Guerra in his round of 16 heat.

Sebastien Loeb beat long-time WRC and World RX rival Petter Solberg to make the quarters, while a jump-start cost Didier Auriol a chance at a fifth ROC title against Mattias Ekstrom. Four-time World RX champion Johan Kristoffersson also made the quarters, coming out on top in his fight with Timmy Hansen, who ploughed through a snowbank on the final lap, briefly ending up on Kristoffersson’s side of the track.

The quarter-finals were run over two runs with the cumulative times determining which driver progressed to the semis.

Vettel was pitted against Herta, with the pair taking a heat win each, but the former prevailed on time, while Kristensen did likewise with Johnson over two runs.

Loeb also made the semis after a thrilling dogfight with Solberg Jr; the two rally drivers set an identical time in the second heat to the nearest thousandth of a second.

The best two-run battle was left for World Rallycross champions Kristoffersson and Ekstrom, with the latter winning by just under half a second.

In the electric RX2e car, Kristoffersson just edged the first heat by 0.010s in an epic scrap, despite suffering a wobble on acceleration over the final bridge but a small mistake in the second race at the wheel of the Polaris SSV allowed Ekstrom to prevail.

The Swede couldn’t quite match the pace of fellow rallycross and Dakar Rally rival Loeb in the semi-finals, with the pair needing all three races to determine the winner.

Loeb took the opener despite a major slide at the final corner on lap one, while Ekstrom fought back to win the second heat in the Supercar Lites. Loeb then kept it clean to assure his place in the final.

Vettel’s progression to the final was a much easier affair, as a technical problem for Kristensen’s RX2e machine forced the Dane to stop on track.