The Japanese Carlin ace, who has an infinitesimally tiny chance of grabbing the title this weekend, ended up a massive 0.228 seconds clear of his closest rival on the 63-second lap of the Bahrain Outer Circuit as he headed free practice for the fifth time this season.

Like all the other leading contenders, Tsunoda set his quickest lap on his opening run, and there were no significant changes to the order over the last 25 minutes of the session.

But while it was a dull period for clock watchers, it was immensely entertaining viewing.

The first session for single-seaters on the Bahrain Outer Circuit highlighted how bumpy the sweeping corners from Turns 4 to 9 are, in particular the sweeping downhill right-hander of Turn 6 - nearly everyone got massively out of shape through this corner, which doubles as the braking zone for the tighter left-handed Turn 7.

Carlin, perhaps benefiting from all its years of F3 experience at the high-speed Thruxton, ended the session with a 1-2, with Tsunoda's fellow Red Bull protege Jehan Daruvala completing a clean sweep for the team.

Luca Ghiotto, so often the man to beat on the full-fat Bahrain grand prix circuit, seems to be on form on this layout too, and he went third quickest in his Hitech Grand Prix car.

Another of the outside title contenders, 2021 Haas F1 driver Nikita Mazepin, was fifth for Hitech, ahead of the ART Grand Prix car of Ferrari junior Marcus Armstrong. 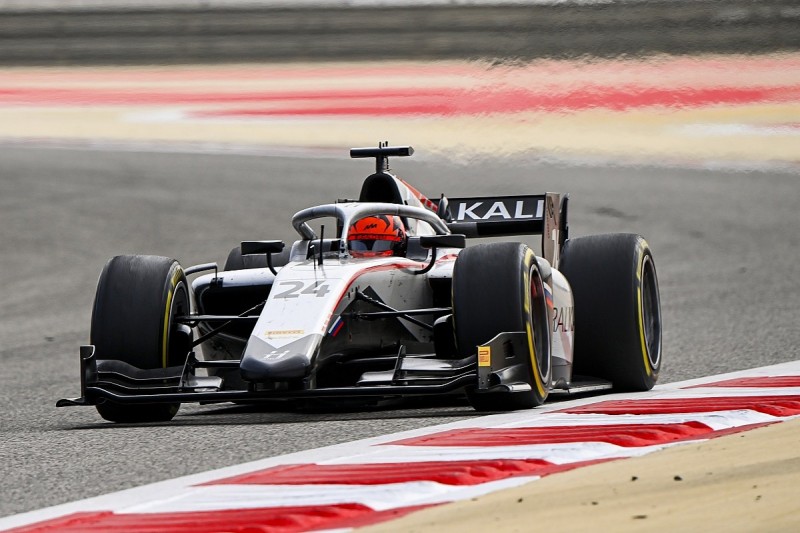 Louis Deletraz, spurned by Haas as replacement for Romain Grosjean this weekend to the benefit of fellow reserve Pietro Fittipaldi, was ninth in his Charouz Racing System car.

The Swiss's session featured some aggressive wheel-to-wheel battling with Dan Ticktum, who finished up 11th in his DAMS machine.

The final slot in the top 10 was taken by another title longshot, Prema-run Ferrari protege Robert Shwartzman.

Ralph Boschung, Williams call-up Jack Aitken's replacement at Campos Racing, did a good job to take 13th in his first action for over 12 months.

The session was red-flagged with four minutes remaining and not restarted after Artem Markelov's HWA Racelab car stopped by the pitwall on the grid with smoke billowing from the rear end.