While Tsunoda whisked his Carlin car to the four points on offer for pole, championship leader Mick Schumacher and current runner-up Callum Ilott struggled to 18th and ninth respectively.

To claim the championship, Tsunoda, like front-row partner Nikita Mazepin, needs to win both races on the Bahrain outer circuit, with Schumacher failing to score and Ilott marooned in the lower top-10 positions.

On such a short layout, the usual F2 qualifying protocol of push-lap, cooldown, push-lap on each of the two sets of Pirelli tyres extended to three push-laps, with cooldowns in between.

Mazepin had his Hitech Grand Prix machine at the top of the times after the second hot laps on the first set of Pirellis, but Tsunoda eclipsed that on his third flier to move 0.122 seconds ahead.

Prema Racing pair Schumacher and Robert Shwartzman went out late on their first sets of tyres, joining the circuit when the remainder of the 20-car field were returning to the pits.

But that ploy was stymied slightly by HWA Racelab sending its pair out early on their second sets, causing Schumacher to be baulked.

As the second runs started, Ilott was down in eighth and Schumacher was 17th, but like the majority of the field they would be hampered by two red flags, one of which was triggered by a Schumacher collision.

Shwartzman had just moved up to fourth place on the first push-laps on the second set of tyres when Luca Ghiotto spun at Turn 2, coming to rest in the gravel on the inside of Turn 3 and causing the first stoppage.

With four minutes on the clock, that theoretically left time for most drivers to complete two push-laps, separated by a cooldown lap. 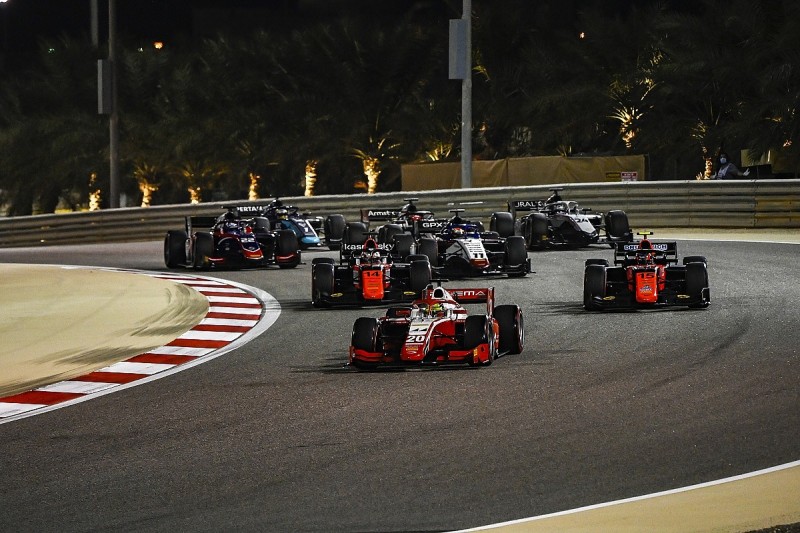 Schumacher got caught behind Marino Sato at the end of his first push-lap, and bizarrely tried for a second successive flier, despite the majority of the field cruising around on the congested circuit preparing for their final efforts.

He outbraked Sato into Turn 1, compromising his line, but still pushed on, and even pulled off a risky dive on Marcus Armstrong into Turn 6.

Still the desperate Schumacher pushed on, and passed Roy Nissany on the straight approaching the final corner.

He then moved left to claim his line for the turn, but had not cleared Nissany, and as a result collided with the Trident car, which was launched over Schumacher's rear wing in a spectacular crash.

The session was again halted, this time for good, and Schumacher is under investigation for the incident.

Behind front-row pair Tsunoda and Mazepin, Jehan Daruvala made it three Carlin-run Red Bull Juniors in the top three, and he will start alongside Shwartzman, who by failing to take pole has slipped out of title contention.

Felipe Drugovich bounced back from an off on his very first hot lap to take fifth for MP Motorsport from ART Grand Prix's Renault F1 Junior Christian Lundgaard.

Artem Markelov took advantage of HWA's early second runs to leap into seventh, and he will share the fourth row with DAMS-run Williams protege Dan Ticktum.

Alongside ninth-placed Ilott will be the Charouz Racing System car of Louis Deletraz.